On Saturday, 16th June and for the third year in succession, the Alfa Romeo Owners of Kent and East Sussex staged a display of cars at Hever Castle near Edenbridge. The event was open to all owners of Alfa Romeo cars and it was supported by our main dealer, Thames of Tunbridge Wells, and by Chris Knott Insurance. There were about two hundred Alfa’s on the castle’s lawn.

The formality of introduction over, what about the impressions! It was a day on which superlatives could really not go far enough! Every time our club visits Hever, the castle and gardens reveal a little more of the characteristics which make this a very special place. This year with the trees in full leaf, and just a little larger than previously, it was the intimacy of the grounds that impressed. There were quiet picnics in the shade, friendly conversations among small groups of enthusiasts, meeting perhaps for the first time, and then there were reunions of old friends all brought together by a shared passion for Alfa Romeo.

The moat sparkled and the castle stood as a sentinel beneath a blue sky. It was easy to imagine that, for centuries, groups of folk had gathered in the castle grounds as we were doing to discuss the affairs of their times. Hever was the home of the Bullen or Boleyn family between 1462 and 1539, a period of great change and, of course, a period which, in the late 15th century, overlapped the life of Leonardo di ser Piero da Vinci.

The great man is quoted as saying “Simplicity is the ultimate sophistication” which is a statement which resonates throughout the natural and scientific world and it applies to so many things we see and touch. Take the Alfa Romeo Giullietta Spider of 1956 for example. An example of this beautiful machine equipped with a very rare factory hard top sat beneath a very large copper beech tree and looked stunning. 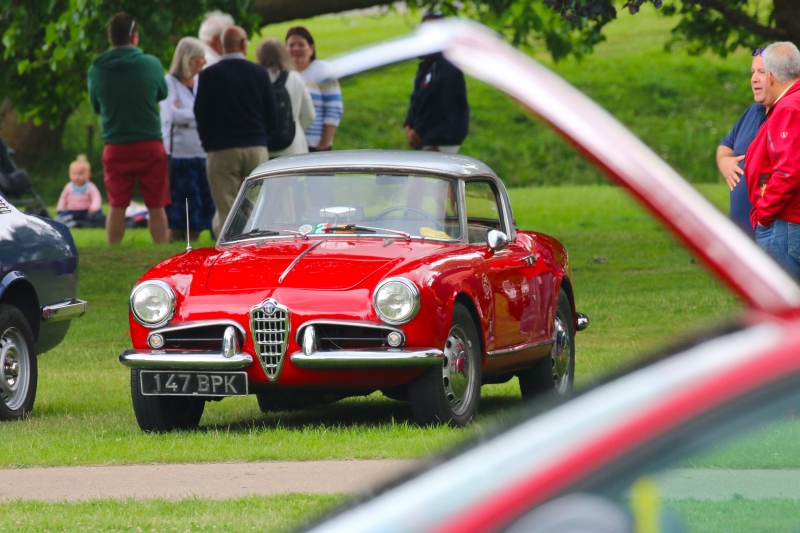 The Giullietta Spider sums so many of the reasons why people are passionate about the Alfa Romeo car. Discrete elegance and style which transcends a mere automobile body to become an statement of art. The design and mechanicals were both simple but sophisticated at the same time.

At Hever there were cars of special quality. An example was a beautiful white 2600 Spider by Carrozzeria Touring from 1966 which sat next to a gleaming 156 (European Car of the Year in 1998) at the front of a long line of white and silver cars which formed part of our BIG BADGE display. The 2600 is just the automobile in which to arrive at the door of the Hôtel in Cannes while the 156 is a very sophisticated modern classic. 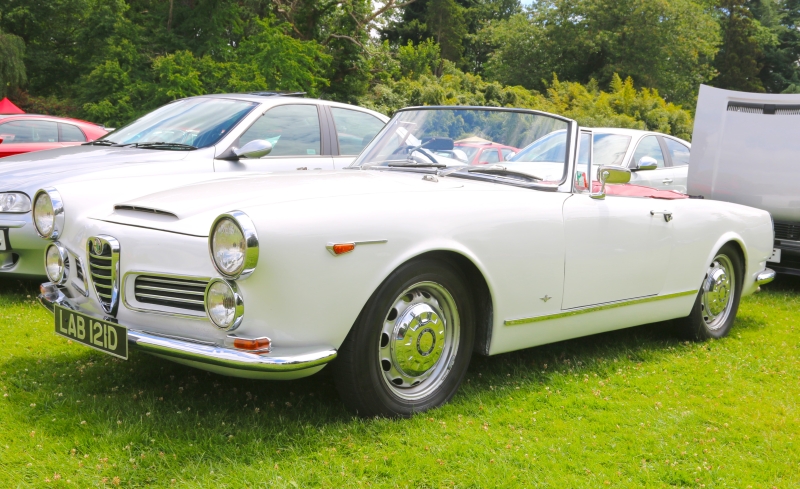 The cars were parked in a formation which would have been fully appreciated by anyone flying into Gatwick that Saturday afternoon. The overall scheme featured a Milanese Cross and the Biscione across the lawn sloping down to the castle. 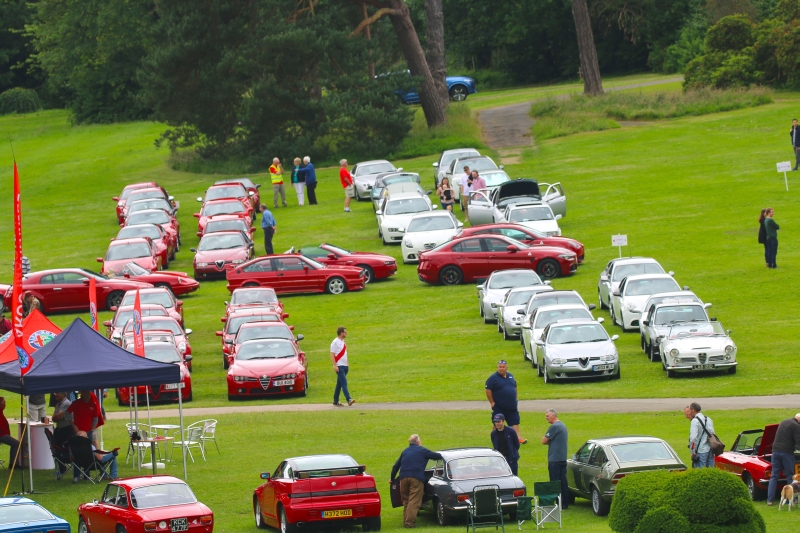 Our annual concours was, as usual, a very difficult event for the judges. This year our regular scrutineers Mark and David, staunch Alfa Romeo owning members, were joined by Finlay, a guest from the BMW Car Club. Now why was that I hear you mutter? The reason is simple. Our guest judge has a Masters in Automotive Engineering, works for an Italian company, knows a nice car when he sees one and the effort that has to be put into bringing a vehicle up to a good standard … and he is my son!

Choosing cars to fit the prize categories was no easy task. Almost every Alfa Romeo was shown off to a very high standard indeed. Some cars were presented very much in a reflection of their owner’s personal taste and there is nothing wrong in that. Our Kent Alfisti are not sticklers for originality when it comes to maintaining a car. Just keep it going and keep it smart!

The car judged Best in Show once languished in a barn in Pennsylvania. Believe me the photographs confirm it was a real basket case when Peter Boarer rescued the vehicle and had it shipped it to the UK. It must have felt like a real leap into the abyss for Peter but now it is a stunner! Methodically restored as a practical classic and an absolute delight to see on the road. 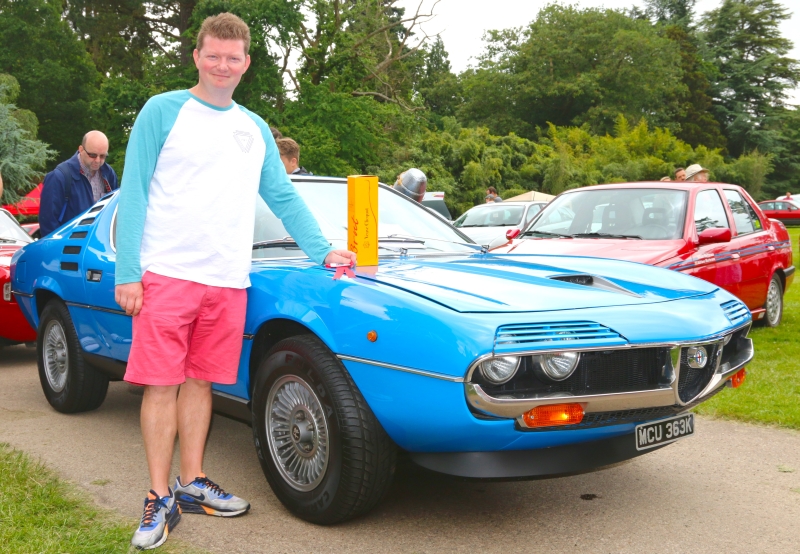 The Pride and Joy prize this year went to Richard’s 1600 Giulia Super saloon, a two owner car with a full service history from new and a logbook recording every journey it has ever made. After many years in use, the car was sufficiently clean and tidy to feature in a launch poster for a more modern Alfa Romeo. The Giulia Super is true the embodiment of a simple looking yet very sophisticated car. 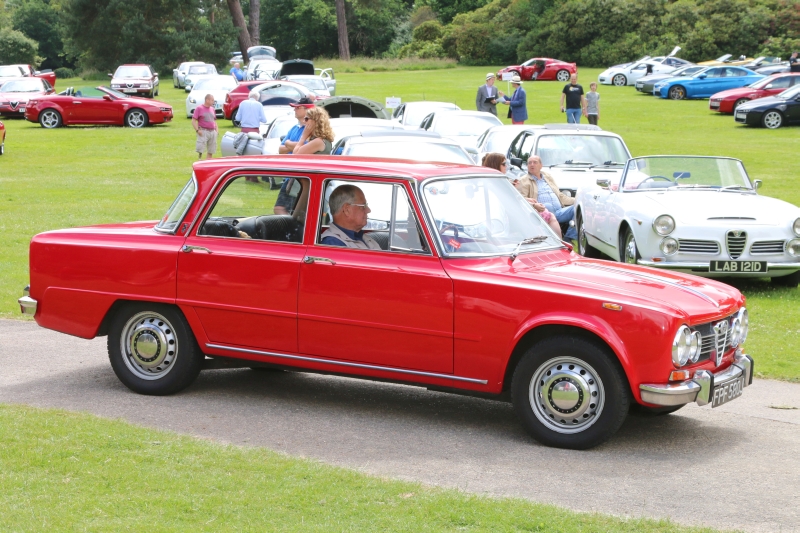 Then there was Reuben who took the unofficial prize as “Best dog in show” while his owner Craig Archer presented his 1968 Duetto 1750 Spider. The car was the Judges favourite. Craig advises that it was assembled from what he describes as “a box of bits”. 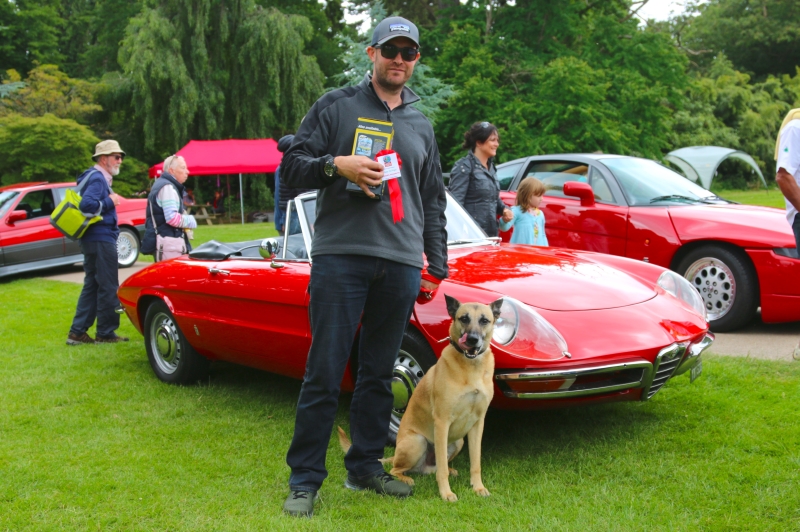 The Duetto was purchased as a “project” from Classic Alfa back in August 2016 and the work began in earnest in October of that year. The bodywork involved new floors, drivers side rear quarter panel, rear inner arch, door, post and front wing, new sills all round, a front lower panel and repair panels along the passenger side. The engine had a complete rebuild with new weber carburettors, new cams, piston rings, liners, water pump and cam chains. The gearbox was split and checked over and the rear axle was completely rebuilt with new bearings and seals.

Everything else (front and rear suspension, dampers, carpet, rubber mats, interior trim, dash top, soft top and frame, brakes etc) was either reconditioned or replaced with new parts, even down to the wiper motor which was overhauled. The triumph of the project was realised with a new MOT and the car being on the road in May 2017. There are some bits to finish but Craig can feel justifiably proud of what is a wonderful car.

As well as cars which had been rescued and fastidiously rebuilt to their former glory, there were many cherished machines on display which had survived in original condition. A right hand drive Alfetta 1800 saloon from 1975 was my particular favourite in this category and was another father and son owned car. The bodywork was without a blemish having protected from new against corrosion.

Other rarities included a top of the range Green Cloverleaf 24 valve 3.2 litre 164, a very tidy Alfasud Sprint and an SZ. The 164 and the SZ were sheer drama to behold both having  road presence which can be described as pure opera on wheels. Just listen to The Grande March from Aida to appreciate what I mean. The Sprint was another example of simplicity and sophistication to which the appropriate accompaniment would be from Nabucco Act III, The Chorus of the Hebrew Slaves.

The cars were the stars at Hever but the event attracted all manner of support. Mark and Craig discuss the finer points of Alfa Romeo ownership with … some ducks. 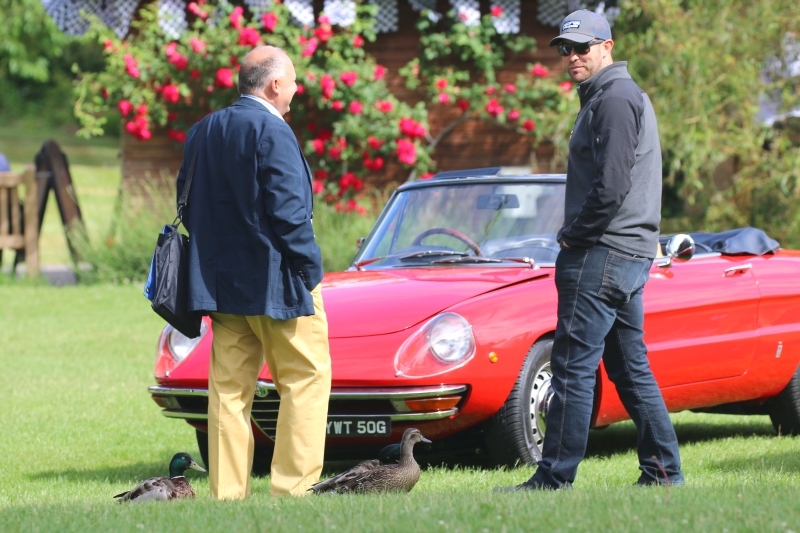 The Kent and East Sussex section of the club would like to thank everyone for coming and making this a truly great day out and a wonderful celebration of all things Alfa. We must also thank our official photographer Chris Francis who captured the moment and the atmosphere perfectly, our marshals who parked cars with great enthusiasm and precision and all those supporters who provided assistance and backup. Thanks go to Nick who brought the club membership display, Peter Williams from Thames of Tunbridge Wells who donated a prize to a concours winner and brought some nice cars to show (and sell – that 4C was a lovely car at a very competitive price) and Nick Day of Chris Knott Insurance who also donated a prize to a concours winner.  Together with the members and our guests we made it a memorable day. Leonardo would have been amazed. 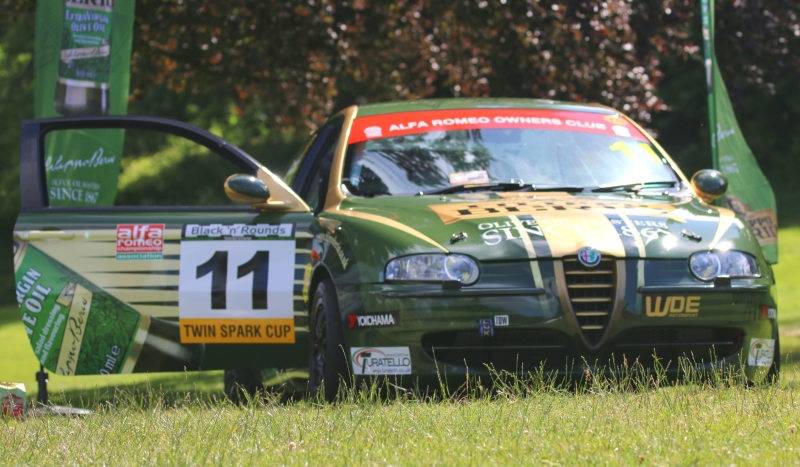 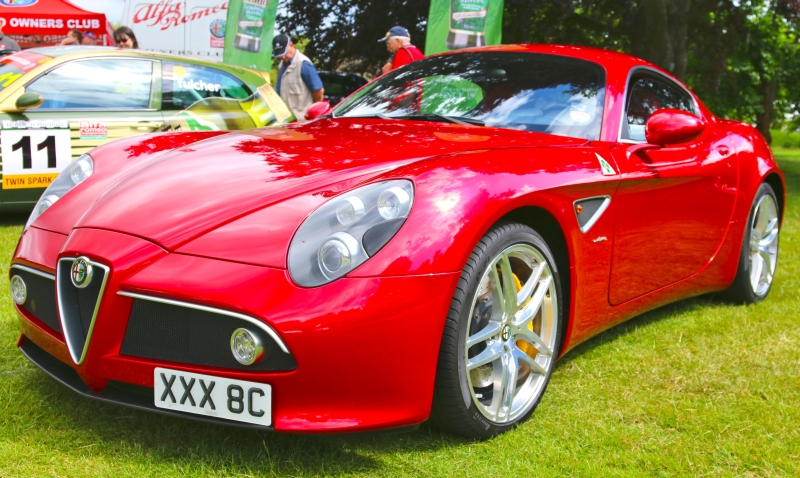 Where else could you find a spectacular racing car, parked next to a beautiful 8C Competizione and an Alfetta 1800 saloon.

The stunning 8C was amongst us and we had 4C’s displayed randomly together with new Giulias and Giullietas. Later in the day the Giullietta boys were able to move their cars closer to the castle to enable some photography with the moat and castle as a back drop. Now that has given me an idea for next year … see you all then.