I have never been to the Battle of Britain Memorial at Capel-Le-Ferne but I had known about this Classic car show since the beginning of the year and booked in January. It’s not a show that the club tends to visit and last year was a bit of a washout so member attendance was likely to be a bit sparse. That said the weather forecast was for a glorious hot day with onshore winds to cool people down – so why not? The power of the AROCKES own Facebook page was utilised and resulted in three definitely, one for later due to having to change disk brakes and one AROCKES member that I had never met before but owns an Alfa Sports wagon that I totally failed to get the name of and I mentally kicked myself for not asking, totally unforgiveable! Even better all partners agreed to attend and it made for a well chilled and enjoyable day.

The history and genesis of the site spans some 75 years from when it was a heavy gun emplacement dominating shipping in the channel during the war. The idea for a Memorial at the site started with Wing Commander Geoffrey Page who was a hurricane pilot with 56 Squadron and after he was shot down in 1940 and received horrific burns. He went on to rejoin his squadron and was again shot down late in the war again receiving horrific injuries. The idea for the memorial was born at that moment and was eventually opened by the Queen Mother in 1993.  Geoffrey Page died in 2000 and the iconic statue was added just before 2015 when it was unveiled by the Queen.

The statue itself was carved by Harry Gray and although was destined to be that of a WWII fighter pilot the actual design eluded the sculptor until his apprentice, one day, broke for lunch sitting contemplatively on the floor and the concept, of the design we see today was born. 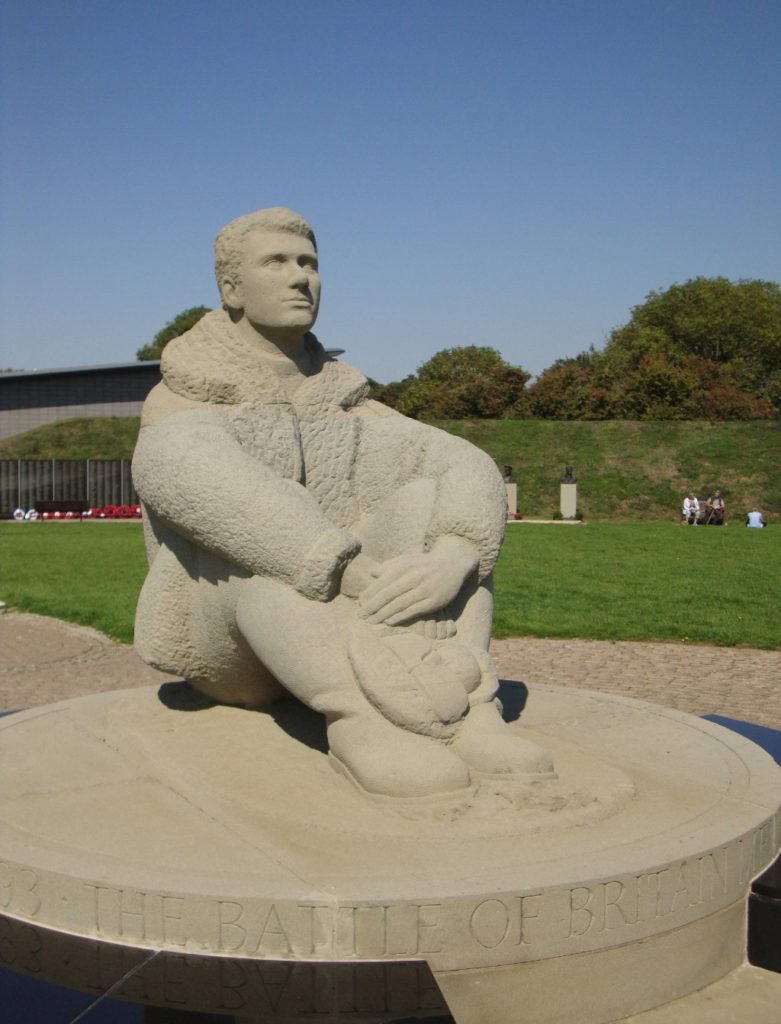 Over 110 cars attended and Craig Archer was there first with his 1750 Spider and later joined by his girlfriend Michelle. I was next with the MiTo and Sue. We all physically reserved a place, with the aid of the marshals and strategically placed chairs for Tony Twyman, his partner, grandchild and Tony’s GTV. We were all then able to park together in the age old AROCKES tradition. We were later joined by Nick Koleszar who brought his 147. This site could easily accommodate over 300 cars and I can see it becoming quite a feature in the future.

The site itself is an unprotected cliff top location and the setting, ambiance, weather and atmosphere was stunning. France was clearly visible as was Folkestone and the remnants of the now decommissioned nuclear power station at Dungeness. In short the location was perfect and was serviced by the cafe, a state of the art museum called the “Scramble Experience,” and the usual trade stands including the essential bacon butty and coffee stall. The butty’s were a tad expensive at £4,50 and Craig demonstrated he had the resistance of a chocolate fireguard by buying one 20 minutes after finding out how much they cost. I blame it on the delicious aroma of gently sizzling rashers and sausages which is irresistible. Personally I only lasted around 30 seconds but some people are made of sterner stuff than me when it comes to the price of a bacon butty. The appearance of a lone Spitfire buzzing the Memorial all day added to a fantastic atmosphere and each time it appeared everyone stopped to look. 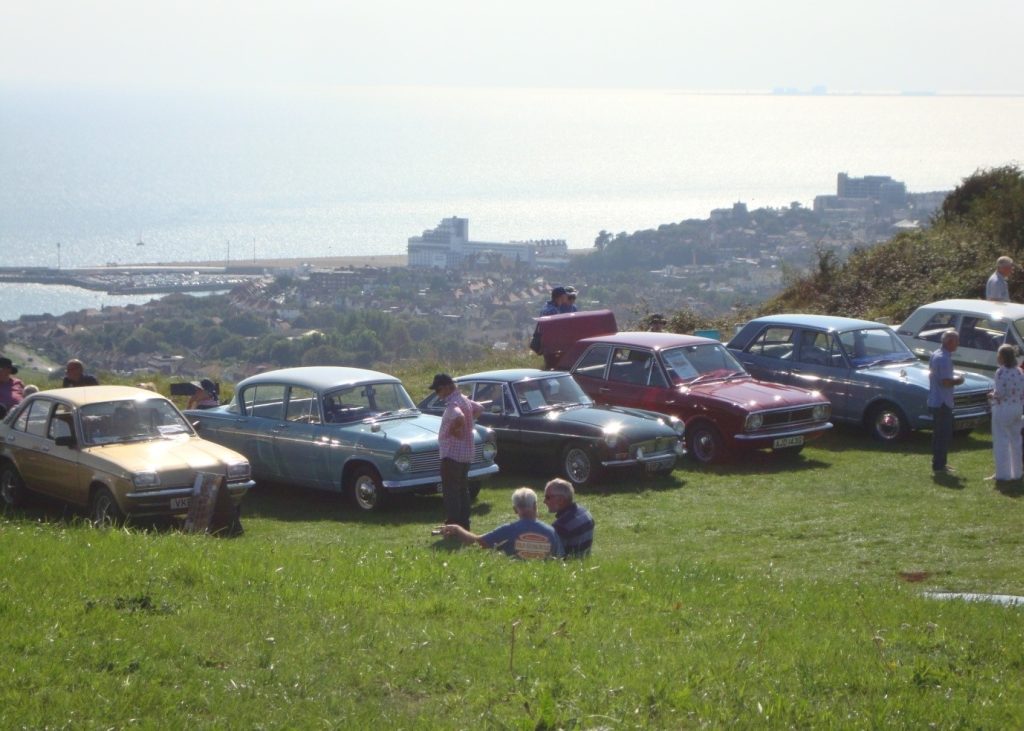 Tony’s grand daughter was kept amused with tons of toys spread all over the place and if it’d been my front room I would defiantly thought I had been burgled. She is such a little smasher! 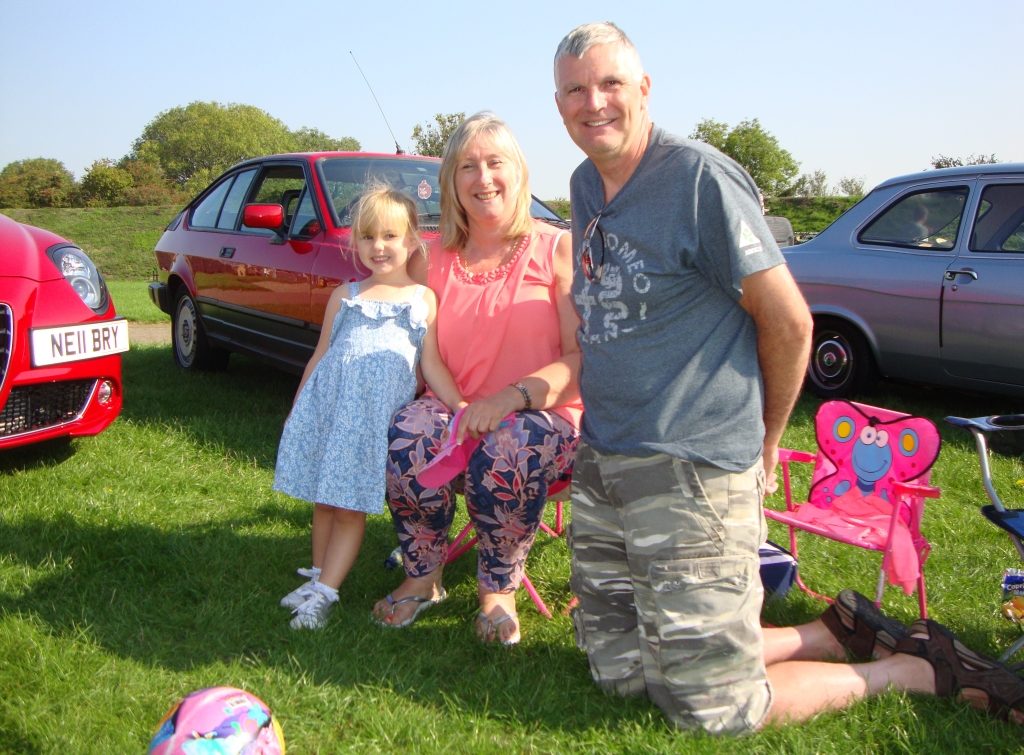 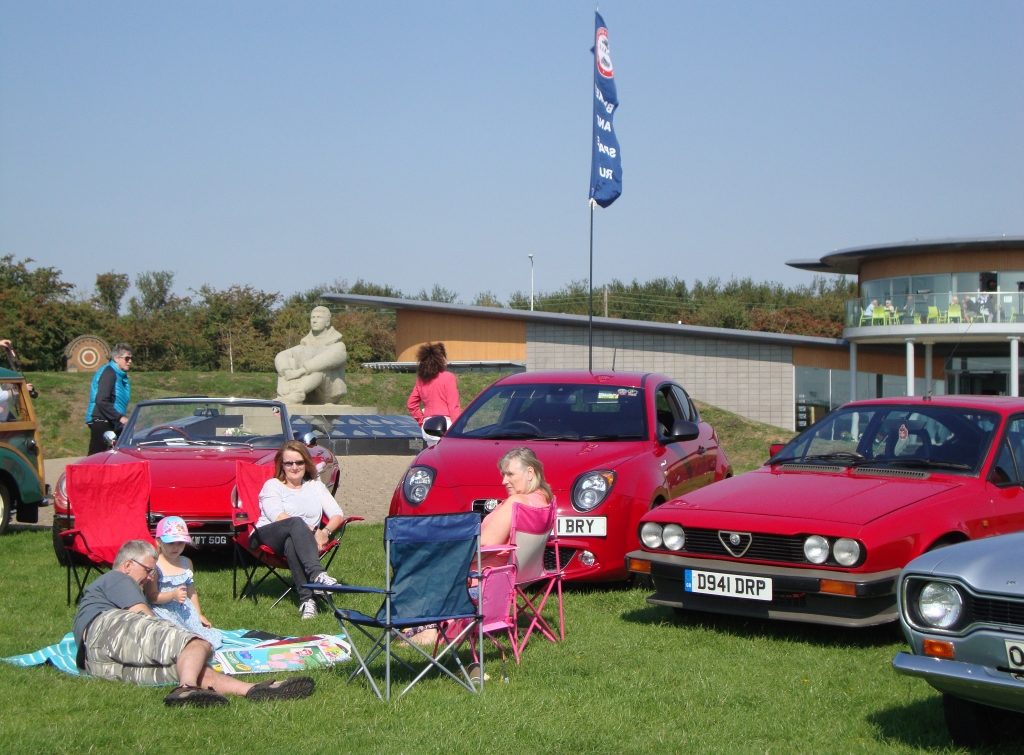 There were some pretty amazing vehicles and I had a soft spot for an MG T series that had a fuel tank vertically mounted at the rear, outside the car in front of the spare wheel. There was also a Volvo P1800 very similar to the one that won runner up at the Grand Old Timer Rally in August, but this time in grey with a lot more bright work. 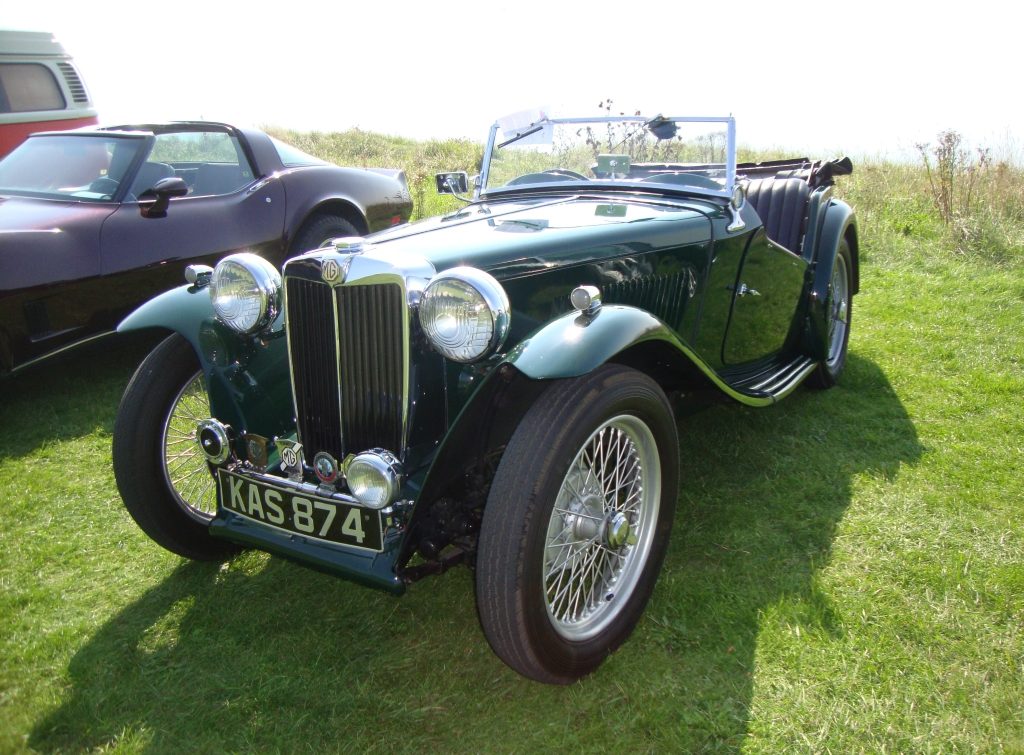 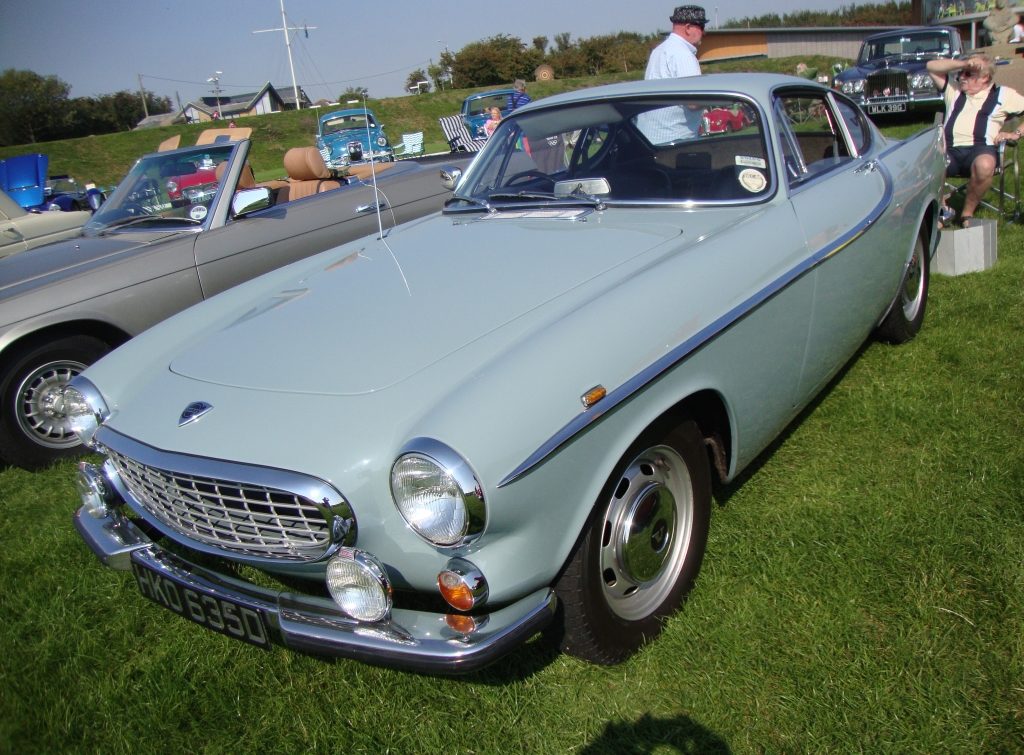 The star of the show, however, really had to be the setting and the photo really does not do it justice as a lot of the cars were out of view. The cost of entry was not exorbitant either at £4 (£5 on the gate) and an ice cream on the balcony of the 1st floor cafe gave a great panorama of the site, the channel and all the cars. Sue had “legged” it from the balcony with her Magnum as she was attracting the attention of some envious wasps eager to share her vanilla double choc chip calorie fest of an ice cream. 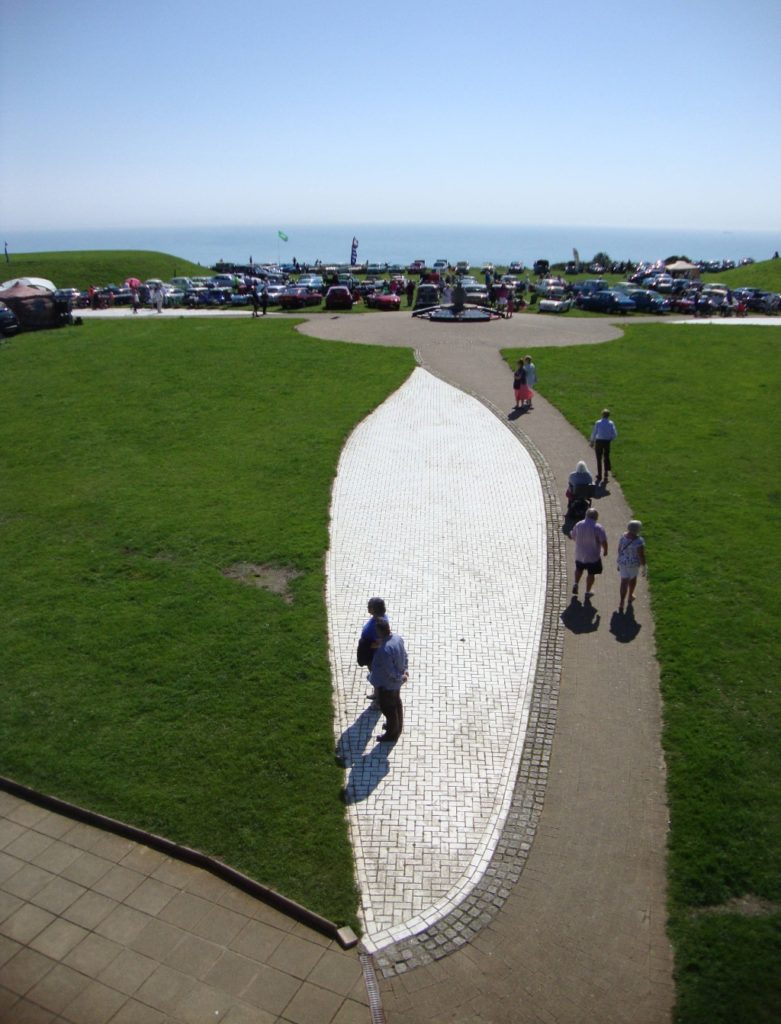 I can easily see this show becoming very popular in the future and as stated there is easily enough room for over 300 cars here. I have to admit this was one of the better shows I have been to and weather permitting will definitely return to. The nice touch at the end of the day was the prize giving with a really well crafted trophy for the judge’s decision of best in show. As shows go this was a good day out made better with partners being there and all having a good time as well.