This year MSV at Brands Hatch really pushed the boat out to the club and not only offered 50 show car places but this time a passenger could come for free as well. As you can imagine the clamor for places was very keen and Jeff Kaby was kept very active constantly changing the list of people and cars attending. He had put in a lot of work to get that concession. Hats off to him he really had to work very hard for what was possibly the last shiny show of the season before a lot of our cars get moth balled until next year. The weather was warmer than expected and there was a very welcome early heat to the day and it’s not often that you see T shirts on the last day before October. I had put out a last minute “call to arms” for biscuits as I had forgotten to buy any and Amanda and Dave Norman came up trumps on the day having possibly bought out the entire stock of their local corner shop. Even Jeff Kaby was impressed when he tried it on and asked if there were any cakes and promptly nearly fell off his chair when Jaffa cakes were produced. Whether the Jaffa is a biscuit or a cake is the subject of a whole separate debate but suffice to say you can’t get one past the ever sublime Normans and a very big thank you to them!

Our club was sited and was displaying just off the Clark Curve and we had a perfect vantage point for the finishing straight. There were 50 highly polished Alfas all lined up and gleaming in the sunshine. We were parked on gravel and right opposite the gravel trap and yes you guessed it, things got dirty but more of that later. During the day there were rounds 28, 29 and the finale, round 30, of the ever popular BTCC series and this saw Rob Austin and the AROC sponsored Giulietta finish 15th, 9th and 3rd respectively in these last three rounds. This ensured a podium spot at the end of the day. Overall in the series Rob Austin finished 14th with 126 points. The overall winners of the series were 1st Colin Turkington for team BMW with 304 points, Tom Ingram 2nd for the Speed Works Team with292 points and 3rd was Tom Chilton for Team Shredded wheat (He must have only had one that morning) with 266 points.

During the BTCC first round of the day, number 32, Ethan Hammerton in his VW Passat left the track at the Clark Curve and travelled sideways along the whole length of the gravel trap right in front of the AROCKES lineup. The combination of the wind being in the wrong direction and no rain for a week led to the inevitable dust cloud like a sand storm in the Sahara, which descended onto our display covering everything with dust. A sterling piece of detective work, by Dave Norman and Jeff Kaby who revealed the guilty culprit. Having reviewed the video on our AROKES Facebook page and watching the recording of the event from the T.V. I don’t know about anyone else but I had spent the whole of Saturday polishing my car and if I ever come back as a seagull there is a certain VW out there which has my name on it! 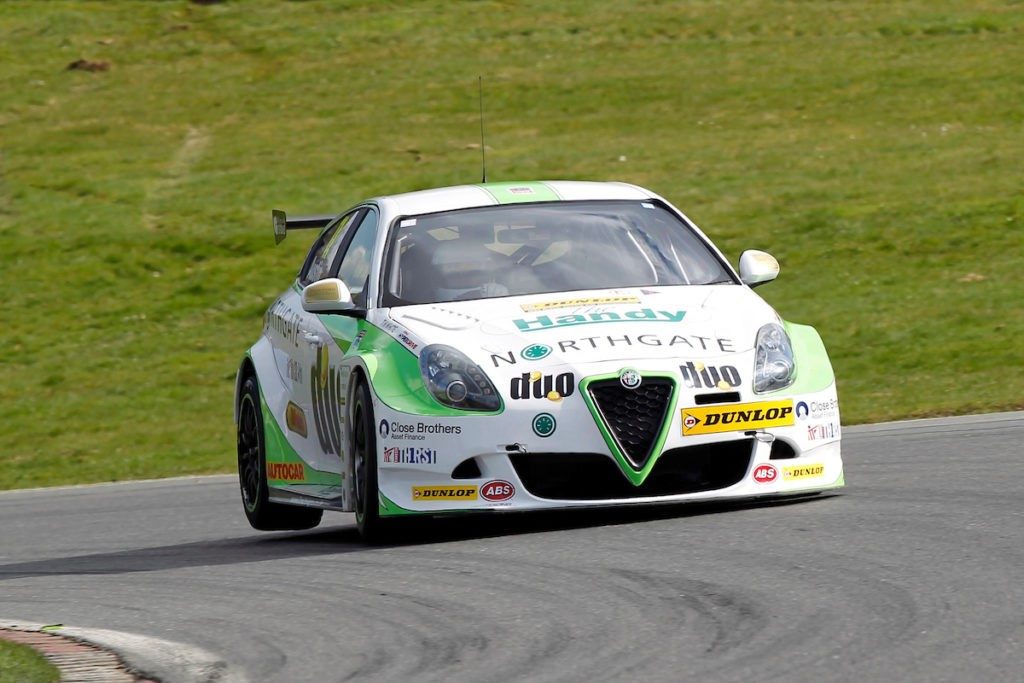 The finale itself was a real nail biter with Rob Austin in the Alfa Giulietta starting in pole position and being the finale, the gloves came off for a podium position. The series winner having been decided in round 29 when no one could match Colin Turkington for points. Cars were line abreast round corners and no-one was willing to give ground. The Giulietta having to concede 3rd place in what must have been a photo finish between Ashley Sutton, number 1, in the Subaru and Josh Cook, number 66 in the Vauxhall Vectra. As it happens Ashley Sutton was deemed the winner. 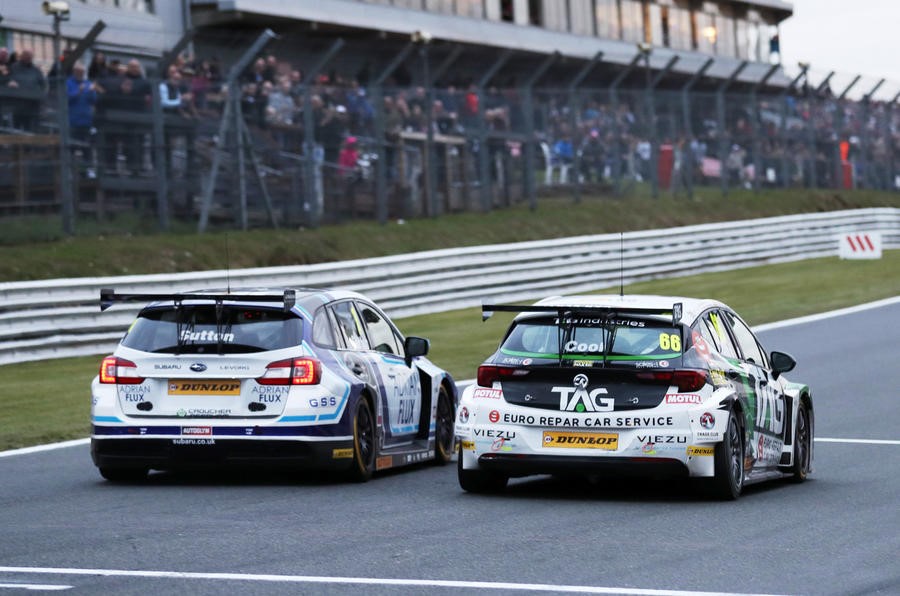 I managed to get a picture of our display vehicles pre-sand storm and it certainly looked like an impressive display from 50 of our more than 260 members. I of course took the opportunity to sell as many club badges and stickers as I could for club funds. These are selling steadily and can still be bought mail order from our secure club page shop. 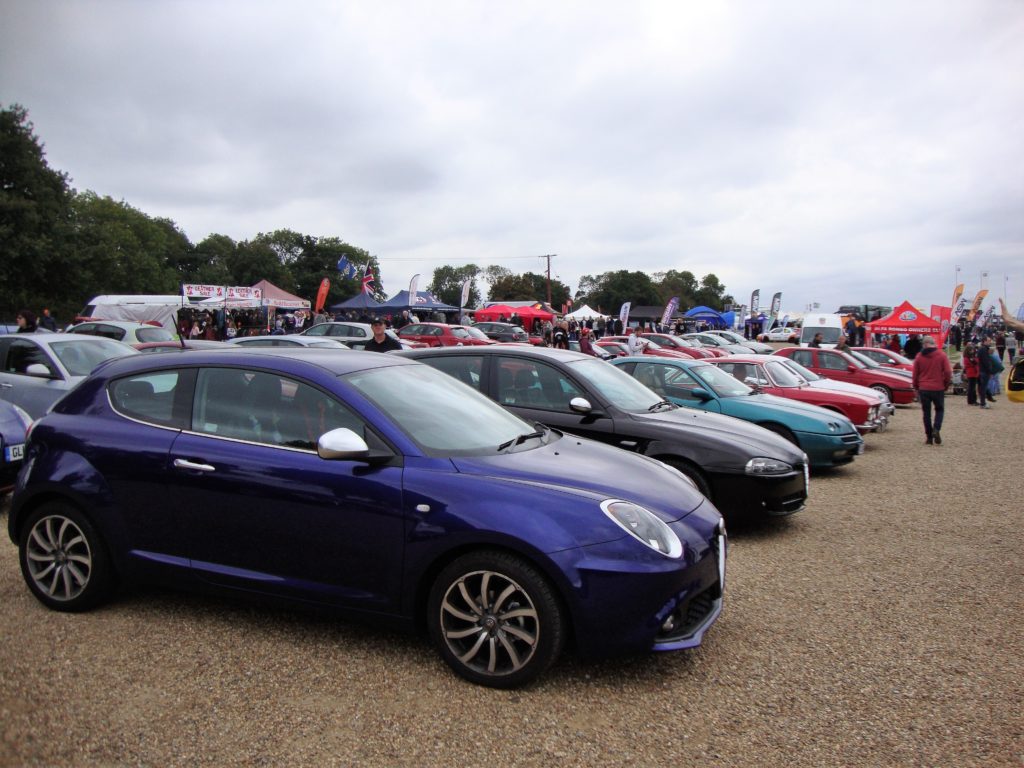 Now I do consider myself quite good at selling things and being quite shrewd but I certainly met my match with Richard DeCruz. I still do not know what happened and I’m still mystified by it but he bought three badges and two stickers. Somehow I ended up owing the club funds twenty pounds and walked away with an Alfa T shirt that did not fit me! No amount of reflection has equipped me with the insight as to what happened during this transaction?

I was not the only person who was busy during the day and Nick Wright the AROC manager had taken a snap of me interviewing one of the newer members to the club Harry Sutton, about his 4C, for this article and it can be seen here between the red Brera and the blue Montreal. 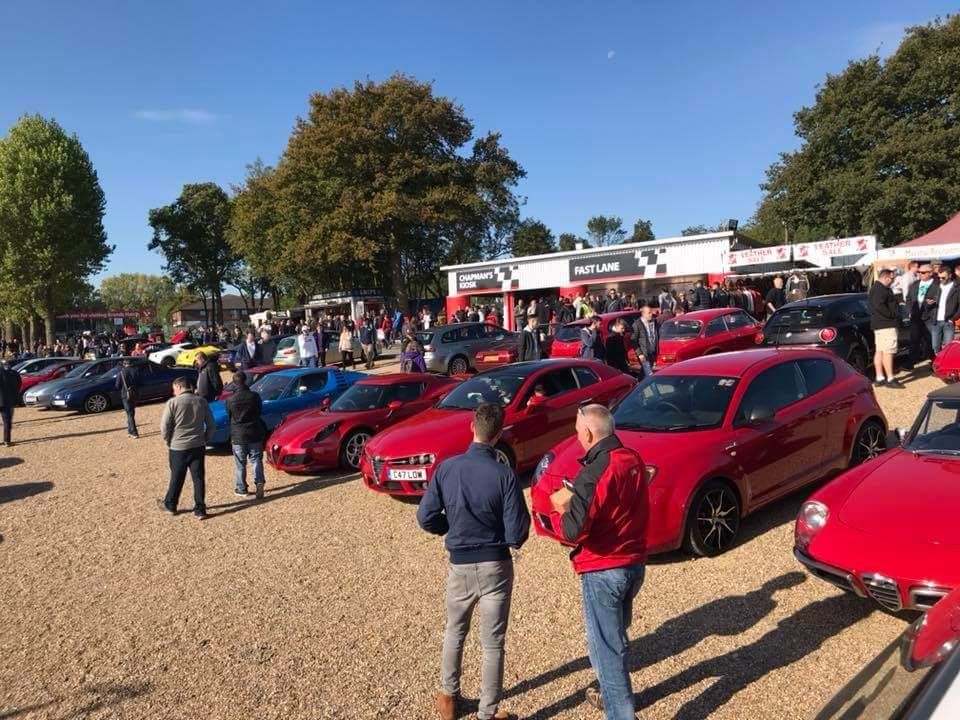 Now Harry, who is a Foreign exchange trader in the city, does consider his 4C a cherished possession which he has owned for just over a year, just before joining the club and having bought it secondhand for 34,000 pounds from Targa Florio Cars near Chichester. He readily admits to having had to work very hard to afford the car which he mainly uses at the weekends. The car is very regularly driven and he has travelled a very enjoyable 4,000 miles in it. Ever since being at secondary school he had fallen in love with the marque and his first vehicle was a MiTo which he misses very much and got him into Alfa Romeo in the first place. Harry’s first sighting of a 4C was at the Geneva Motor Show and he never thought he would ever actually own one.

The car itself is, as Harry described it, is a metallic red and look as we did could not find the colour code for the type of red the car was painted. I know John Dray found his colour code after looking everywhere for it and I will have to ask him where the code sticker was located. Harry’s 4C has 18 inch teledial wheels at the rear and 17 inch at the front. It is fitted with a straight through race exhaust with no muffler, which, Harry assured me was road legal and was fitted with a catalytic converter. Heading up the exhaust was a 1.75 litre engine with what I can only describe as a rather large turbo and the whole ensemble nestling neatly amongst more carbon fibre than I have ever seen. The power to the wheels being put through a TCT gearbox, that incidentally has two clutches. The whole car is stripped right back to basics and Harry was rather disparaging of the fitted mirrors but at the same time admitted to just loving the vehicle.

As a foot note I also had to add that Harry did not escape being sold a badge and window sticker either. 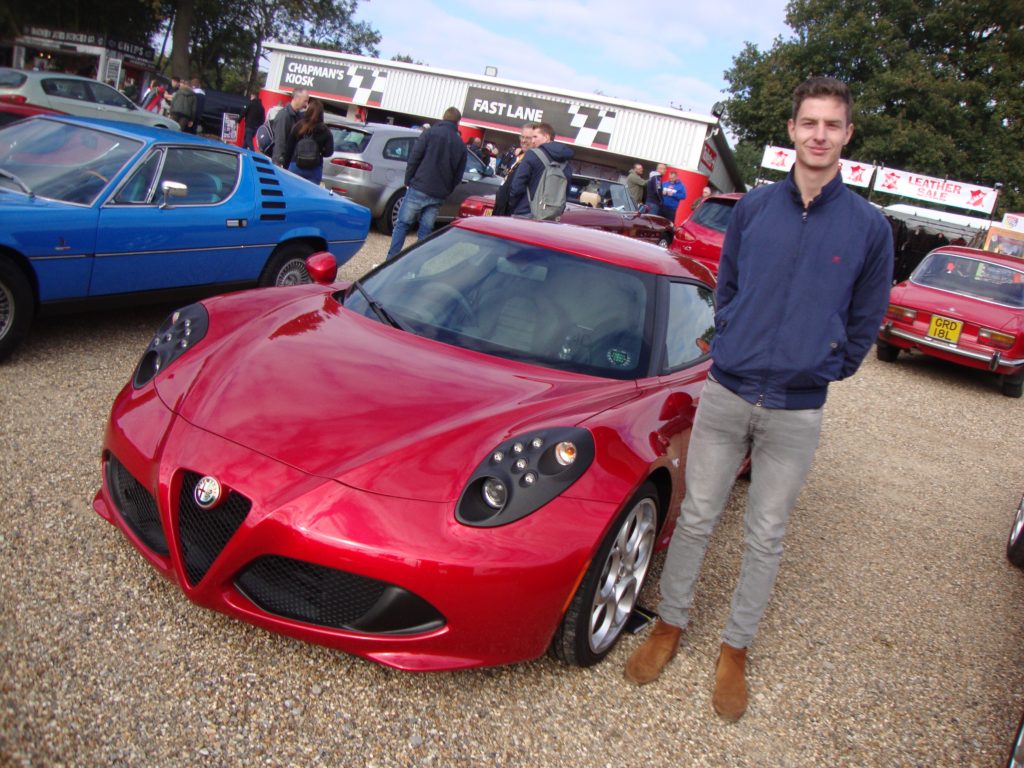 Ever since the start of the season I have been trying to get to chat to another of our section members and this would be the ever so infectious and bubbly Ali Jarman who is a MRI Radiographer. This car has a bit of a history and we thought that it was going to the great Alfa resting place in the sky after what we thought was a crash that would see the car written off last year. The Spider was hit at about 40MPH in the rear nearside quarter at a notorious junction in Whitstable that saw the rear axle shunted to the offside leaving the car shaped like a banana. It took a tenacious owner and a sympathetic insurance company to see the car totally rebuilt at Ian Stamper’s Autobritalia near Dunkirk in Kent and re-painted by Steve Ebheart at the paint shop next door.

Ali’s 1993 Series 4 Spider was bought around fourteen years ago from Kinghams in Croydon to celebrate her 10th wedding anniversary and was imported from Germany but still is right hand drive. The paint code for the colour is sheer poetry, namely, “Rosso Winner Micallizzato Red,” and I would certainly agree with that! The interior carpetry and lining is comprised of a material called Alcantara in beige and being one of the uninitiated this was described to me as mock suede and apparently a bit of a “pig” to clean. The steering wheel was rather special being the classic spoked wooden one and that was a present from Crippen, her sadly missed partner of many years.

Ali disclosed that it was not an uncommon car but was great to drive since the crash as it now really felt planted to the road and we discussed whether this could be down to replaced suspension assemblies. There have been other articles on this Spider and Ali had great pleasure showing me the piece from The September 2005 edition of The Classic and Sports Car magazine.

Incidentally, the elusive, “Chalky” Whyte was spotted in the rear of the picture below whilst Ali was posing with the Spider. I am reliably informed Chalky’s Alfa is a 159 Sportwagon although not obvious from the photo. 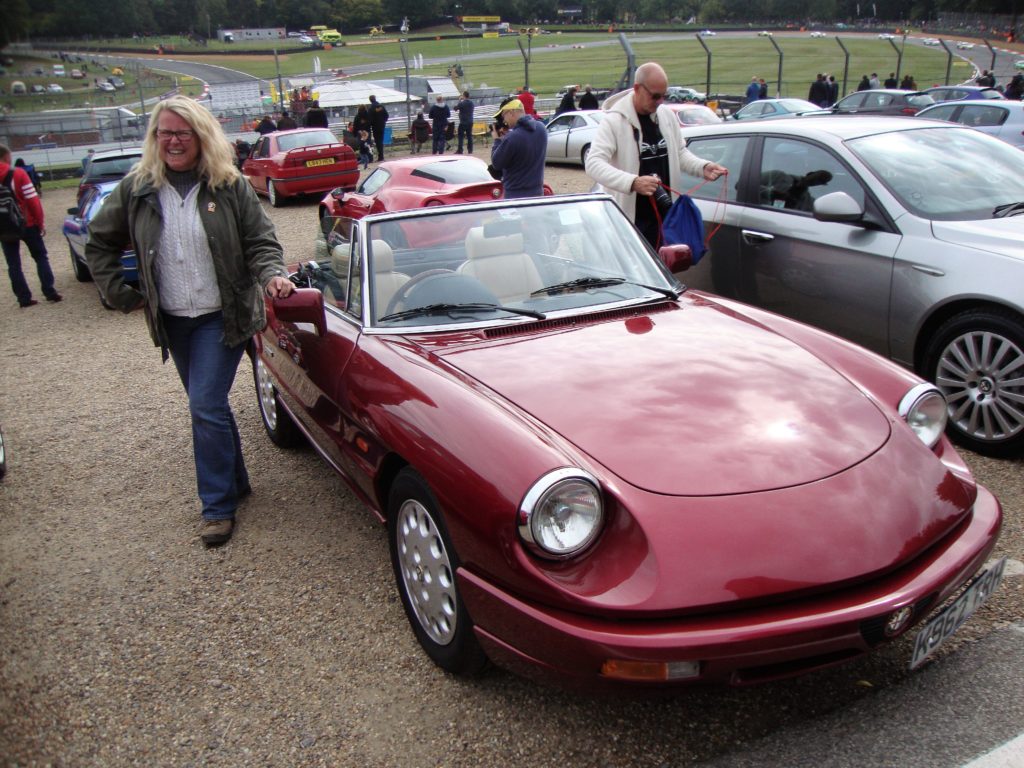 The engine in Ali’s Spider is an Alfa two litre double over-head cam and the main stay engine plant for the Alfa Romeo stable for many years in it’s various guises. The ignition being either a Bosh K-jetronic or a Motronic, Ali was not quite sure which although did say that that assembly was somewhat cobbled together and someone here may well be able to make sense of the picture below and let us and Ali know what the components are. 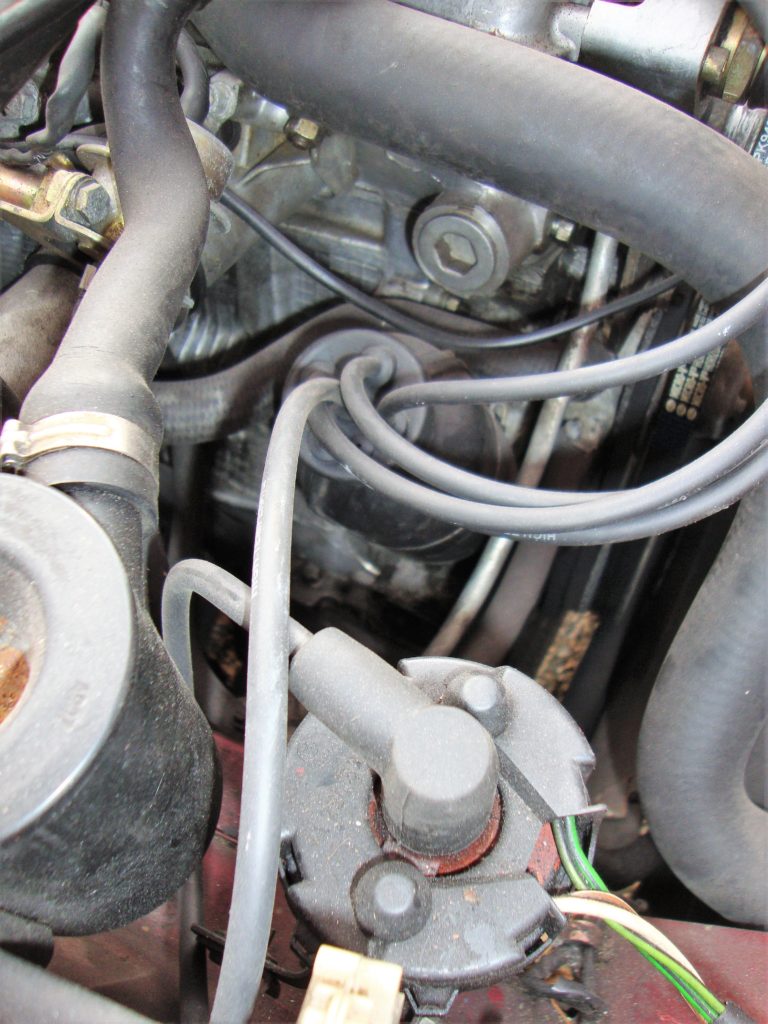 Ali has owned a whole host of Alfas including a 33, 147, 156, MiTo, GTV and a Giulietta but describes the Spider as a, “Pretty pretty car that just makes you smile.” You just can’t argue with that as sitting in it she just broke into a big grin. 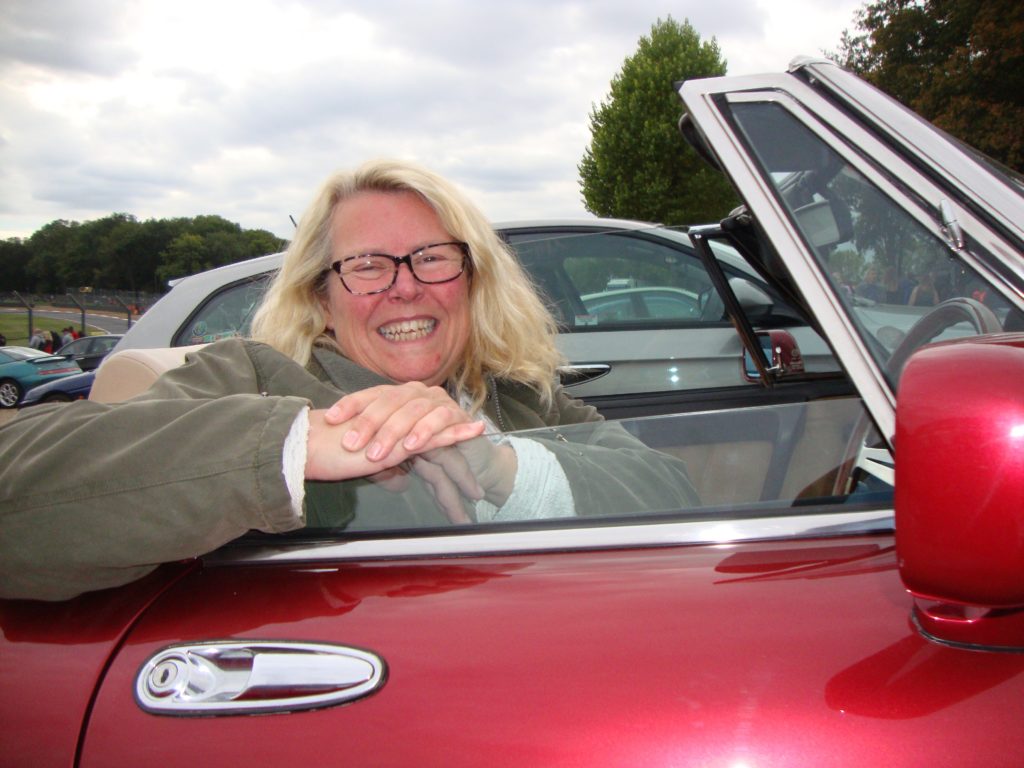 Well that’s about it for this show season although we do have the drive out and lunch to look forward to, Quiz night with refreshments paid for out of AROCKES funds. The monthly meetings, AGM and the Post Christmas Dinner that more than likely will be in the private dining suite of the Moat so we will not be disturbed by other parties. Some of you will remember that this is the same room we held last year’s AGM.

It’s been a busy season and now the committee will be turning to tasks more administrative. We have next year’s events to plan and will be trying to go to, at least a few events, farther West to encroach into E.Sussex. The Eastbourne show was one that was mooted and hopefully we will meet more members there next year. The Doug Hodson Memorial Trophy is progressing into the procurement stage and a model has already been produced. What we need now is a base and that hopefully will be some sort of gear from an Alfa gearbox. The main part being the grill from a 1972 Kamm tail Spider and an accurate badge has already been sourced for the same year. Craig Archer has very kindly offered to be the main stay of the construction and hopefully that will be finished by April. The plan is to have the whole trophy chrome plated and the missing grille bar would match Doug’s ethos on life.

Those of you that are concerned will be relieved to know that the twenty pounds, I owe the kitty, has now been placed in the badge box, albeit I’m twenty quid light!

Anyone want an Alfa T shirt?

Hoping to meet you all again soon and as they say, “Ciao.”