I always enjoy the drive down to Whitstable to the Chris West Car show and it’s this one that I tend to enjoy the most. This year’s was spot on the nail, the early morning mid-Summer sunshine giving a concrete certainty that today was going to be a hot one, there was hardly any traffic and I could really enjoy my car. An onshore wind onto the Tankerton slopes off the back of a rising tide would cool us all down in what was going to be a real hot one with temperatures rising to the 30s. These thoughts were instantly put to one side as the hands free phone started to ring; I did not need to answer it as I knew instantly what was wrong. I had forgotten to wait for my wife before setting off and I was in trouble! The telephone conversation confirmed how much trouble & I was brought back to earth more rapidly than Newton’s apple. I am usually always in trouble, it’s just usually the depth that varies & it’s usually my fault. To cut a short story shorter, normality was, ten minutes later, resumed and off we went arriving at Tankerton slopes to the image that I had imagined earlier. Over 600 classic cars filled the whole length of the slopes and a cool breeze blew which was to reduce the heat of the day later on.  This year however something different was happening. The low tide and ongoing climate change on the beach had revealed a group of people that turned out to be archaeologists’ after a bit of exploration Sue revealed all. 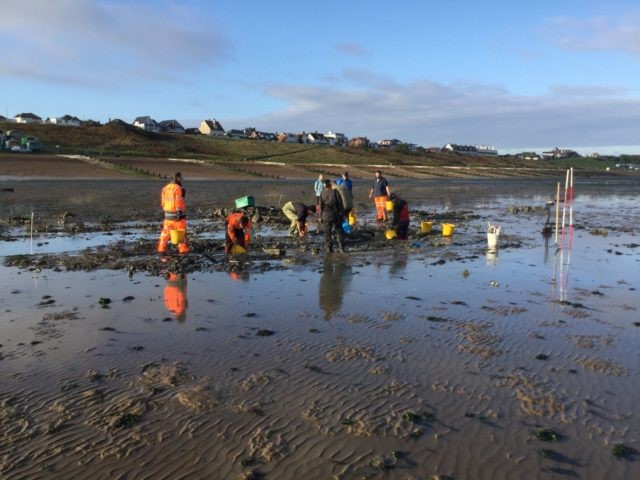 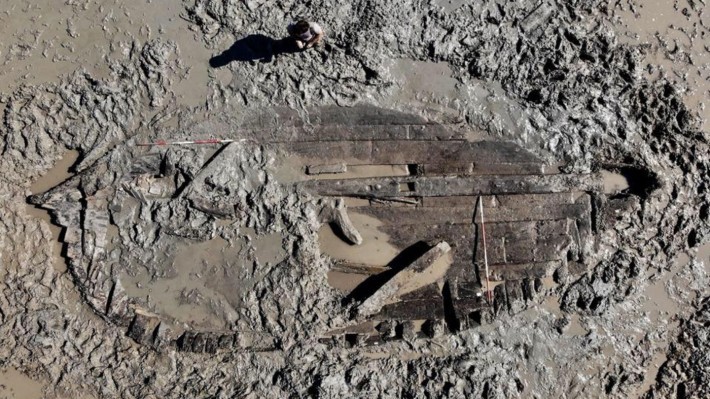 It turns out that a shipwreck was being excavated with dated back to the 1500s and Tudor times. It was in fact the wreck of a possible slave ship on what was once a tidal salt marsh. Later research on the net showed that the ship’s Oak wood came from a wood in Southern England and had been felled in 1531.

This was the back drop to the show and the tide was ever creeping forward from an extra low tide to slowly cover the excavation site. The invaluable gazebo was slickly erected in record time by now very experienced and practised club members who are used to it’s quirks and were wanting somewhere cool to sit in the breeze.

There was a good turnout from the club and some of our newer members attended In Particular Nicola and Adrian Fielding and their son with their sparkly Stelvio. 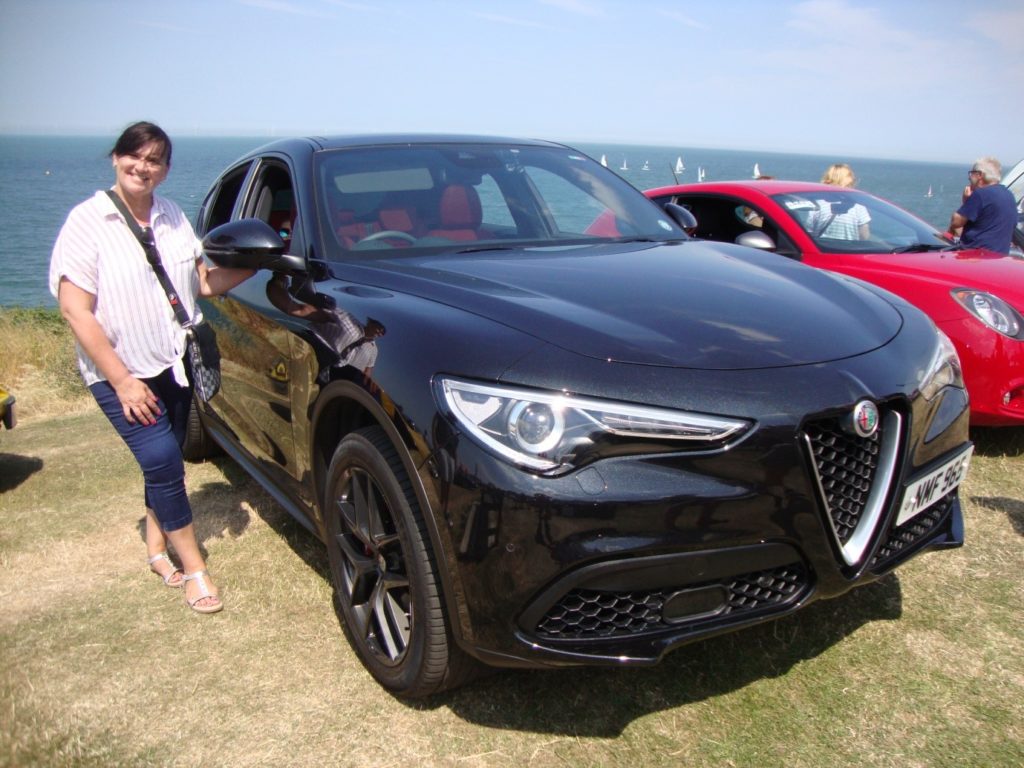 Adrian Fielding and his son got to sit in John Third’s 4C and very obviously enjoyed the treat. The only other person I know that has got to do this is Jeff Kaby our secretary. Jeff again had a highly polished spider and only the second occasion I have known to be as shiny and lovely it looked too, parked with the sea in the background and the sun reflected off the bonnet. Amazing what you can do with a soft cloth and nothing else.

Steve Geary, who can always tell a good story about his colourful and highly amusing past, was selling his Spider and I discovered that since it had an “F” above the Pininfarina badge on the rear quarter means it was one of those made in the Pininfarina factory not the Alfa one. Steve incidentally was selling it with or without the wheels which had just been subject to quite a spectacular referb. 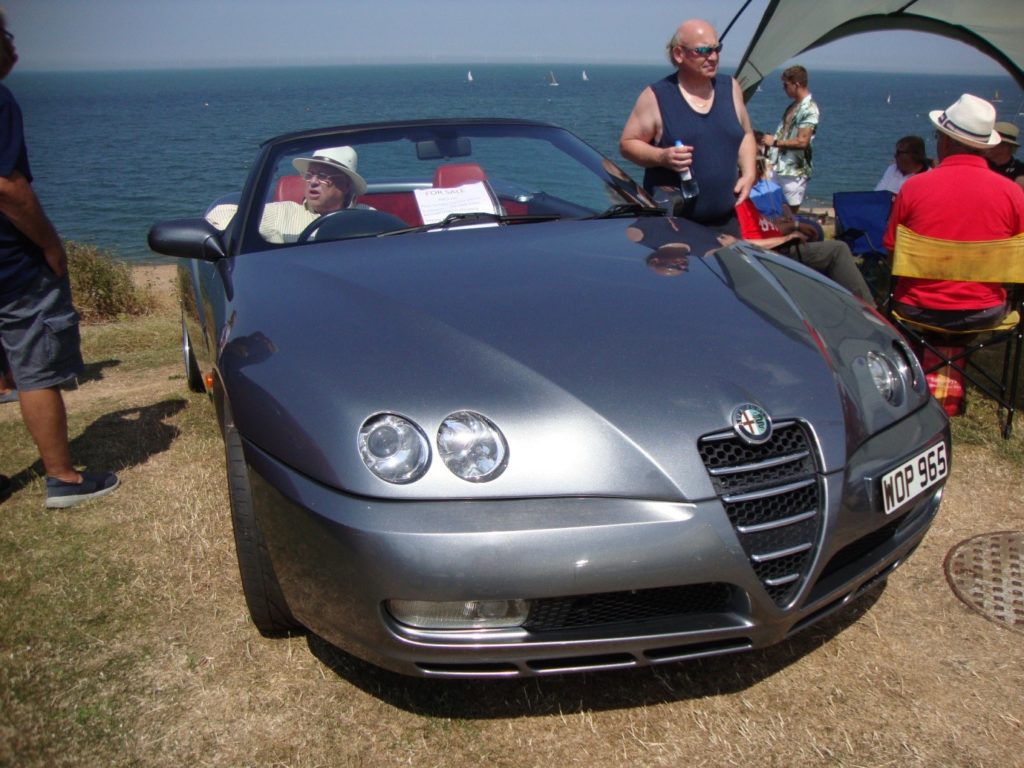 Graham Duplock with his 105 turned up a little late and we had to steal a bit of space from the unsuspecting display opposite. Planting the flag sealed possession and while the display started to fill up space became a bit of a premium. This led to a bit of creative parking from Mr & Mrs Norman in their yellow Spider, ever sublime, no one noticed  as David quietly brought off a particularly inspiring piece of parking behind the wrong side of a concreted in bench between Jeff Kaby’s Spider and another of our Alfas. 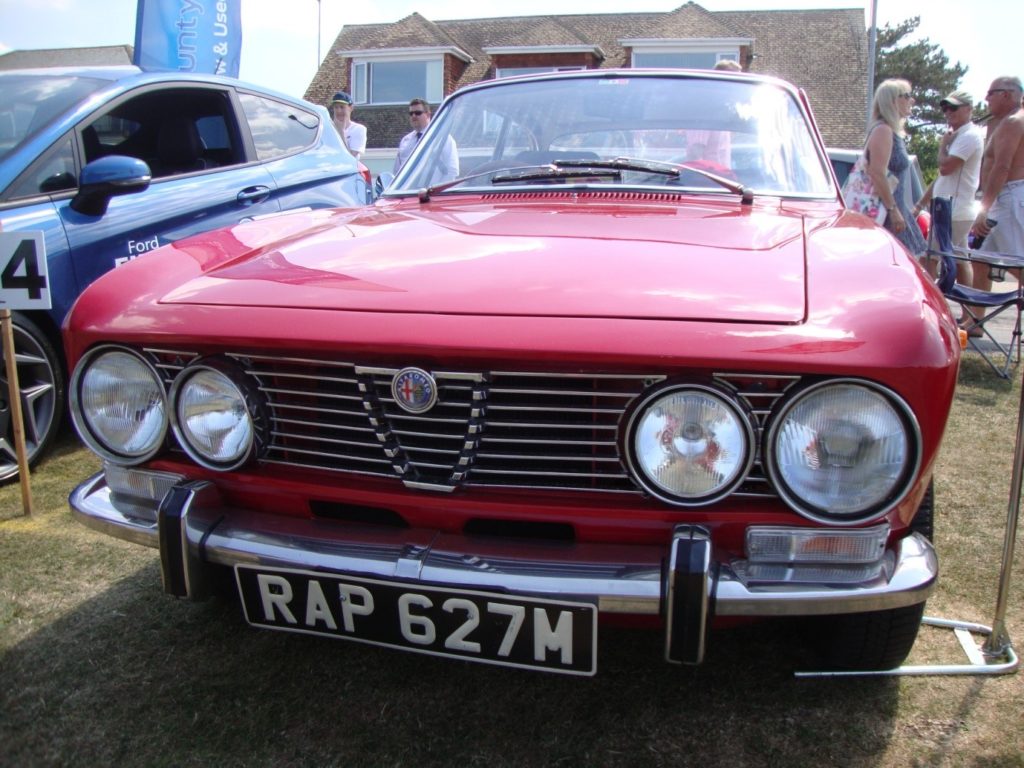 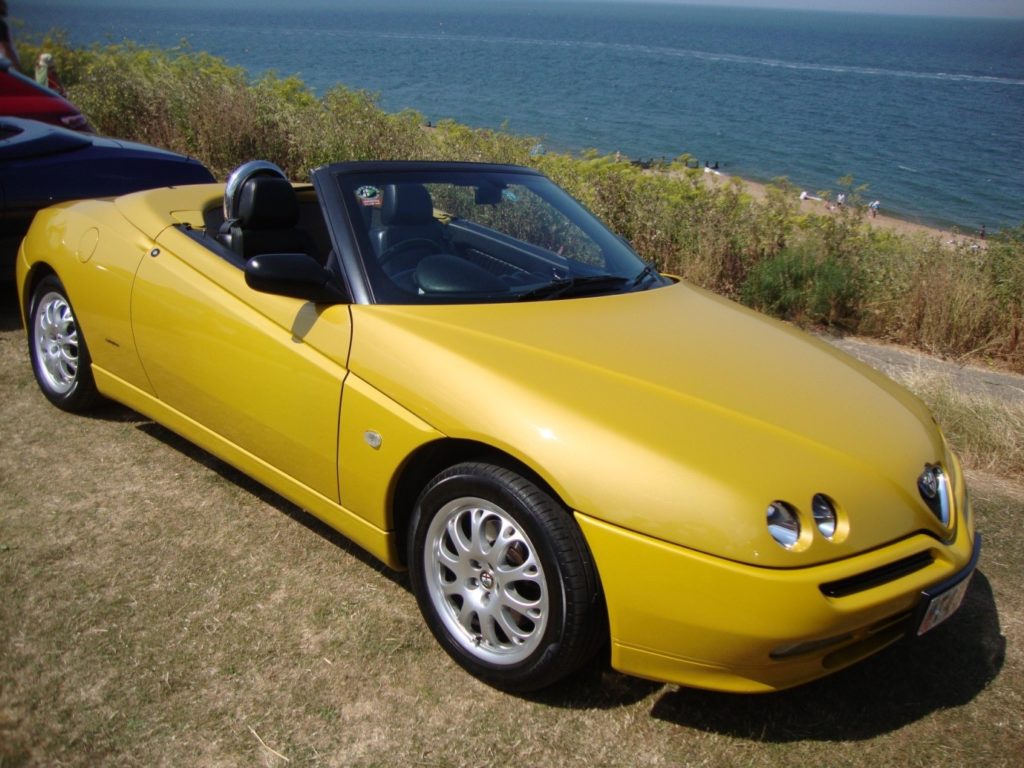 Craig Archer was there in his prize winning 1750 Spider and was as ever helpful in welding some tent pegs for a series of flags that the club will be using for displays. I don’t think this will be the last of the restorations that Craig will present at the club and by now should have taken delivery of his second 1750 project. 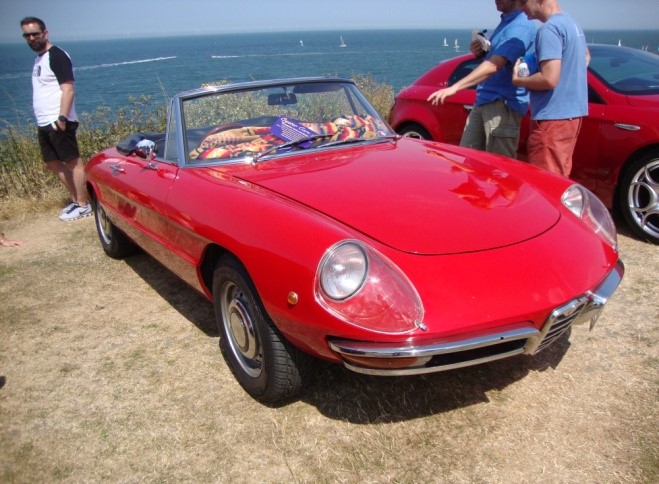 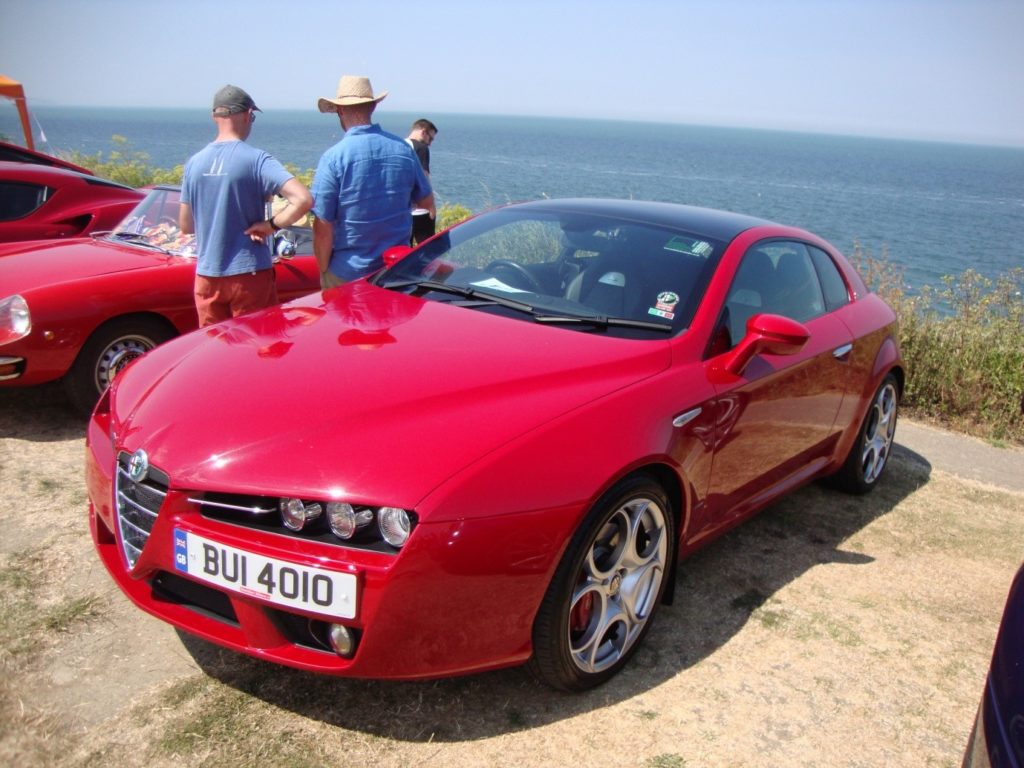 Keith Barker was there with his Brera which was nursing a bit of a dent after a slight argument with his garage door post and I dutifully took a photo at the correct angle to hide it & save blushes. The gazebo as always is worth it’s weight in gold and Keith Barker, Amanda & Dave Norman as well as the “Big Fella,” John Third can be seen here making good use of it. 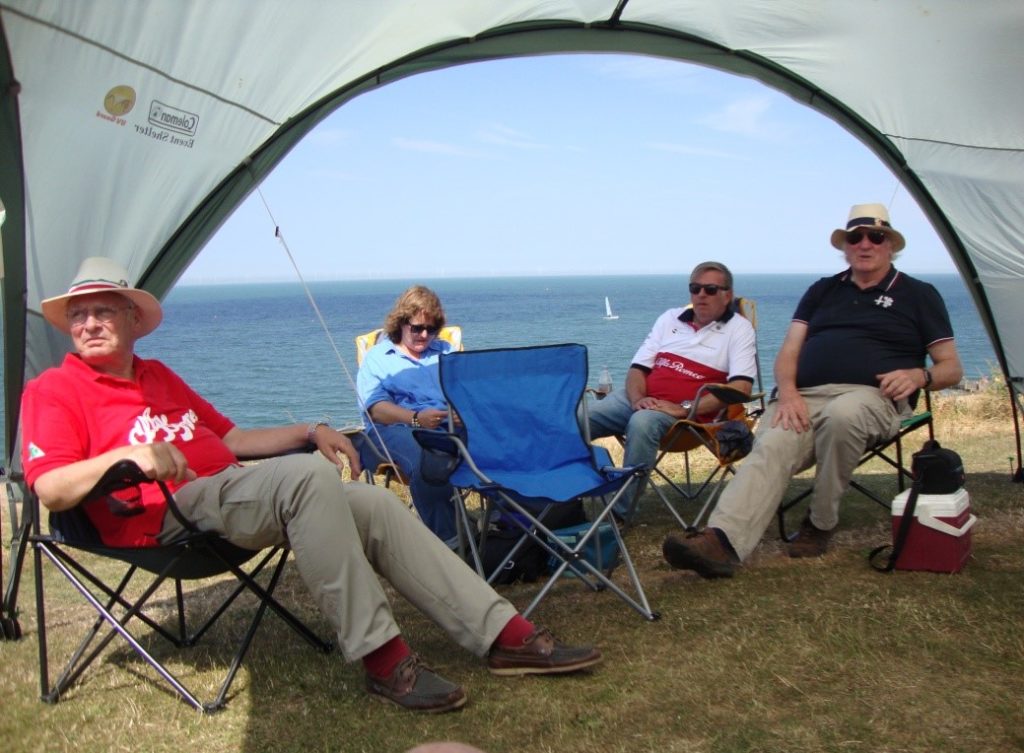 As always the Whitstable show was great, I was glad I put the fridge in the boot and had a constant supply of ice cold fizzy and after everyone had a good old nose about the show, most of us wilted to the shade of the Gazebo to gaze out over one of Kent’s lovely vistas. Everyone stayed later at this show but by 1630 me and Steve Geary were the last ones standing in an almost empty seafront. It was a really good day out and highly recommended. It remains undisclosed as to whether Steve sold his Spider but there certainly was a lot of interest in it during the day and I would not be surprised if it has already gone to another new owner. There were some good stalls at the show and Sue bought one of the smallest 500g anvils I have ever seen and other tools for her jewellery making hobby. I shall be looking forward to next year and hoping for more good weather on the day. Lastly is it just me or can you actually see the curve of the earth on the horizon in these photos?