The Brands Hatch circuit is just a couple of miles away from where the section has its monthly meetings at the Moat Public House. It’s got a big car park and it came as no surprise that a member of the AROKES Facebook page suggested we did a convoy run into the event. Over 50 AROCKES Alfas had booked for the event and a good number met up at the pub. The Giulietta register had also turned up with the same idea so when we got going there must have been 30-40 Alfas all in convoy and a magnificent sight it was with Alfas of every type driving towards Brands. At least a few people looked up from the pavement distracted away from their mobile phones whilst walking the dog, collecting the papers from the newsagents or heading towards the corner shop for breakfast milk. Entry to the event was seamless as always and Brands now have an internet booking system for display vehicles which is vehicle specific. Gone are the days when you could give a ticket to your mate if you could not go … progress as ever moves on relentlessly. 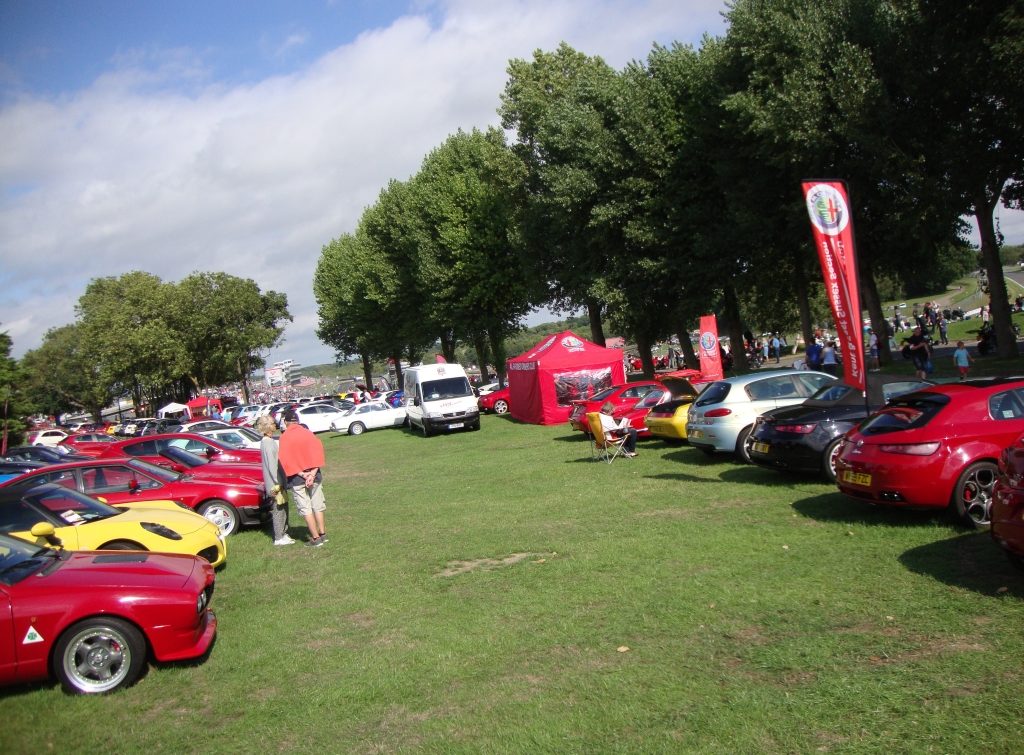 I had come armed with my box of AROCKES enamel badges and car stickers and later on made a bit of a killing for club funds. We had ordered a hundred badges and twice that number in car window stickers. They sold well throughout the day and are proving to be a welcome boost for the club. Sadly I had forgotten my stove and could not make anyone a cup of tea like I usually do. Prices for tea, coffee and food at Brands being astronomical. I absolutely refuse to pay £6 for a burger or exorbitant prices for drinks. I had a bit of a wander round the stalls to see if there were any interesting goodies and I have to admit I was a bit disappointed by the Italian market, especially since I had come to restock what I had bought the previous year from a well stocked and esoteric selection of Italian delicacies. A certain brand of chilli olive oil, biscotti and a type of spaghetti I really like. There wasn’t much selection at all and to be greeted by a 12 year old stall attendant, quite obviously from the eastern counties and more interested in anything other than serving me, who informed me, “Naaw mate, don’t do it,” settled it for me as this was supposed to be an Italian market. Personally Sainsbury or Aldi is now a more preferable choice as it does actually stock those items.

Later on I went for a bit of a wander with Jeff Kaby down to the paddocks where the racing Alfas were all lined up and met up with David Faithful the AROC MiTo registrar as he will be employing a driver, Ben Sharich, to race his MiTo QV in the 2019 series. I’ve been following the genesis of this vehicle towards this goal and it’s now registering 203 BHP, a stripped out back end and due to have the suspension upgraded to race spec. He had also paid for the day’s racing for Stacey Dennis who was driving the pink and black 147 in exchange for the low down of what Alfa racing was all about. Sadly it spun off the track at the first race at the paddock bend and got a wrecked front end with every orifice in the car filled with gravel. Thankfully it took the mechanics only a couple of hours to rebuild the front end and get Stacey racing again in the afternoon. That did not put Mr Faithful off, although he did express his trepidation, the Mito being his pride and joy for the last few years. I am really looking forward to Ben’s progress next year and managed to get a cheeky first signature, as well as a cheeky freebie goodie, from David for my Mito.

We also happened to bump into a certain Michael Linsey who was prowling the paddock looking for stories to include in his race commentary for the next race. Many older members will remember Michael Linsey as the ex-secretary of AROKES over 15 years ago. Michael now works as a race commentator at Brands when any Alfas are racing and I imagine has his fingers in other pies as well. 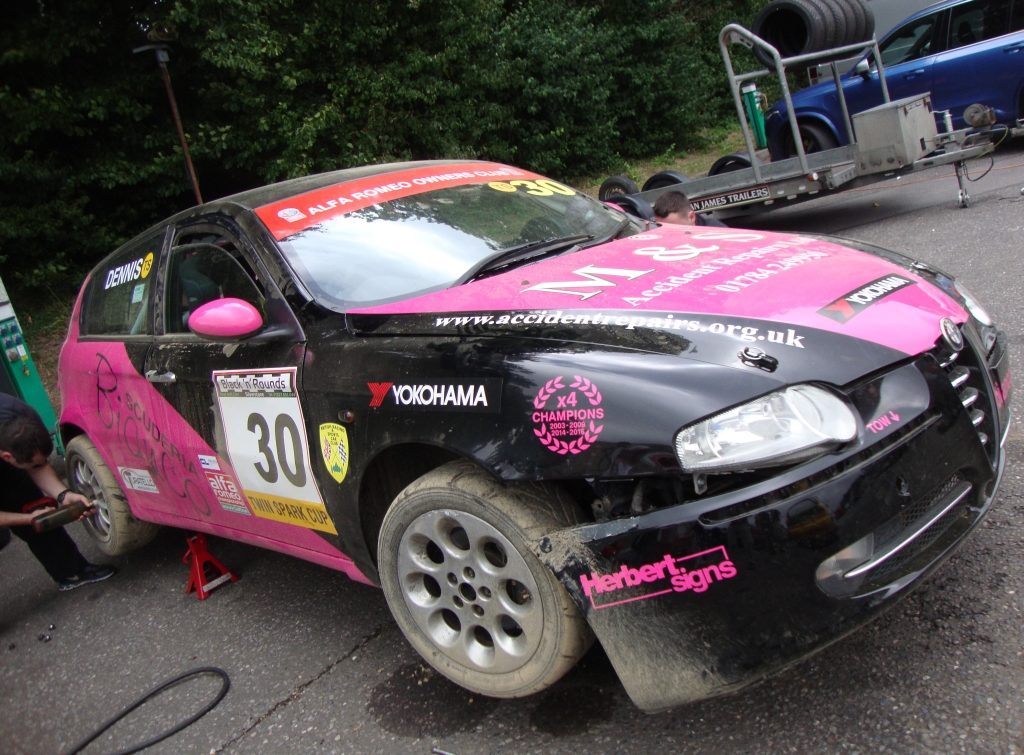 David Faithful’s MiTo QV and possibly the last we will see of it in this incarnation. 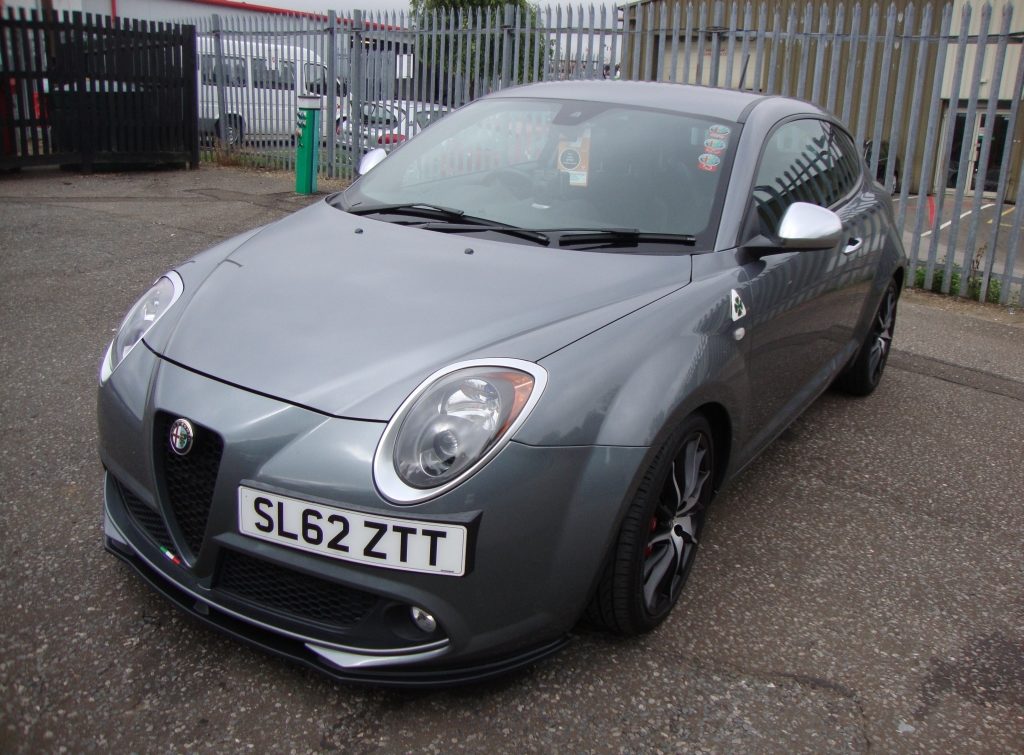 Next on the list of things to have a look at were the pits where the F1 cars were being prepped for their afternoon of racing. We were allowed in and got right up and personal with the cars, drivers and mechanics. One that caught our eye was the Benson and Hedges Jordan seen below complete with Eddie Jordan’s signature. I also found a picture of this car from a publicity shoot in Regent Street London in 2004. The car had really not changed that much to the present day and the drivers and mechanics were more than happy to talk about the cars and the day’s racing at the circuit. Myself and Jeff watched their progress from the pits albeit with my fingers in my ears. They were LOUD! 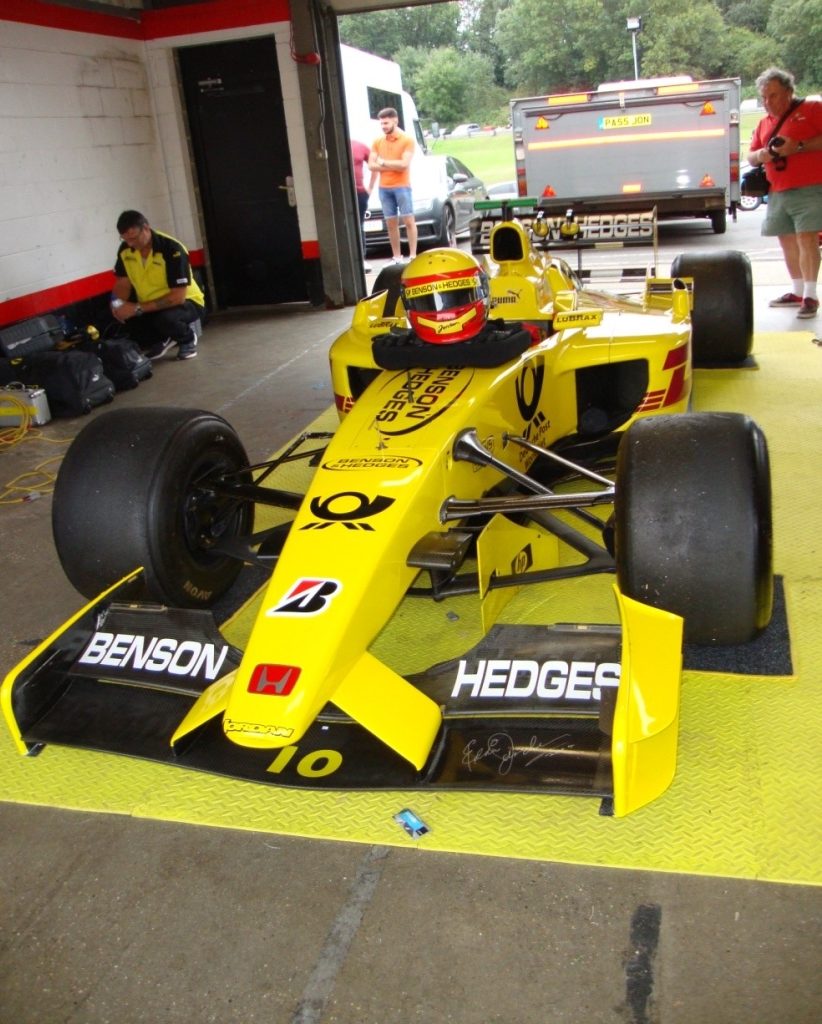 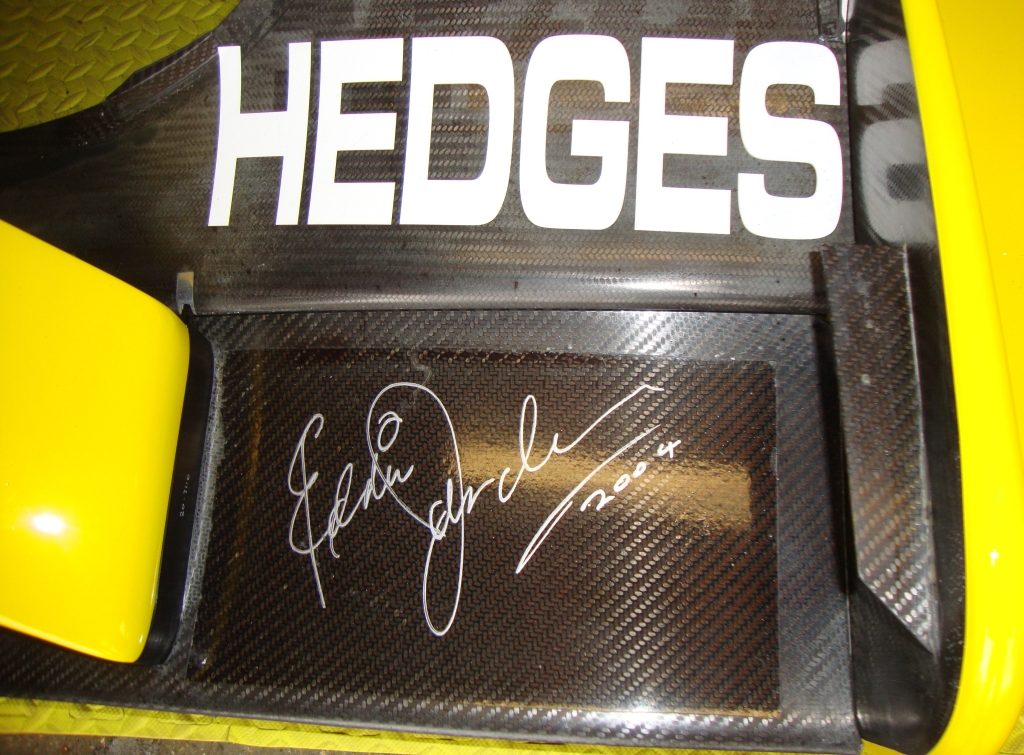 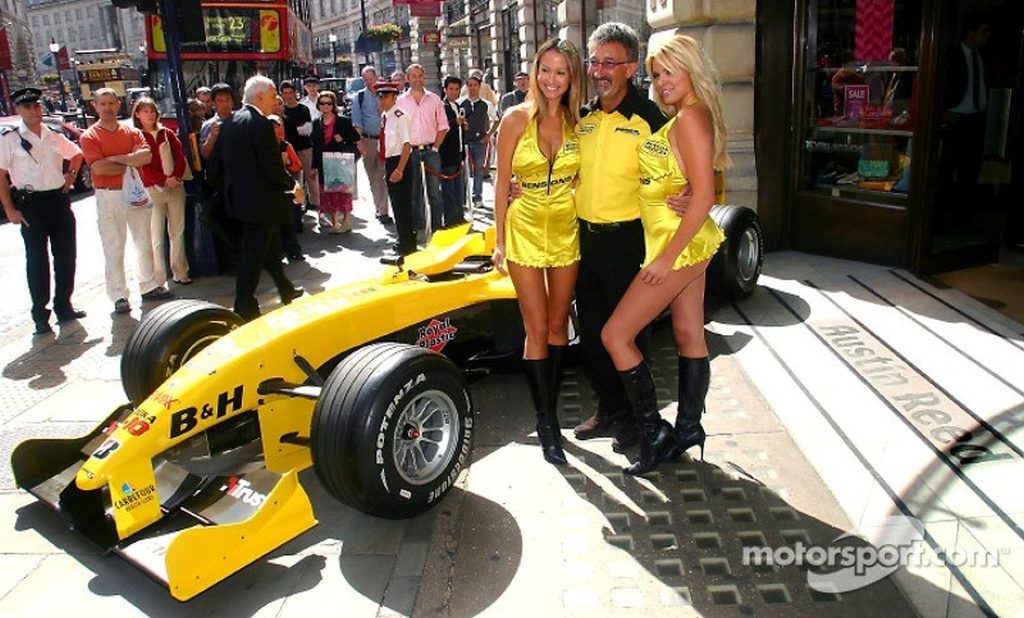 Jeff then pointed out a car that was once the prized possession of a certain David Coulthard and it did look rather expensive and probably worth more than my own house. This car is now, incidentally, owned by George Fowler. 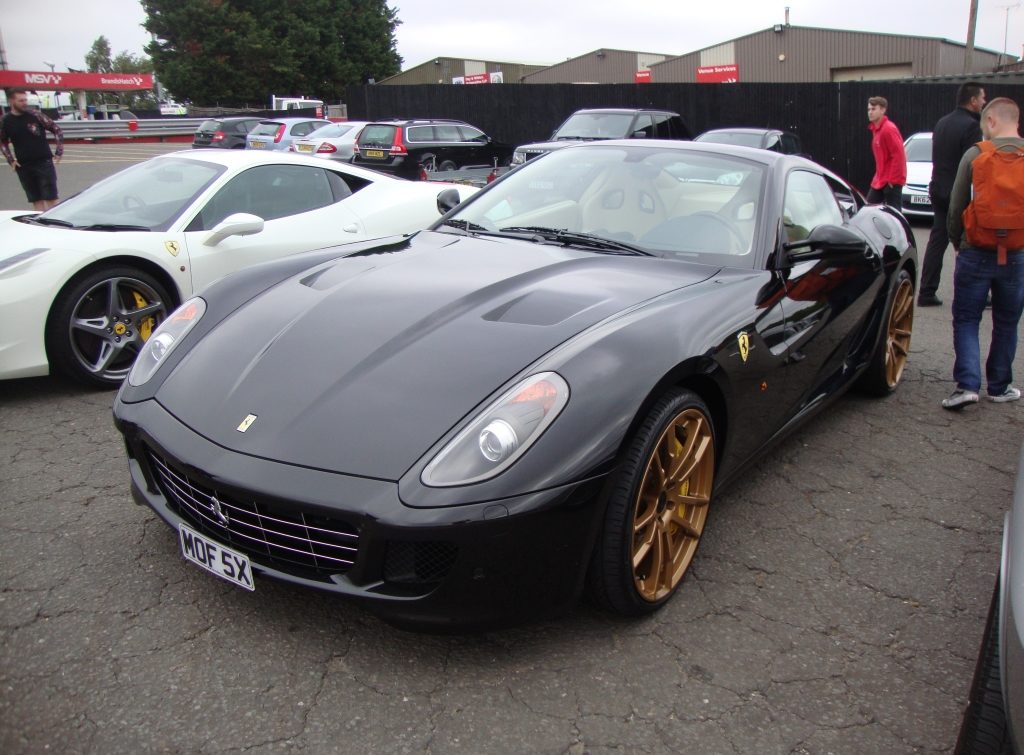 On the way back to our display stand, Mr Kaby, who I have never known to be emotional, pointed out a car that he also used to own. It was the very same 155 that he had sold to buy his Spyder. His body language suggested at a certain amount of regret for selling it and I am sworn to secrecy on how he felt about it’s current condition compared to when he owned it. If he could have put his arms round it and cuddled it, I think he would have done and the picture says it all. We did loiter around for the current owner but I think he was hiding in the fear that one of us would be parking an extra Alfa round at Jeff’s house that evening.

Then we realised how time was getting on and went to join the others to watch the last four or five races. Pictured here, they are from left to right. The, “big fella,” John Third with Phil Davies, John Dray with his big lens, Roger & Pam Smith and Graham Duplock. Graham does like a nice ice cream and I have had many a conversation with him with his face stuffed with a 99. 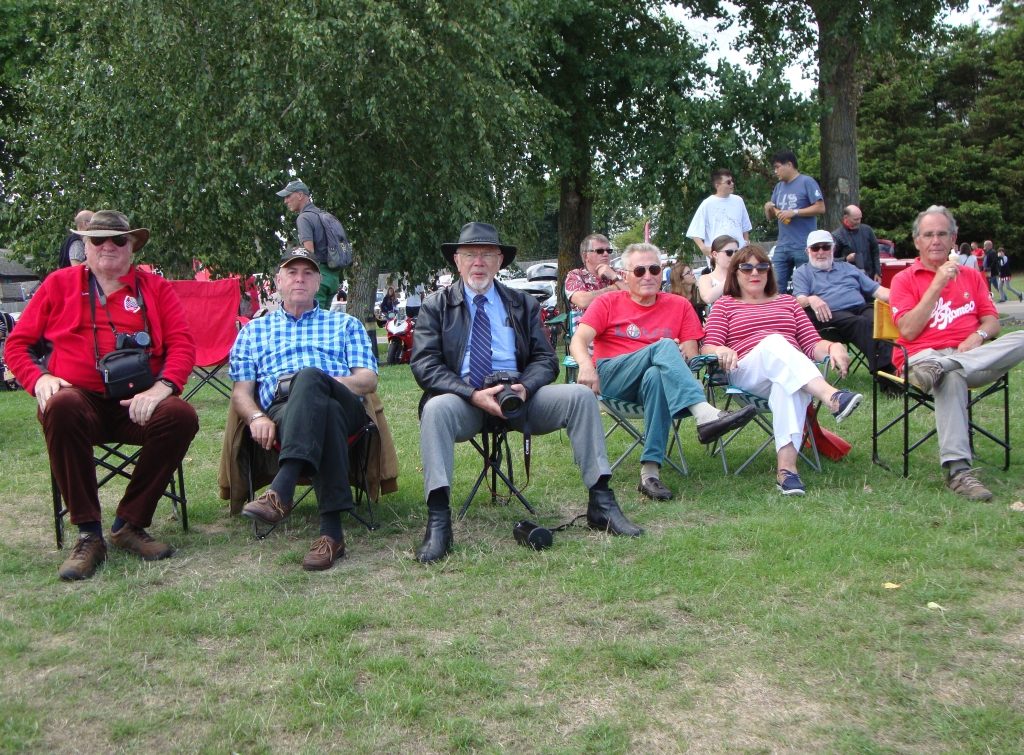 By now it had turned into a glorious end of the day and at five o’clock a bottle or two of Theakston’s Old Peculiar had beconned me home. This was one of the better Festival Italias and it comes highly recommended. Personally, I really enjoyed myself as I have never been that close to an F1 car. It was a childhood dream really only having ever seen them on the T.V.