Well having written up the Quex recce back in May for the preparation of this event, I thought I had better act on my own advice and attend the Classic Music and Motors Event. I was ever watchful of the weather having spent Friday on my front wheels and Saturday shinning up the car, both inside and out. My wife, AKA the CEO, daughter and granddaughter, based on this report wanted to go. They would travel down mid morning and join me for a picnic under the Gazebo for lunch. How perfect could that be? Then we could spend all day together, take in the cars, watch the Punch and Judy show, the 30 foot T.V showing Herby and the Italian Job, the formal gardens, crazy golf, ice cream parlour, museum, garden centre, craft workshops and the stately home itself. Everything was planned to the inch.

That was the plan and true to form if things can go wrong, it will. I had missed one vital flaw in this otherwise perfect family day out. The family travelled down separately to me, parked up for free at the Park, only to be confronted at the public entrance to the car show with a £5 per person entry fee. I had totally forgotten to check this as we are so used to free entry at the seafront shows. Quex Park, although a great family day out, has ever an eye for making a profit on the vast estate and this aspect of the show was not advertised till last minute. Quex must have made a fortune as the event was packed! The CEO, ever realistic, quite rightly said over the mobile, “If you think I am paying £15 to eat my sandwiches next to your car you have got another thing coming, I can do that at home for free!” Yes she did have a very valid point and one cannot argue against logic. I agree with her! Yet again my lack of planning is another hurdle to get partners, kids and younger people involved in AROCKES. There is a moral to this, do you’re planning and take everyone in the Alfa. Then there is no additional cost. Luckily I was able to eat lunch with them and the three year old enjoyed the very simple pleasure of rolling down a steep bank in the gardens, playing hide and seek and generally wearing everybody out. She had a good day even if she didn’t get to sit in “Gran Da’s” car or get to sit in a very fine surprise arrival that appeared later on. But, teasingly, more of that later…

The sun was threatening to break through but the North wind off the Thames estuary was cooling things down a tad. The gazebo went up (what a solid investment that piece of equipment was). Seven of our members attended. John Third, our Chair Person, arrived in the ever popular and attention grabbing 4C. What a fantastic number plate it has “J3 RDS” and what a fantastic present from his family. Craig Archer, Colin Craven, Jeff Kaby and Richard D’Criuse attended in their respective spiders and Richard was accompanied by his partner which made the club attendance fantastic. I was in my little MiTo and to make a fantastic surprise the legend, Jon Dooley, attended in a Giulietta TI that I believe was dated around 1961. I would really love to hear from people to tell me more about this model. This was a lovely machine in fantastic condition, with an engine bay you could eat your dinner off and a 1300 twin cam engine. He did let slip it had been rallied in the distant past, but you would never know to look at it. He denied all knowledge of owning it but I had a very sneaky suspicion that this was not true. In fact, I do believe he is hiding it from his partner in storage somewhere! This vehicle had the widest fluted drum bakes I have ever seen, they must have been 2 ½ “wide. It was an absolute pleasure to listen to his deeds of, “daring do,” incredible racing past and quite honestly I would have paid to listen to his stories. 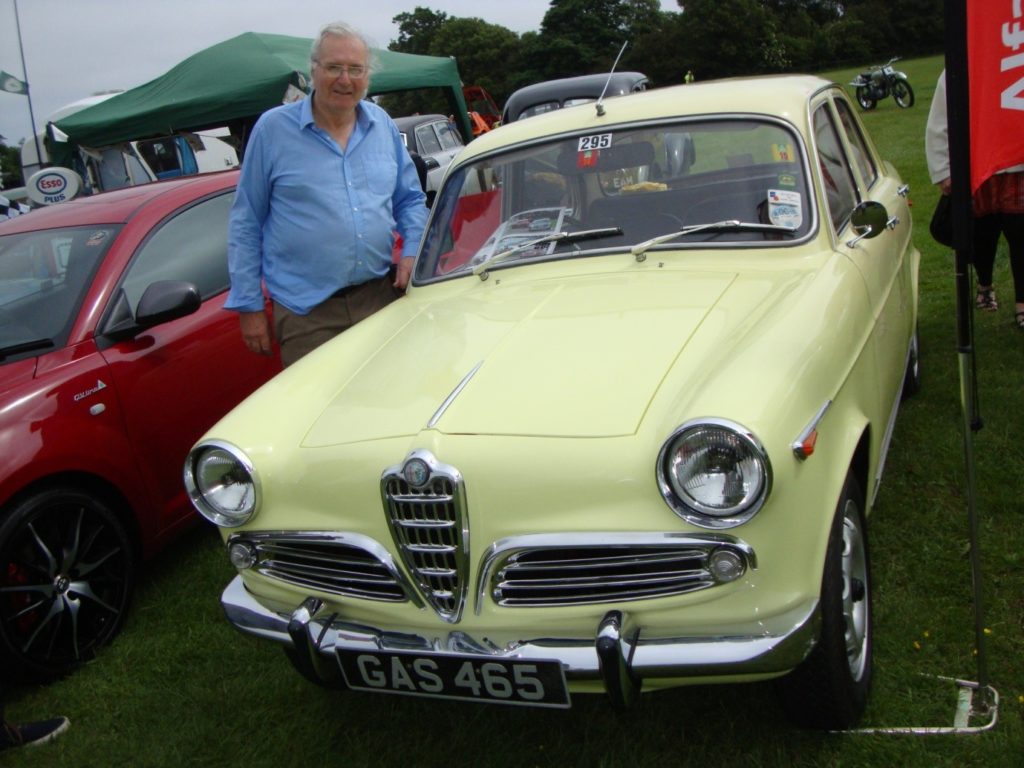 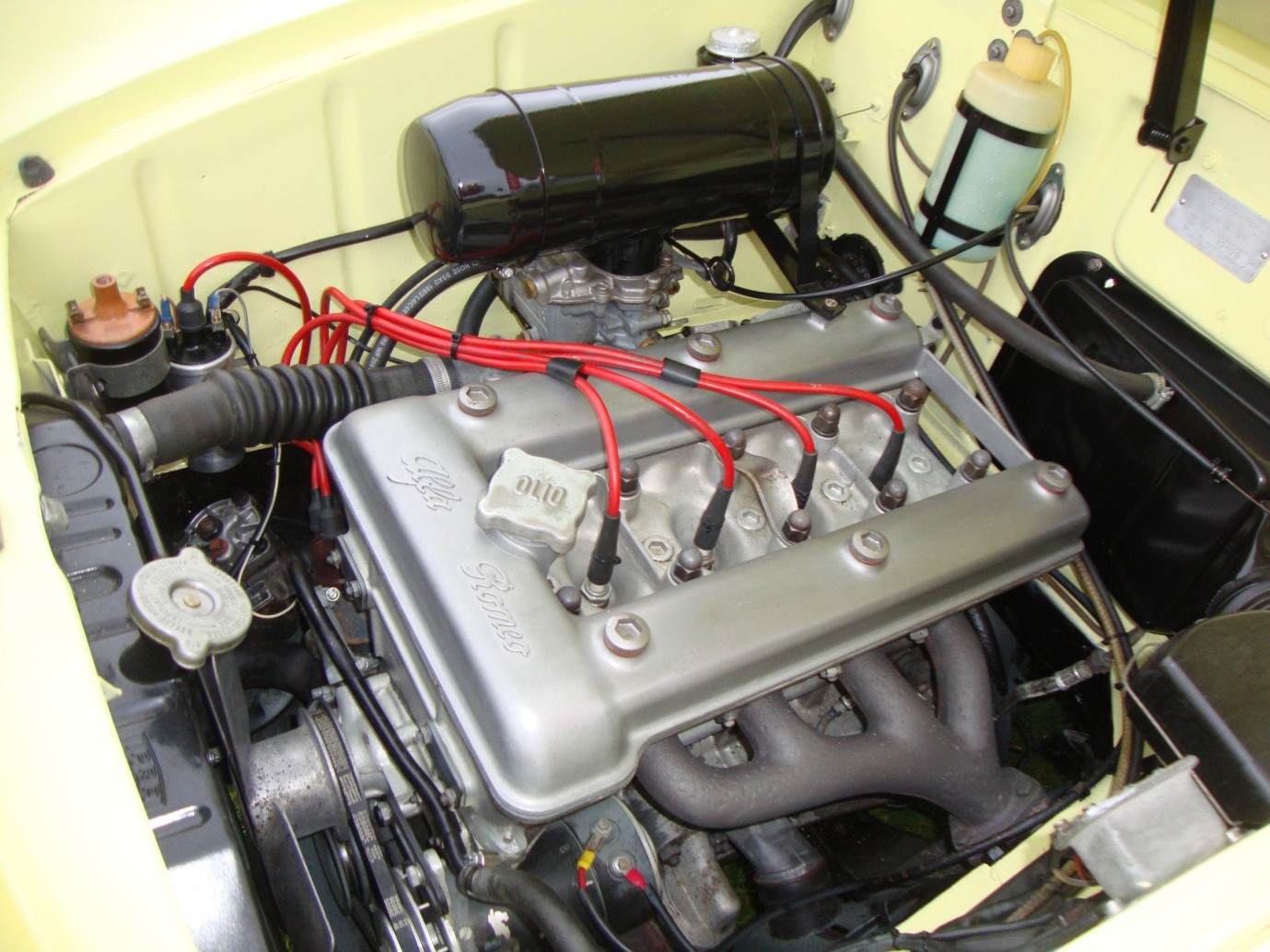 Having attended the Secretaries meeting this year, I was well aware that Jon was digitising the entire AROC magazine back catalogue with a target completion date of 2020. Some of these volumes are literally priceless! The digitised archive is going to be searchable and available to all AROC members. Jon also revealed that he has a vast archive of microfiches relating to historic Alfa part numbers and schematics. I am painfully aware how hard it is to get part numbers for modern Alfas without being a bit “fly” or even an expert. So this would be a fantastic aid to keeping some of the historic Alfa master pieces on the road.

That said, Jon is having a bit of a “mare” sourcing equipment to digitise this vast priceless archive that really should never be lost. If any of you can assist, please contact us on the AROCKES web site.

It is very much on the cards that Jon will give a presentation at one of our club meets but we do need to source and borrow a digital projector to connect to a laptop. Again, if anyone can lend one for the presentation (yes I let it out, it is more than likely going to happen) it would be an incredible help! The Moat PH, meeting room is more than perfect for this. Those that attended the 2018 AGM, I’m sure will agree. As far as I can research, Jon last gave a lecture to the West Sussex section in 2016.

Meanwhile, Craig Archer and Colin Craven were comparing observational notes on each of their Spiders.

The 4c as anticipated was, as ever popular and deservedly so. Jon’s vehicle was attracting oodles of interested people. I think he spent more time standing up and explaining it than sitting down. Those of you that know him must know that was quite physically painful for him. Then Craig Archer found an 8” length of hair in his spicy chicken and beans bought from the Reggie Reggie street food stand and proved he was, “well ‘ard,” by actually eating the rest of the meal. I think I will stick to the bacon butty and fresh ground coffee stall – a stalwart of car shows. 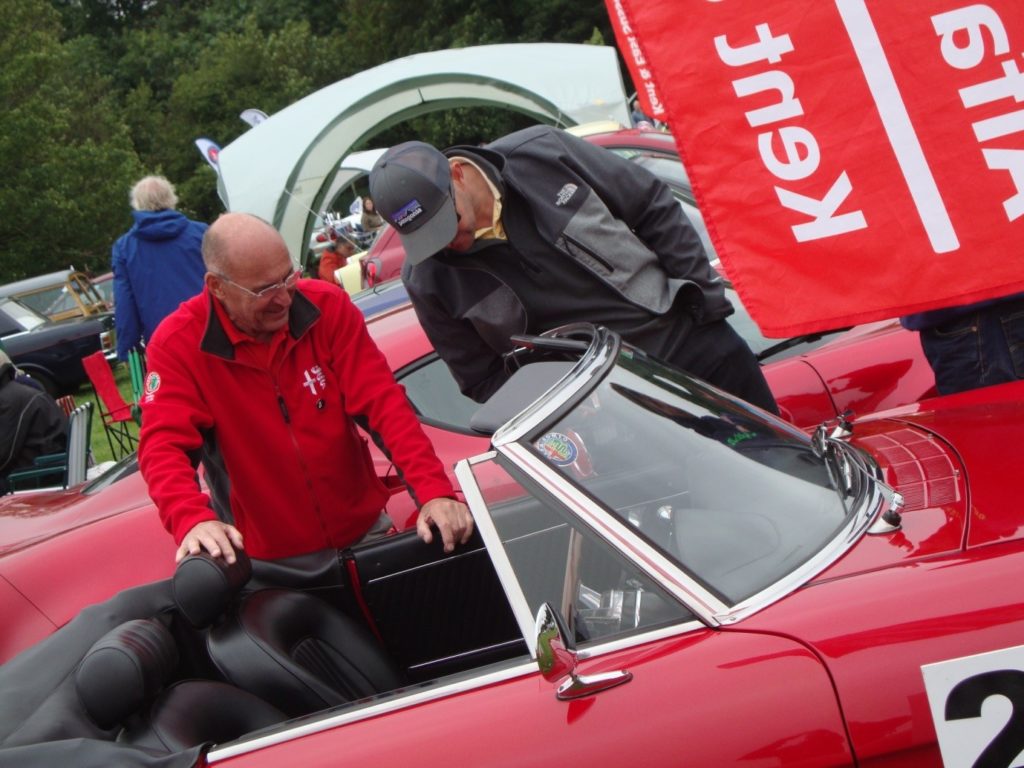 All too quickly 3pm arrived and cars started to drift away from other show stands. It always surprises me how little time I get to look at cars as it all gets surpassed by the many conversations I get into and the wealth of knowledge I pick up as a result.  I also have to thank Craig Archer for some of this for his insight into the 1750 engine. By 4pm Jeff Kaby called time on the gazebo and as soon as the first pegs came up the weather turned perfect and sun soaked.

At this moment Jon Dooley’s can of coke exploded inside the Giulietta and was causing much waxing of lyrical profanity as to the quality of far Eastern aluminium fabrication. Luckily I had a whole roll of loo roll and he was able to mop out his Alfa. The last of us, Jon, Jeff and the person I strongly suspect of selling the Giulietta to Mr Dooley, a certain person who chivalry dictates I can only call him “Tim”, had a last conversation involving a certain George Best…

Arriving home I was relieved to find I had escaped not having to hoover leaves out of my car again!  My wife had bought some lovely plants from the garden centre, at Quex, and I am really looking forward to seeing them flower and prosper over the summer. What a good day out!!