Well, where do you start with the Rye Show? To be honest you could start anywhere and it would still be fantastic! There was no such thing as a classic car show when I was little, but what we did have was a village fete and all things country were represented. We even had pig racing and a ferret display. The local hunt would turn up, usually because they were chasing a fox and were treated to sherry because nobody realised they were not actually part of the proceedings. In my day there was usually a vicar who was just as scary as a modern day clown from a Stephen King novel and prizes for the most engorged marrow. That’s why I suppose village fetes used to be held late in the year so that the season’s most prized vegetables could be judged alongside Jams, scones and the last of the season’s runner beans.

That said times move on, Rye still has jam on sale, the current fayre is pizza, bacon rolls, burgers, a Pym’s tent, bar and all the country pursuit stalls that you could throw a home grown prized onion at and then some. Rye is just about as close to what an old fashioned fete was, combined with a classic car show. Albeit last year the local Hunt was supposed to be there and sadly this year they did not appear. There was no pig racing but the ferrets … yes they were there as well. We did have the treat in the guise of the local regiment, The “Tigers” Princess of Wales Royal regiment’s Parachute Display Team who dropped in from 4,000 feet and that more than made up for the lack of a vicar, Local Hunt or any clowns but in any case, jumping out of a perfectly serviceable aeroplane looked just as scary!

All the usual suspects took their Alfas and exhibited, but more of them later, what really made my day was a new lady member exhibiting and a lady with an Alfa that we had not seen for about 18 months. Both had interesting stories and vehicles. I’d really like to make a fuss of them because a new member is what keeps the club alive and kicking.

First of all let me introduce Di Vickery, who has only just joined the club a week ago and took delivery of her 2 litre, I think a series 3, Kamm Tail Spyder in Le Mons blue only a few days ago from Paul Noon at Mortimer Prestige Motors. 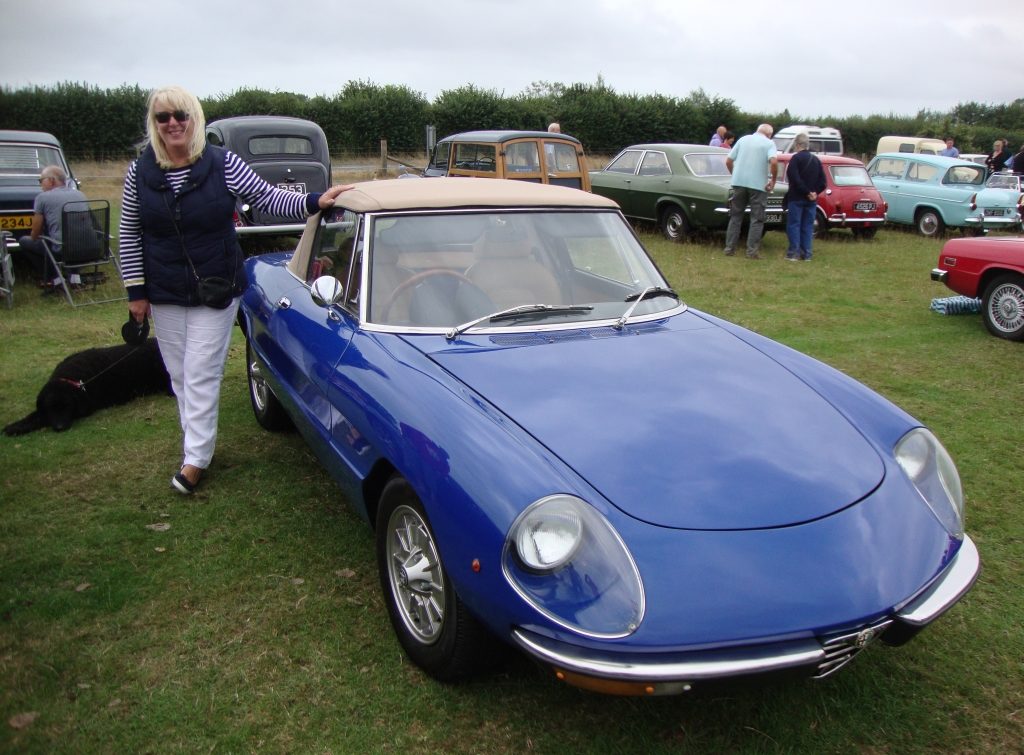 I can remember seeing Di approaching the show from the opposite direction to me and seeing her pet dog very comfortably “Lording” over proceedings from the rear seat. I don’t know about you but a pet dog in a Spyder with the top down just does it even for the most stone hearted of individuals and makes the heart melt. I have to apologise to Di as I completely forgot to ask her dog’s name because it was so adorable and calm.

Now I am no aficionado, or anything close to that of anything Spyder, Kamm tail 1750 or otherwise but this car just did it for me. The wheels were different and suited it perfectly. They were Cromodora and are highly sought after. Di informed me that they had bought a spare in the same livery for £80 on E-bay, so had the full set and an excellent bargain price. It was not a make I was familiar with but assuredly were quite rare. The only history to the car was that it originated in Manchester and to me the centre console looked different and unique. I still haven’t got my head round why some pedals “hang” and other stick up from the floor. The hood was a “refurb” and Roger Smith gave some very enlightening knowledge into the technical specifications. Roger as you know owns a very similar vehicle that he has owned for the past thirty years. To me the hood and body colour combination was a perfect match on a very beautiful car and I have to admit the engine bay looked rather nice too. In short even to a complete novice like me this was a very nice car and I hope that we will see a lot more of Di Vickery, her Spyder and the doggy who I really must ask the name of next time. I have to admit that Di was right to say that she had fallen in love with the car. And we hope to see a lot more of her vehicle in the future. 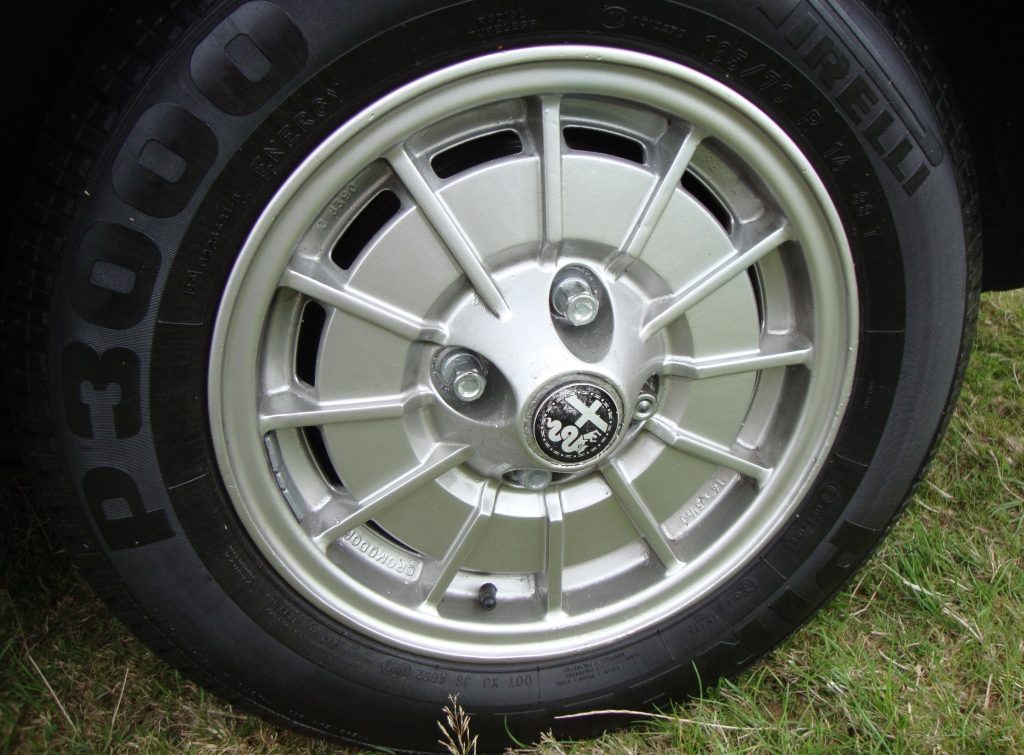 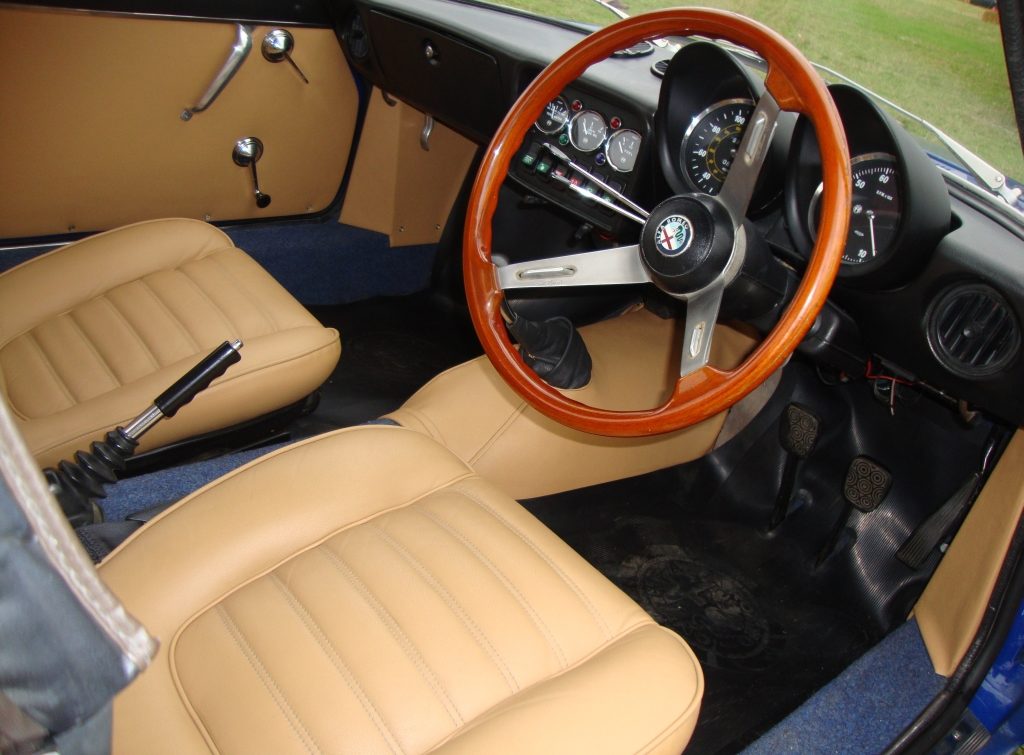 It’s now that I should introduce Hilary Richards who also attended in her 916 Blue Spyder. This is a vehicle I must confess I have not seen before and I had a right good chat about the history of this Alfa and I was transfixed! 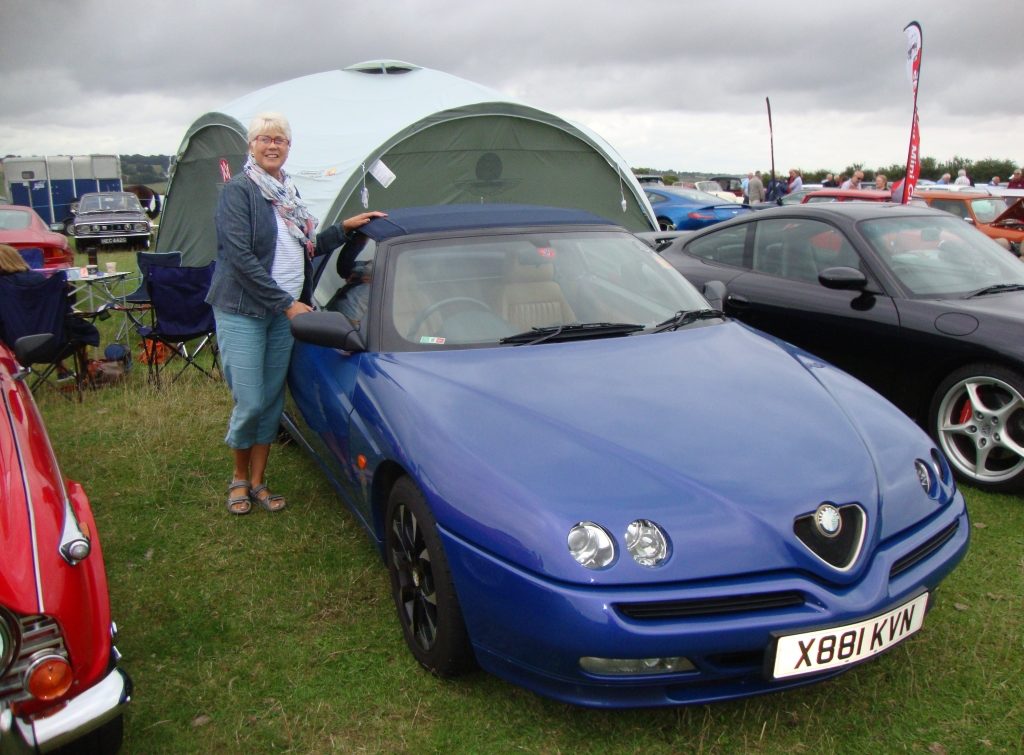 Hilary has been a member for the last 18 months and because the family live in Eastbourne have not attended many of the shows around Kent. This is another reason why I feel we should visit this area of the South East for shows as everyone that loves driving an Alfa round a good B-road bend knows that getting across from Kent to East Sussex takes an age, if not longer and we should visit there more as a lot of our members live in that area. I think the seafront show at Eastbourne really beckons in this respect.

Anyway, to cut to the chase this vehicle was apparently owned by the actress Susan George, who is now a film producer and Arabian horse breeder. Susan George is perhaps best known in the films Straw Dogs with Dustin Hoffman and Dirty Mary, Crazy Larry with Peter Fonda. Hilary also informed me that this was a very confusing car. She did not know whether it was a QV or not as although it had a clover leaf on the rear, there was not one the front wings as one would expect. It had the Pininfarina and “F” badges on the rear quarters denoting it was one of the 916’s made in the  Pininfarina factory and not the Alfa one. And these badges certainly looked original. The Cloverleak on the back probably being a previous owners “add-on.” Our secretary was not aware of a QV 916 Spyder made for the U.K market and my knowledge of what was made for the Italian market is rather minimal and in any case was a right hand drive. 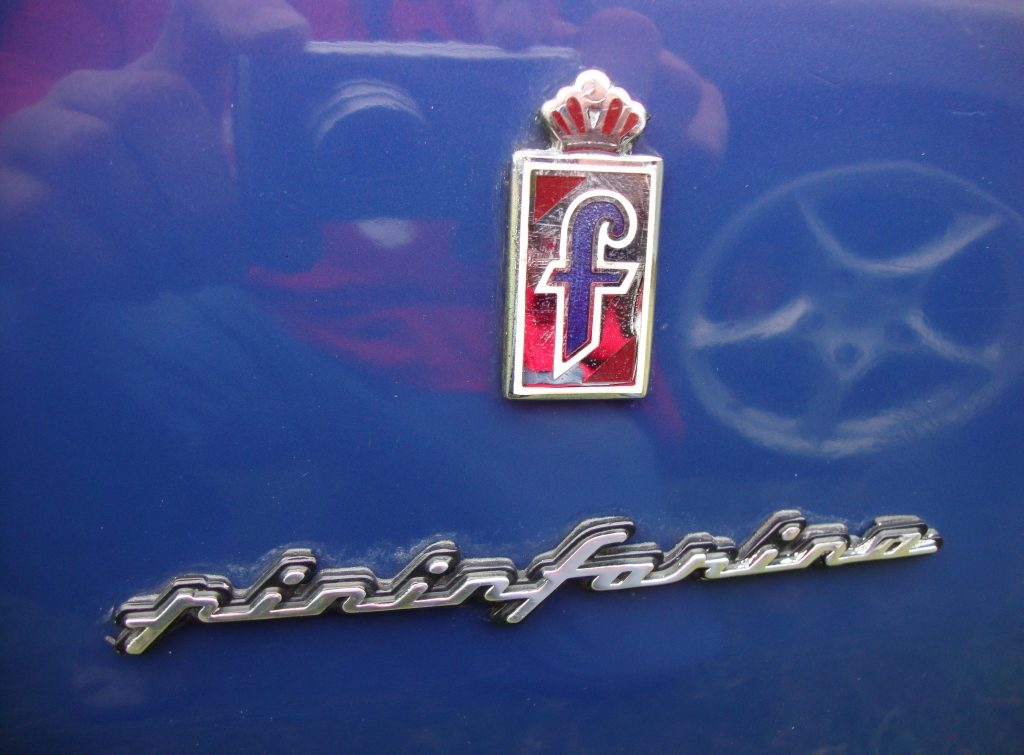 Hilary further revealed that the exhaust pipes were really big in terms of diameter but concealed inside were some much narrower pipes that looked pretty standard. Both Hilary and her husband had elected to replace these with the standard pipes. I have to admit I was scratching my head, but Hilary summed it up when she confessed that, “I just love this car!” At the end of the day that’s all that matters and Both Hilary and myself would love to hear your opinions as there are so many more knowledgeable people out there that could fill in the gaps. Three that come to mind are our secretary Jeff Kaby, a certain Steve Geary and the ever sublime David Norman. Incidentally Steve Geary has not yet sold his 916 Spyder, of similar spec and has dropped the price. When Hilary meets up with them in the future I am sure a few gaps will be filled.

Whilst I was meeting people that I had not met before I happened to notice old friends doing what they always do at car shows, discussing life, cars, ailments of age and anything else that blokes talk about and so I just had to grab a quick snap of Roger Smith, Graham Duplock and Colin Craven doing just that. Although, I have to confess, I’m usually completely lost by their knowledge and conversation when I can actually hear what they are talking about and saying. Roger, as always, is a tonic for the blues and I could listen to him all day long. 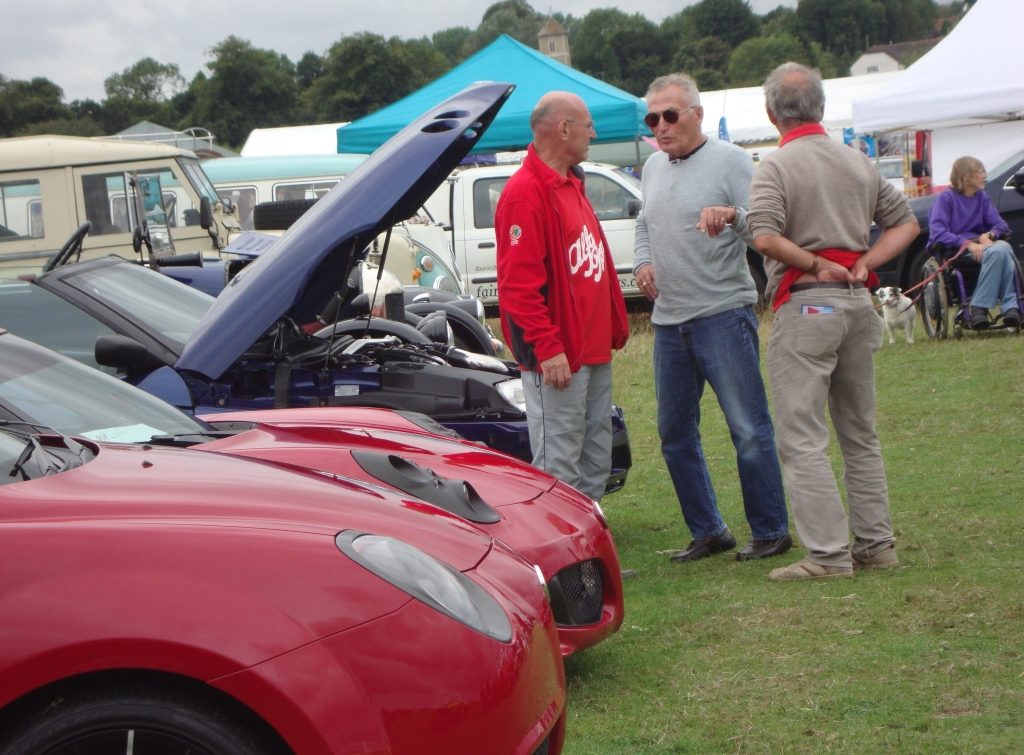 At these sort of shows you just have to have a nose and a wander around everything else and one thing that caught my eye was a fire engine, but after speaking to the crew I learned that this was the very same fire tender and crew that had put out the fire at St Michael’s Hospice three years ago. The hospice were the organisers of the show and had invited the tender and crew to the show as a thank you. The kids were climbing all over it and it was lovely to see. 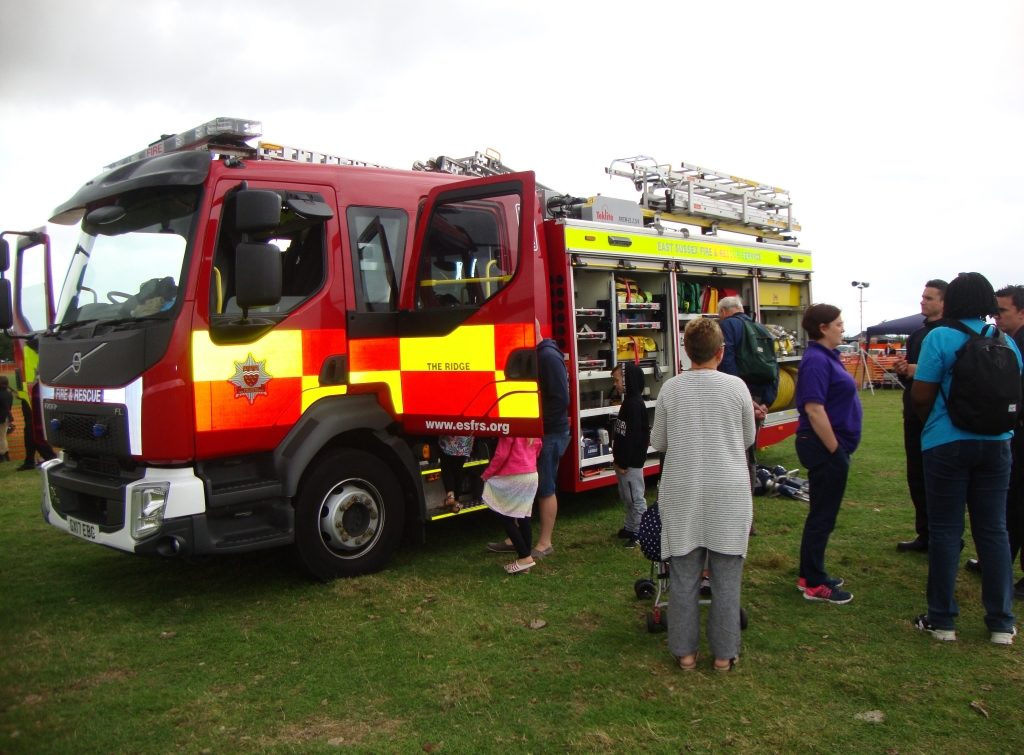 Country shows are never complete without a bit of show jumping and I thought the junior display was fantastic. It reminded me of the author Thelwell and his book of cartoons entitled, “A leg at each corner,” which just summed up country fetes and the skills associated with people making their living in the country. 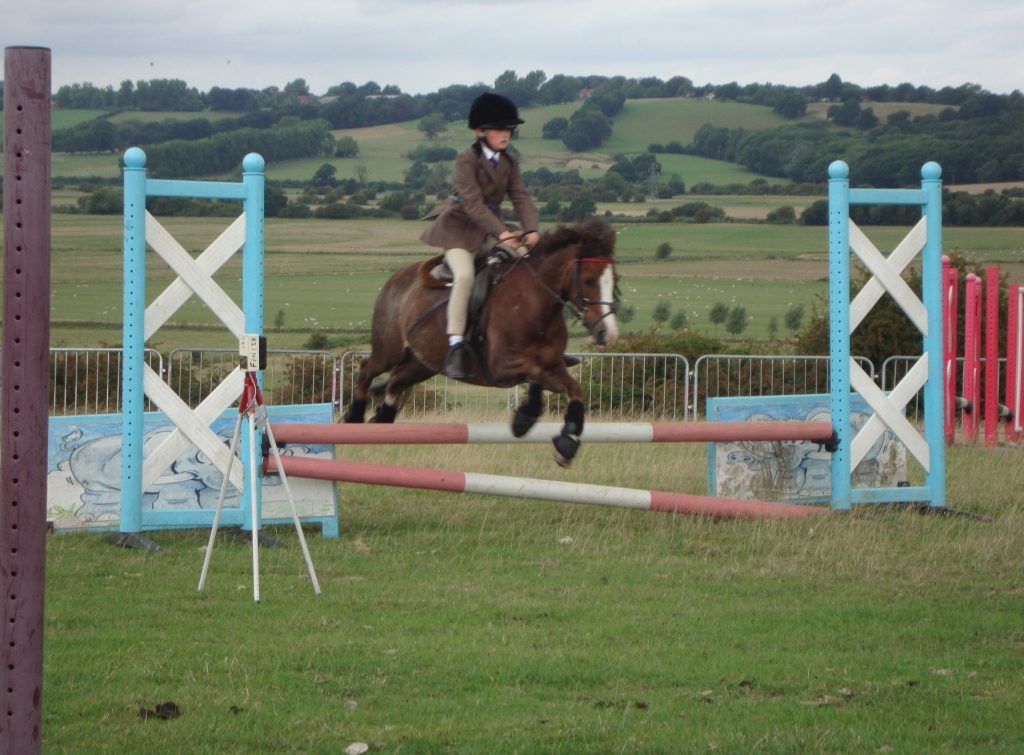 Purely by chance there was a marching band consisting of Army veterans and as a child I always enjoyed the thumping of the big base drum onto my chest as they marched past and this was just the same. My boots, in the Army, were never that shiny though! 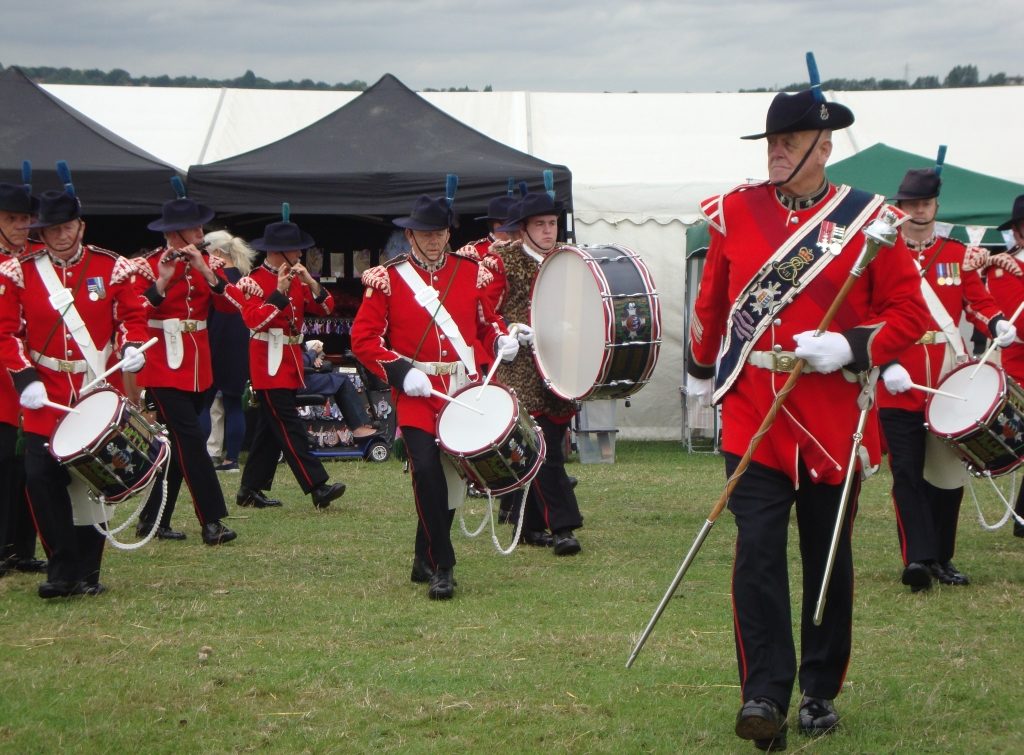 The climax of the day was the parachute display team from our local regiment, “The Tigers,” or as Military types knows them, “The Princess of Wales Royal Regiment.” The cloud was low at 4,000 feet so freefall chutes had to be deployed as soon as they left the aircraft. This really made it all the more spectacular and enjoyable.

So another car show came to an end and I have to say that I am surprised, when our club has over 200 members that we don’t see more people like Hilary, Di and their fantastic vehicles more. We should visit E.Sussex more often, we should do more shows and events in that direction and we definitely should go to Rye every year, if only to sample more of those fantastic roads bends and straights. You don’t often get to drive properly in the South East and I have to admit I was a bit “Italian” on the way home and that really made a good day perfect for me. 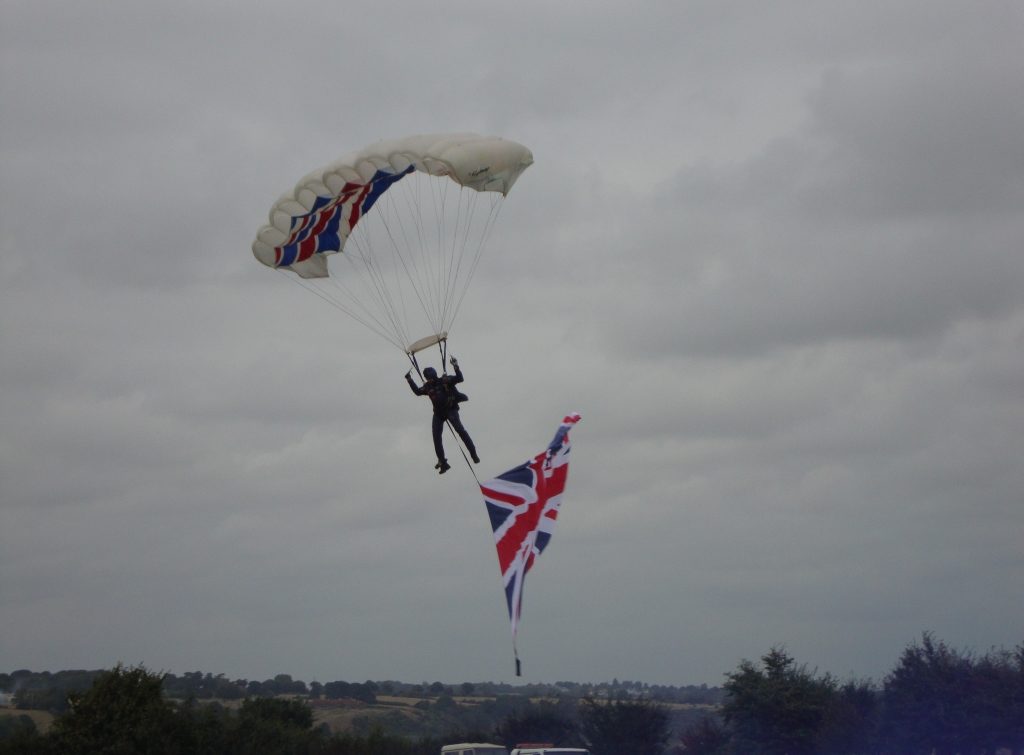