Well it is the end of the show season, more or less, with only a couple or three shows left of 2018 before the majority of the classic Alfas in the section either get SORN or tucked up in storage after the start(ish) of October. It’s always nice to squeeze in a few more events before the weather turns nasty. I personally really don’t like the Winter but tasks turn to more the administrative for the section. Jeff Kaby is actively working on that with ten pin bowling, quiz night, the post Crimble Dinner (rather expected to be at the Moat this year, which has a hotel) and the ever crucial Annual General Meeting, not to mention the monthly section meetings that keep everyone in touch and together as a section. Personally I have to get to grips with re-designing our letter headings and Jeff has tactfully reminded me several times through the year. There is the question of designing the Doug Hodson memorial trophy and planning events that will hopefully move further into Sussex in 2019 as a great many of our members live in that direction.

So to The Tenterden Lions annual event that last year saw around a 100 cars exhibited and this year nearly saw twice that.  Car shows are ever more becoming more frequent and popular. The weather always plays its part and the good forecast saw eight of our members on top of the four that exhibited last year. We had Amanda and Dave Norman ever sublime as always, Colin Craven and our secretary Jeff Kaby, John Dray, Tony Twyman, Craig Archer and Michael White, Corinne and their two grand children. Of course yours truly, that’s me, in the Mito. Importantly there was the essential stalls that were more than ever in evidence this year and the prize really had to go to the stall that put five rashers of bacon into my butty (twice for £3,50 each) so star ratings for them !!

Shame on me, I have never introduced myself to the Whites and on this event they brought their grand children in the Brera. So my ears were immediately pricked when the Brera got called to the ring to be judged. 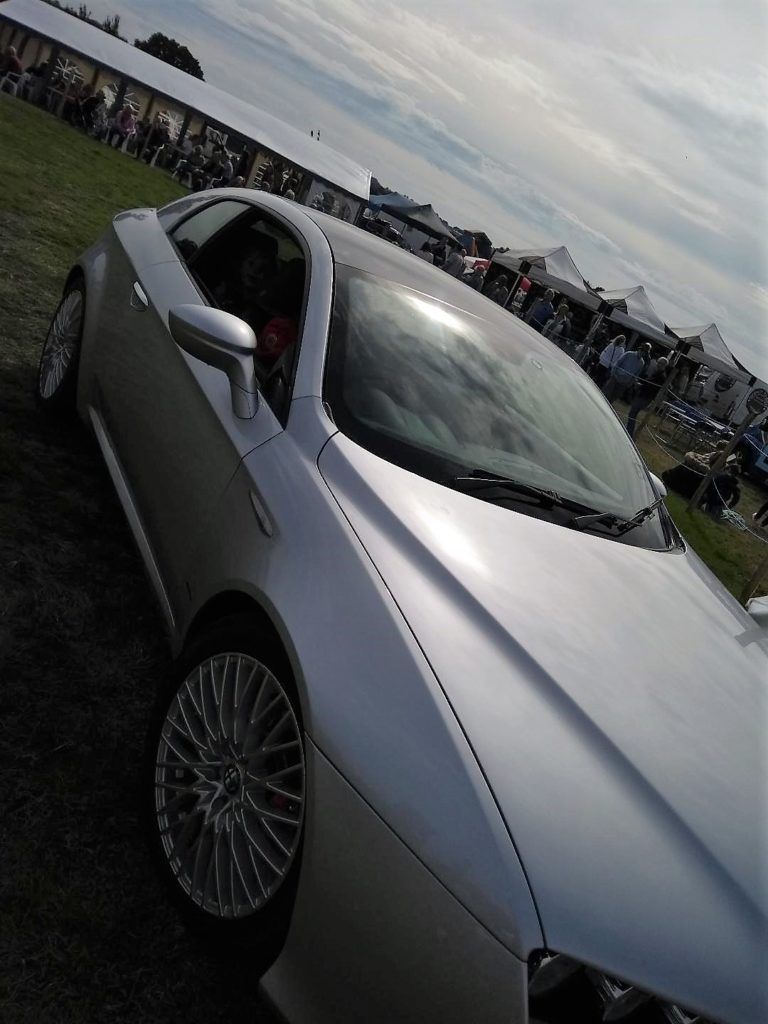 So I just had to have a chat and introduce myself. It transpires that they are the second owners of this car and have owned it for the last seven years. It’s is a 3.2 litre V6, it has 4 wheel drive (which means it corners like a train!) It has covered 93,000 miles and Michael told me that he has spent a fortune on it in the form of a new cam chain, an Autolusso wizard stainless exhaust, Kenwood stereo that has Facebook amongst other things. A more or less new sub frame with top of the range bushes, Eiebach springs and Monroe shocks. The car itself now sits about 30 mm lower. Originally Corinne was the catalyst for the purchase of the vehicle but Michael has fallen in love with it. Both he and Corinne remain avid pro-club fans and it was fantastic that they bought their grandchildren for a great day out and a picnic. 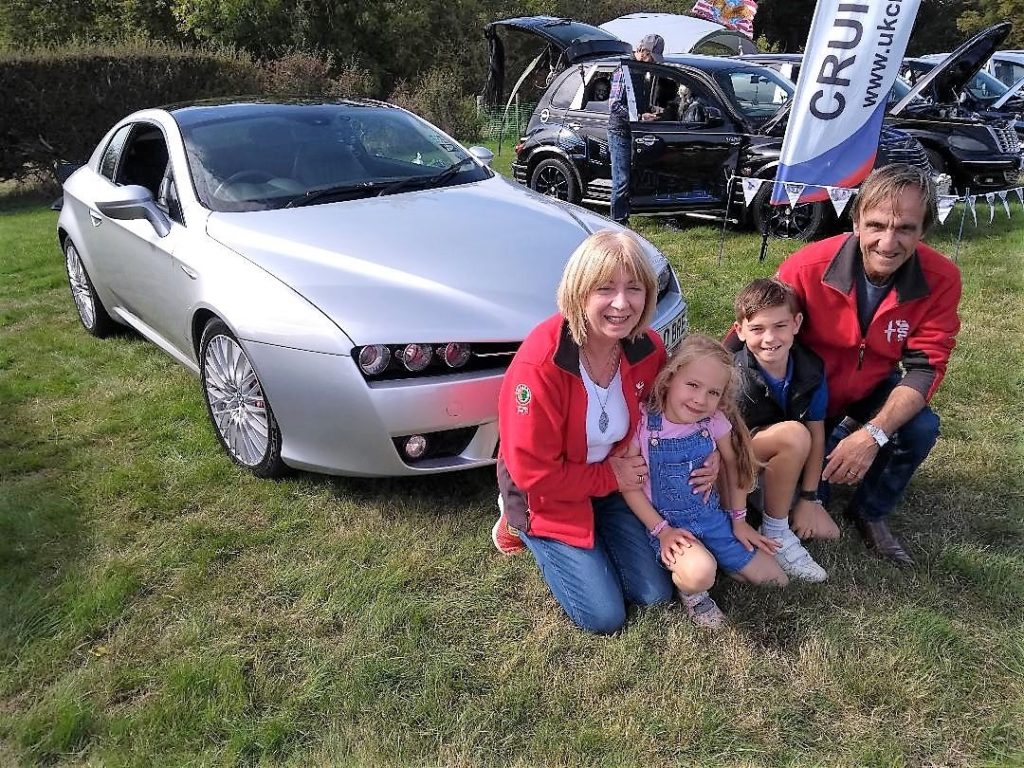 I should not forget everyone else attending and I give you Craig Archer sorting out deals on his mobile. 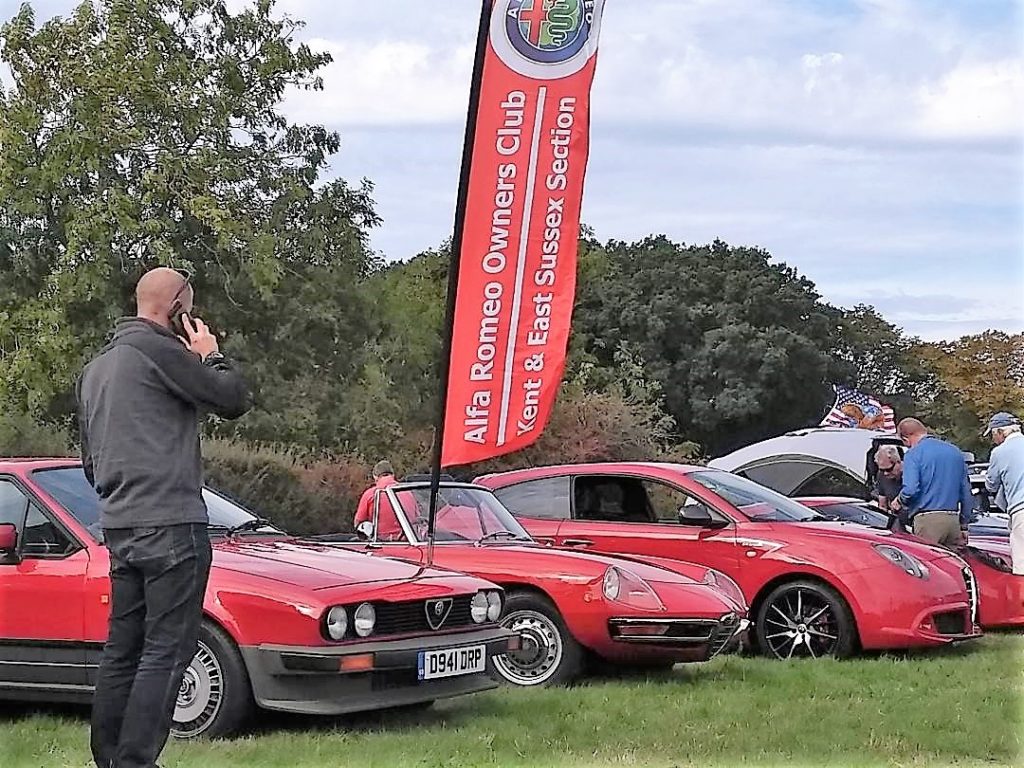 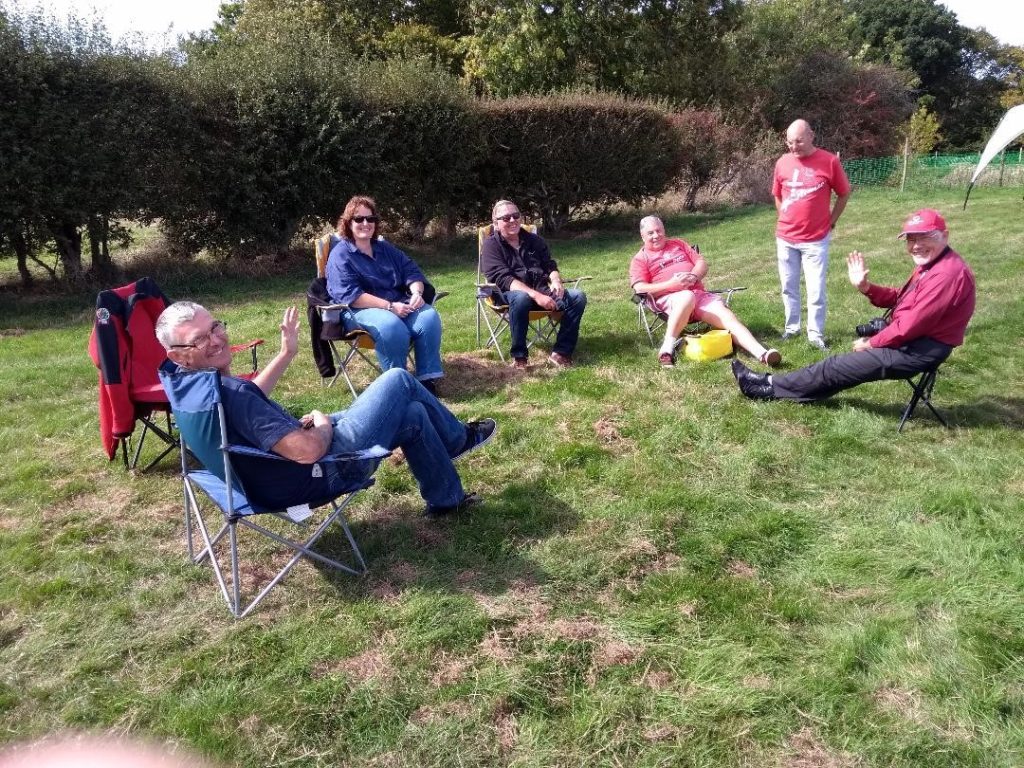 I obviously had to go for a nose around the show and one vehicle that caught my eye, if only for the overwhelming presence of chrome was this little wee beastie … 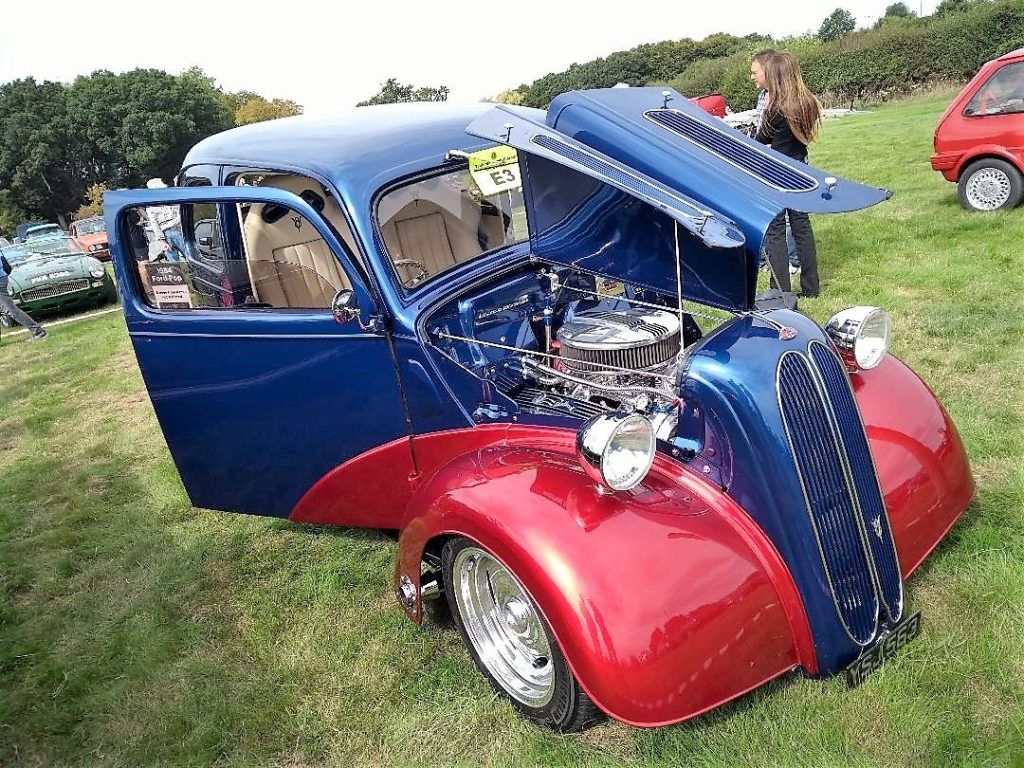 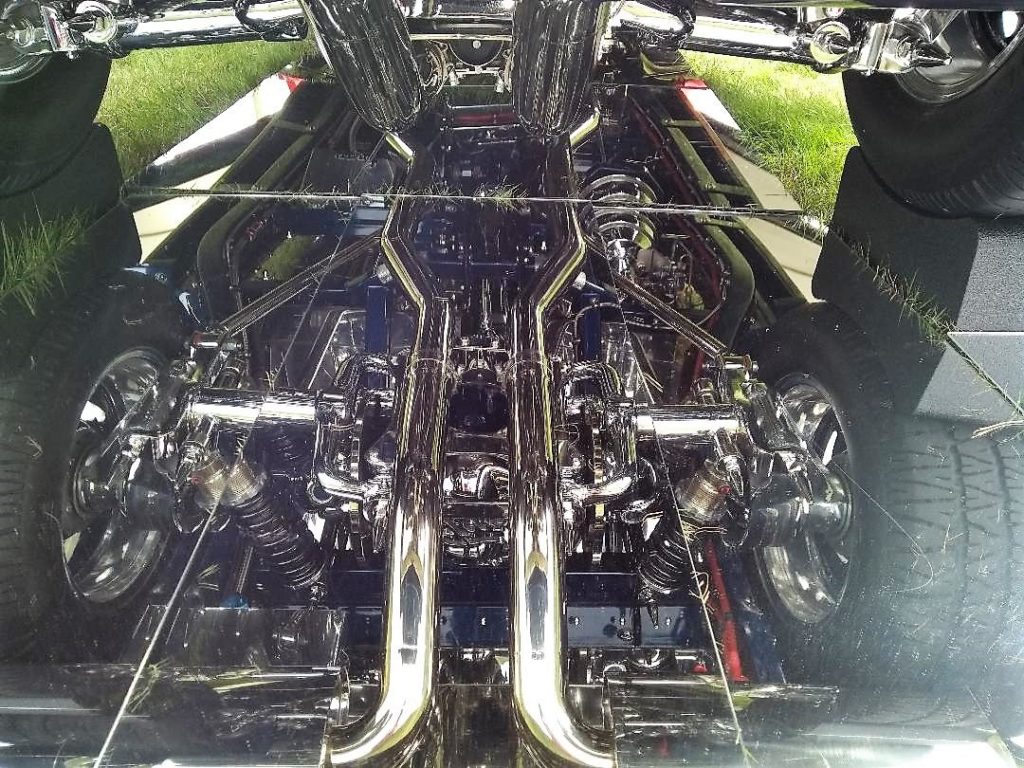 The chrome work in there must have cost a small mortgage !!

Later on in the afternoon we were joined by Steve Geary, who I am glad to say, has now sold his 916 Spider and quite unashamedly has spent the proceeds on Botox surgery. 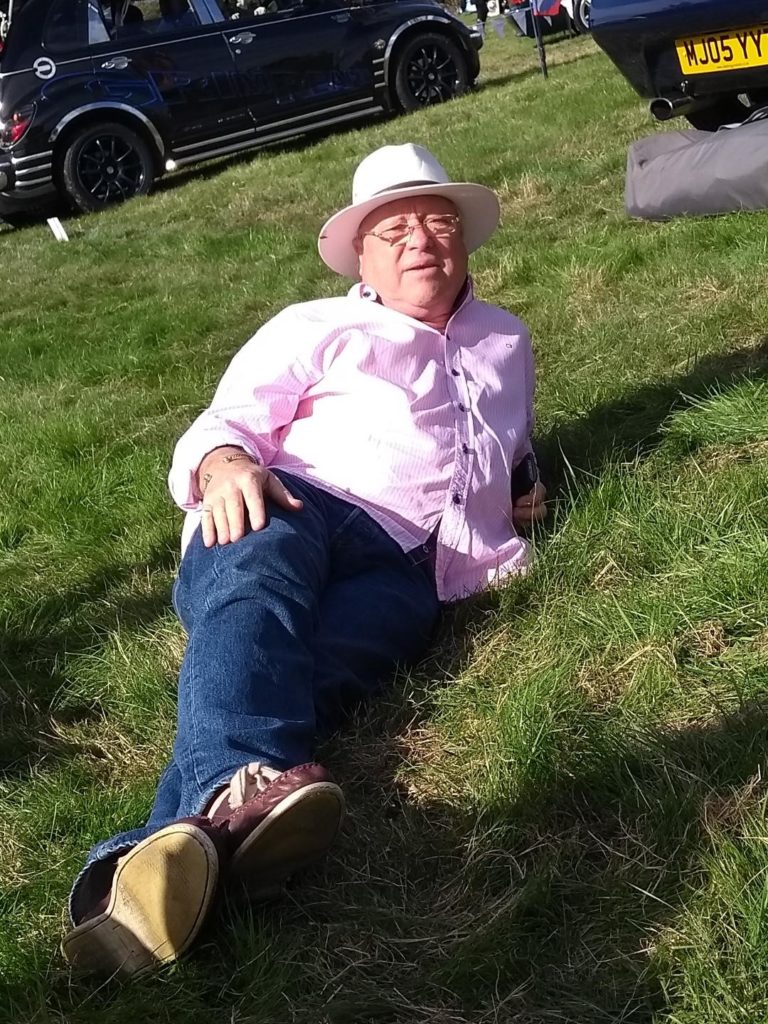 .. and jolly fine he looks for it too. I have to mention that Steve was quite happy for me to tell you this whilst he described the layout of the floating river boat palace that he has recently renovated and calls home. We did resist black balling him from the section as he was clutching his partner’s, Trudy’s, Alfa keys and fob and that saved him … I am sure he will be wheeling and dealing his way into another Alfa in the very near future. Suffice to say that you do not have to own an Alfa to be an AROC member.

At this moment, bearing in mind that Headcorn aerodrome was relatively just up the road we were treated to two flypasts of a WWII two seater Spitfire buzzing the show. Soon after it was the inevitable saying of goodbyes at about 4PM and we all went our separate ways. One memory I will take with me was the same Spitfire taking off and the pilot waving at me as it flew about 50 metres above and in front of me as it took off from Headcorn as I drove past on my way home.  What a glorious September Sunday !