The first event was a trip to the Oldtimer at Nürburgring from 8th to 14th August and for me this was somewhere new because, although I have been Alfa touring on the continent for the past ten years, with the exception of Bavaria and the Alpine regions, my trips have avoided large parts of Germany. The car designated for the trip was the trusty Alfetta GTV6 which is a wonderful machine to let loose on continental road surfaces.

The plan was to join Nick Clancy’s AROC tour at Bad Münstereifel but I managed to fit an extra day or two in by driving down to the Northern extremity of the Alsace region which is on the French border near Hagenau (where Sébastien Loeb comes from). It was a detour but this is one of those places where the wine is delightful and the vineyards spectacular. I stayed in the charming village of Schweigen-Rechtenback almost next door to an excellent wine cellar which has a constant stream of visitors. Two cases of wine were stashed into the back of the GTV6. 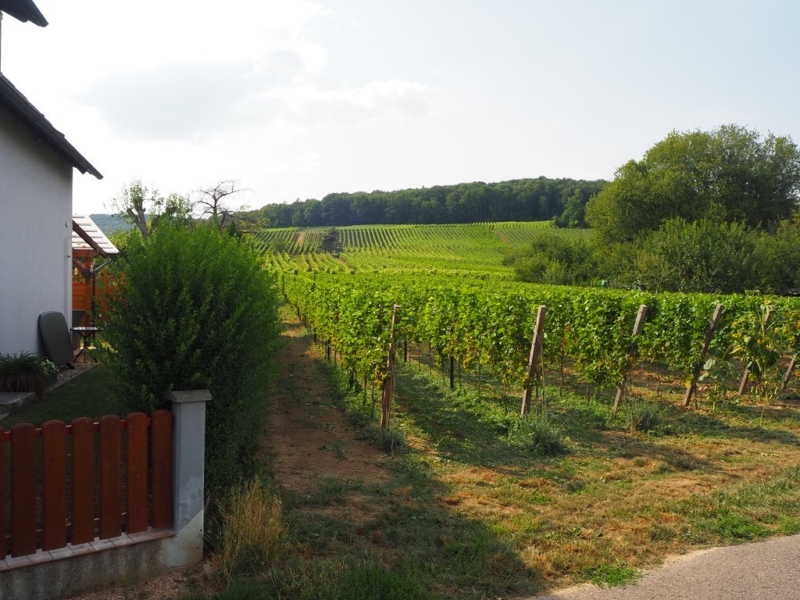 Vines in the German Alsace.

On the second day my plan was to travel North through the mountains to the Mosel Valley and then visit some castles. The last time I was in the Mosel region was fifty years ago and memories of old tell a story of bier and wild times. Now, older and perhaps wiser,  I appreciate the natural charm and beauty of the region, although I was constantly asking myself where all the campsites had come from. It seems that escaping to the great outdoors with hiking boots and short trousers is a very Germanic activity. I have the impression that John Bull has long ago spurned the image of khaki shorts and a knotted handkerchief, or at least I think he has. Mind you it was those Imperial khaki shorts which won those battles in the western desert in WWII but, as we are in Germany, I must not mention the war. 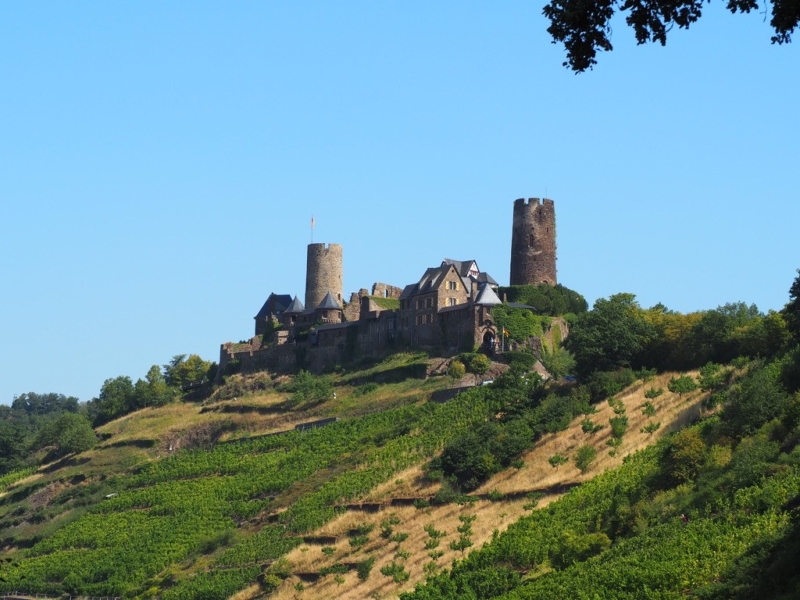 The castles at Burg Thurant and Cochem were crossed off the bucket list and then it was North to Bad Münstereifel, passing Nürburgring on the way. On the way downhill into a roundabout the GTV6 managed to lock a wheel under braking. I was travelling rather quickly but the real cause was the Tom Tom commentator (a young lady) who managed to pronounce Nürburgring in a way sounding very much like Newbuggering. That announcement caused hysterics and a momentary loss of control but, in the event, the trusty GTV6 slithered for ten metres or so while I remembered what to do and then was quickly snapped into and out of the roundabout, no damage done!

The roads in the Eifel mountains are very smooth and feature sweeping bends which all seem to have perfectly radii for positive driving. It is excellent fun, interrupted only by motor cyclists travelling at impossible speeds and the odd BMW or Audi with a teutonic salesman on a high speed mission to sell valves, machinery or maybe lederhosen. They go quite fast do these German reps.

After meeting Nick Clancy (at a roundabout on the outskirts of town) I was directed to the hotel and was confronted by the first obstacle of the tour. The carpark was inaccessible due to a ramp at the entrance which could not accommodate my Alfetta’s low exhaust. Bother, I thought! However, the Thai lady proprietress supervised our rearrangement of the furniture in the garden restaurant so that the car could be fitted in quite nicely as a sort of static “exhibit” to have evening cocktails by. As it turned out this was a perfect solution!

Nick and other assembled party members were all very much struck by the fact that Bad Münstereifel has in recent years transformed itself from a delightful old world regional town to a high powered upmarket retail outlet centre. Many of the shops have been bought by some successful Bonn banker or Dortmund industrialist and are rented to upmarket clothing, shoe and handbag retailers. This seems to work commercially but, sadly, whatever nightlife there once was has departed and there are only a few bars and restaurants. Even Nick’s favourite Brauhaus was closed for a summer holiday! Someone will need to explain why a hostelry in a rather attractive tourist town with several hotels closes for a summer holiday in August. It sounds more like a French thing that a German thing but, never mind, we Alfisti know how to survive in such adverse circumstances.

Nick, using his West Midlands diplomatic skills, managed to talk our Thai hotelier into getting out her cooking pot and preparing some genuine Thai food. This we enjoyed on the Saturday and the Sunday nights and it was superb. A veritable feast was created on both occasions from a very simple cooking hob in the hotel reception, though I think there was much preparation in the kitchen beforehand.

We went to the “ring” on Friday and collected our race tickets priced at a special rate for Club members. Our hosts were the Alfaclub of Germany and throughout the weekend their hospitality was superb. Friday afternoon found us visiting Cochem on the Mosel again for a very pleasant lunch and another visit to a wine cellar. One more case of wine was squeezed into the Alfetta at this stage.

Off to the circuit on Saturday and we joined the privileged Alfa Owners who had bought their tickets early on Friday and so were permitted to park inside the circuit. For me the place was heaven, just metres from the GTV6 were the classic racers of Scuderia del Portello and OKP Parts and Engineering. The Alfa Club marquee was nearby wherein, wearing an entrance tag, you could obtain wine, beer, soft drinks, coffee, sandwiches and cake, all without charge! It is probably worth repeating that … all without charge and incorporated as part of the entrance and parking ticket price of about EU48.

The numbers of racing cars, most of which were involved in serious competition, was quite surprising. BMW racers were everywhere, although surprisingly there was no evidence of a BMW Owners club. There were Porsche racers sharing space with Historic Masters F1 cars, Historic F3 cars and Historic Sports cars, including Chevrons, some very rare Porsche models and Lolas. Then there were the different touring cars. The primary British representative was Jaguar but other marques included Volvo and Skoda, all presenting examples of cars which had raced on competitive series. Conveniently, this leads me to the most spectacular looking and sounding racer of the weekend.

The “TV Spielfilm” sponsored Alfa Corse 155 2.5 V6 DTM racer was quite breathtaking. It was worth the trip to Germany simply to see this awesome piece of motoring history in action. Those fitted with the 155 chip will know this to be the final version of the model which was raced in the early to mid 1990’s. It was the car driven by Giancarlo Fisichella in the 1996 season. Overall during their period of DTM series participation 155’s clocked up 38 victories and the car was certainly one of the most successful racing Alfas of the post war era.  In the final format these cars were extraordinarily expensive but pioneered the chassis and body technology which can be found today in the 4C, namely a tubular frame, very lightweight bodywork, carbon fibre and sophisticated electronics.  Nowadays the 155 Racer is an icon on the European circuits and in its day must have contributed significantly to sales of road cars.

The Alfa GTA’s of the 1970’s were wonderful to watch on the track as they provided very close racing with Lotus Cortinas and Ford Escorts. There was so much going that to turn away was to miss something. In the sports car races an ex-Bob Akin’s Coca Cola liveried 935 Porsche provided much entertainment when its waste gate chattered and shot flames out of the exhaust. 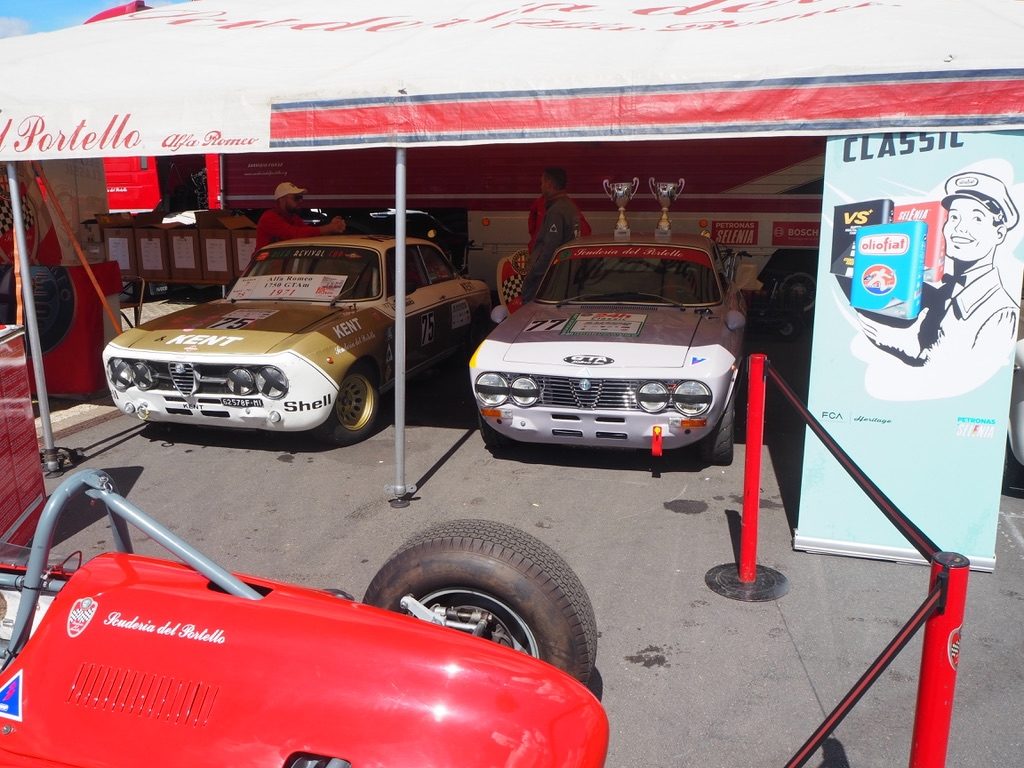 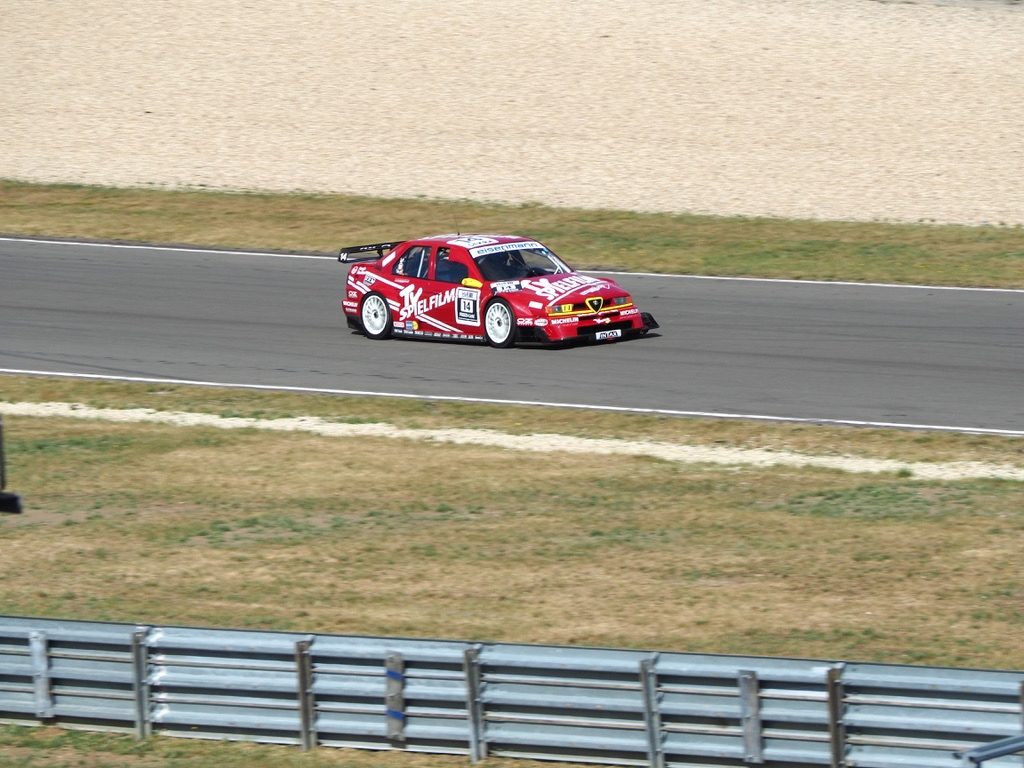 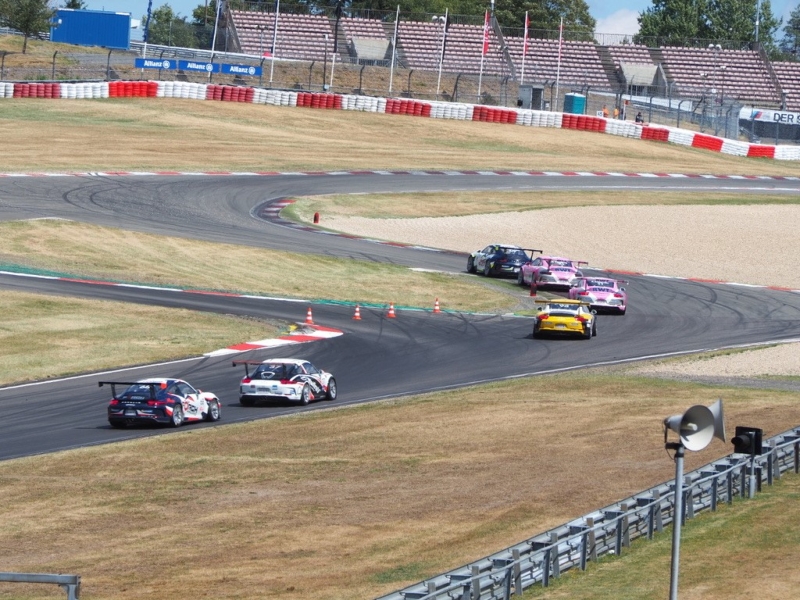 Porsches running into the Veedol chicane 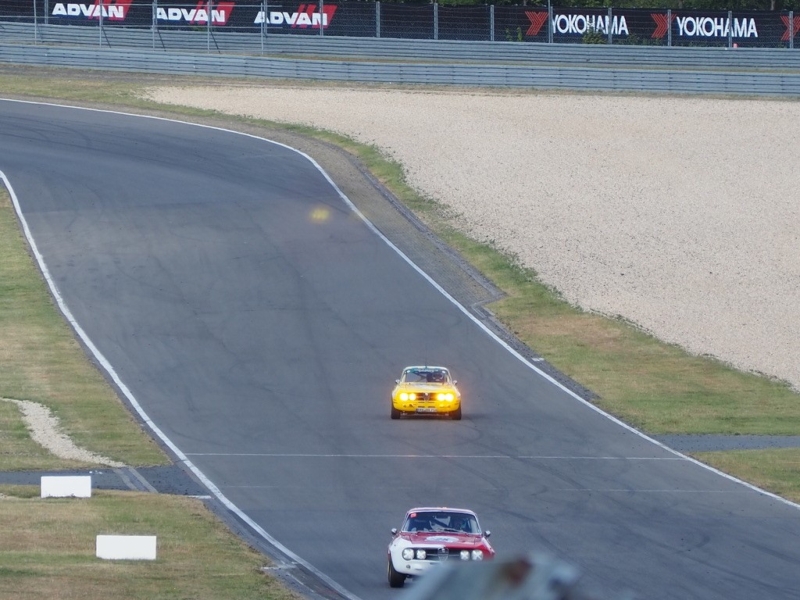 A GTA coming up the straight at full speed from Advan curve.

As well as all this machinery flying around there were some extraordinary static exhibits and displays promoting racing equipment suppliers, specialist classic car dealerships and main dealers. A good example of a dealership “special” was an XK120 fixed head in British Racing Green. This is a car you can spend hours studying from every conceivable angle. Truly a thing of beauty. 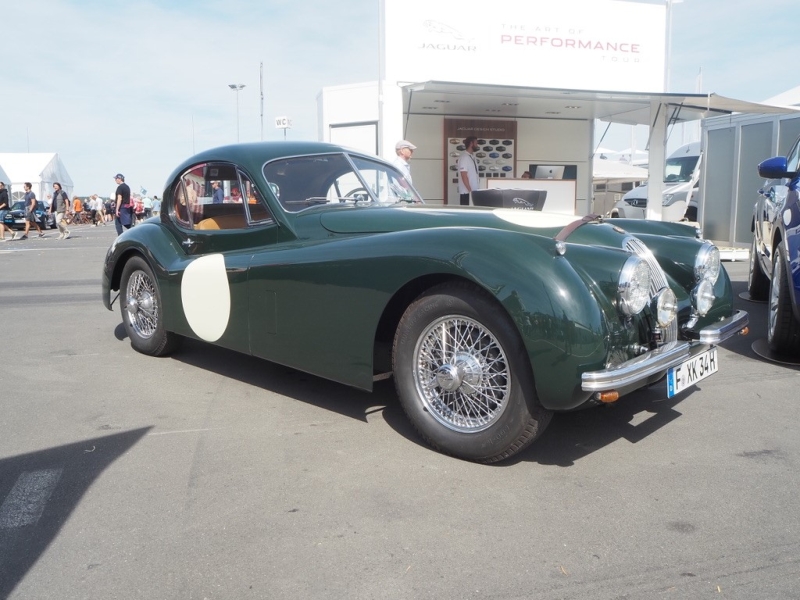 There were “specials” including an Isedera Autobahnkurier AK116i built in 2006. This is a custom built grand tourer in 1930’s style with two Mercedes V8’s in series under the bonnet so that, effectively, it is a V16! Then a selection of Skodas in all sorts of shapes and forms, from the grand and luxurious to the small and sporty. 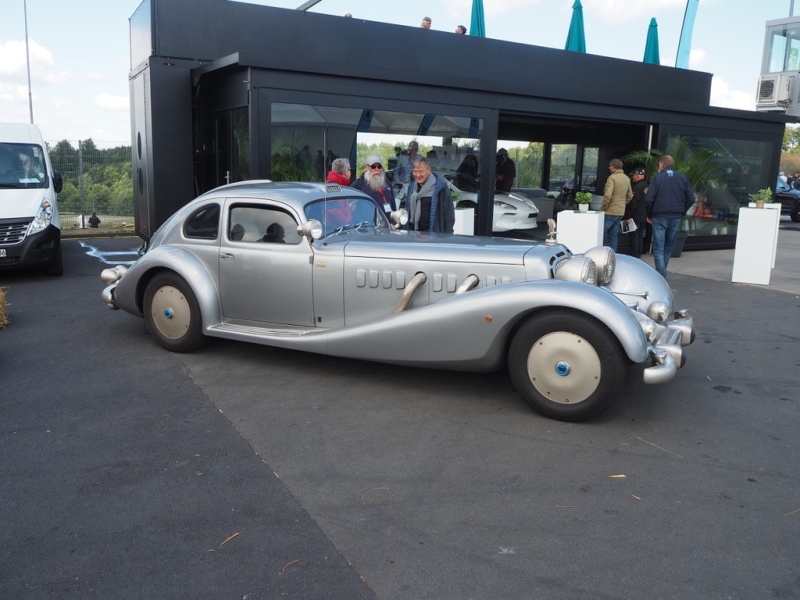 The Isedara Autobahnkurier AK 116i  but could the cool dude with the beard be the owner?

The displays, garages and pits areas were all open to enthusiasts, except obviously if there was serious work going on. A very much appreciated Nürburgring feature is that the outdoor grandstands were open for use without extra charge. This was a circuit which made everyone feel very welcome and comfortable. There was none of this “squeezing” every extra bit of cash from the customer or “over stewarding” of the public as is found on some circuits we know quite well.

The racing was split over two days and was very entertaining stuff. I stayed quite late on Sunday as some of the teams were packing up. It was all superbly organised and, for a petrolhead, quite an amazing spectacle.

Here are a number of photographs of the magic of the event: 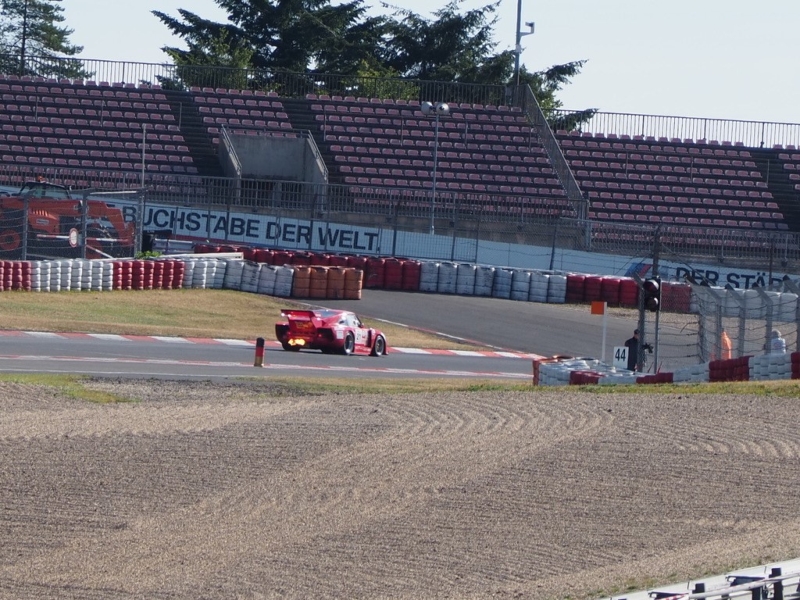 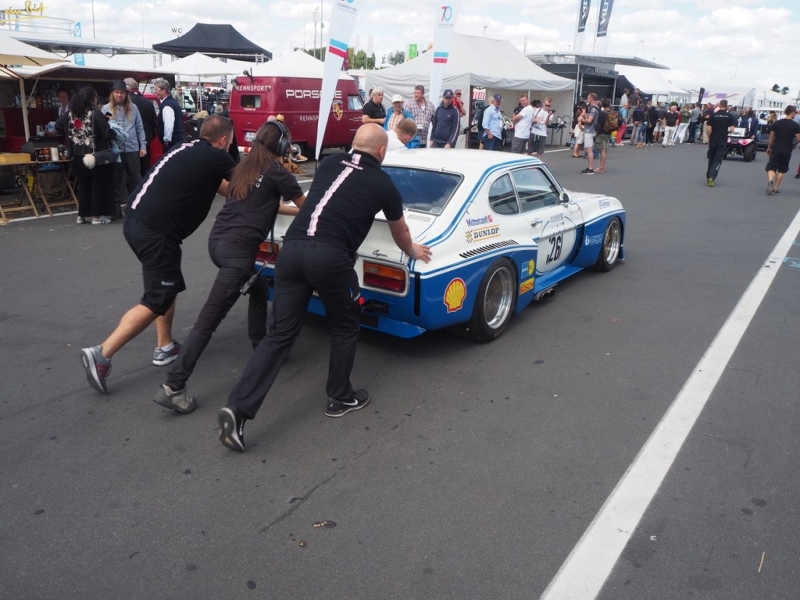 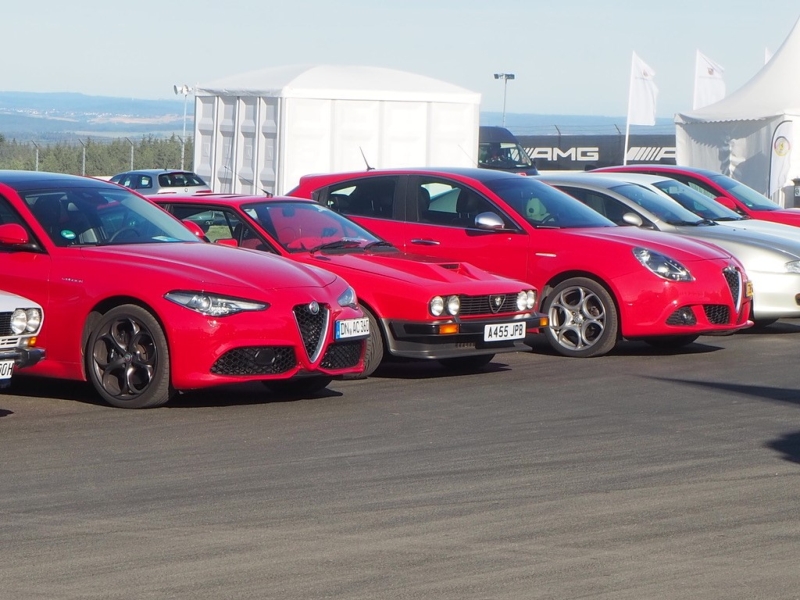 By Sunday late afternoon the GTV6 was on its own with some single seaters. It was quite an exceptional weekend and credits are due, firstly to Nick Clancy for his organisation and, secondly, to our Thai hotel manageress for her catering. Also thanks to Alfaclub in Germany for their wonderful hospitality.

Finally, this is a trip that every enthusiast should make. It is a great weekend in the company of fellow Alfa enthusiasts. 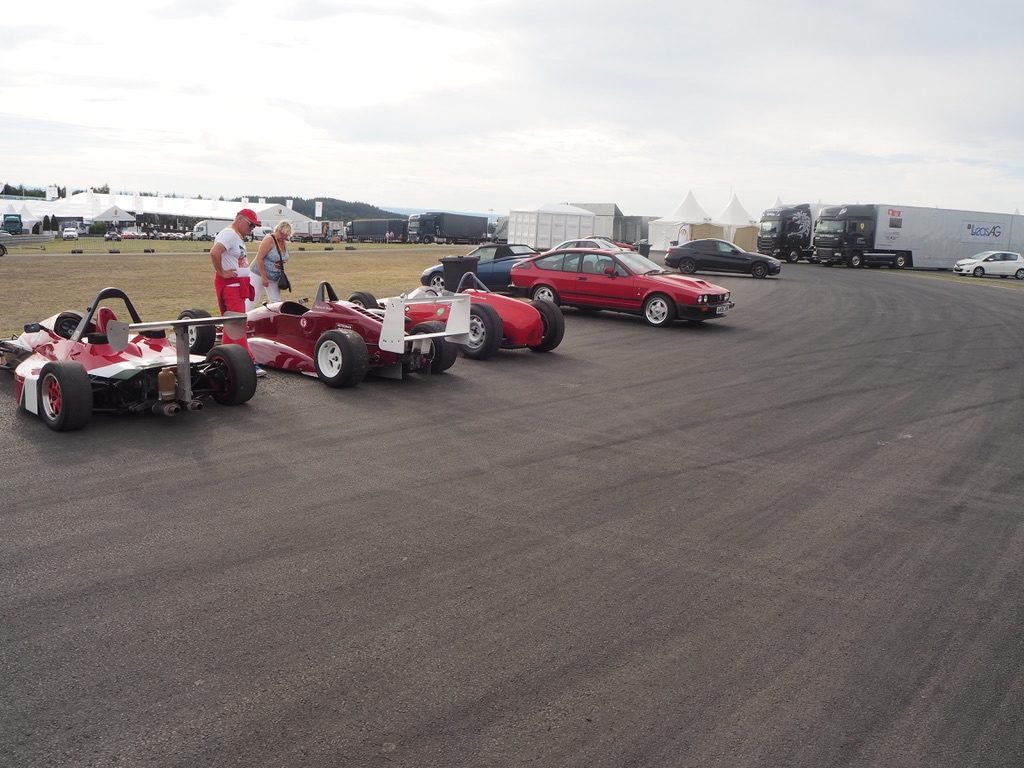