After the drama of Nürburgring I drove the GTV6 back across Belgium and France, collecting more cases of wine, and spending some time in the Somme visiting some very sobering battlefield sites. The return journey passed without incident and just before the weekend I was at home readying cars for a Rye Country Fair and the Brands Hatch Italian Festival.

On Saturday it was off to Rye in the 4C. Dog handling displays, heavy horses, gymkhana, ferrets, army parachutists and classic cars – what’s not to like!

Then, at early o’clock on Sunday 19th, the GTV6 was back on the road howling down to the Moat to meet the Kent Alfisti, engaged in a collective yawnfest in a pub car park. Then up the hill to West Kingsdown to join the queue of Italy’s finest at the main entrance. At this time of day, around 8:15 am, there is only one attraction at Brands Hatch and that is a “Kentagon” breakfast. Chris and I sat down to our fried egg and bacon and spirits were raised.

Most of you will know that Brands Hatch Indy Circuit is a small rather intimate affair on which, from certain vantage points, the cars are only very briefly out of sight. It is easy to follow progress which is handy because there usually some serious scraps going on and, like the ‘ring, you do not want to turn away or you will miss something. The races are often close and at times cars seem to be glued together.

There was a big display of Italian cars but, unlike the Spring Auto Italia show at Brooklands, the August Festival at Brands Hatch seems to allow more space for parking and display. As usual the cars were the stars and Fiats were parked near Ferraris and Alfas and everybody enjoyed
themselves. 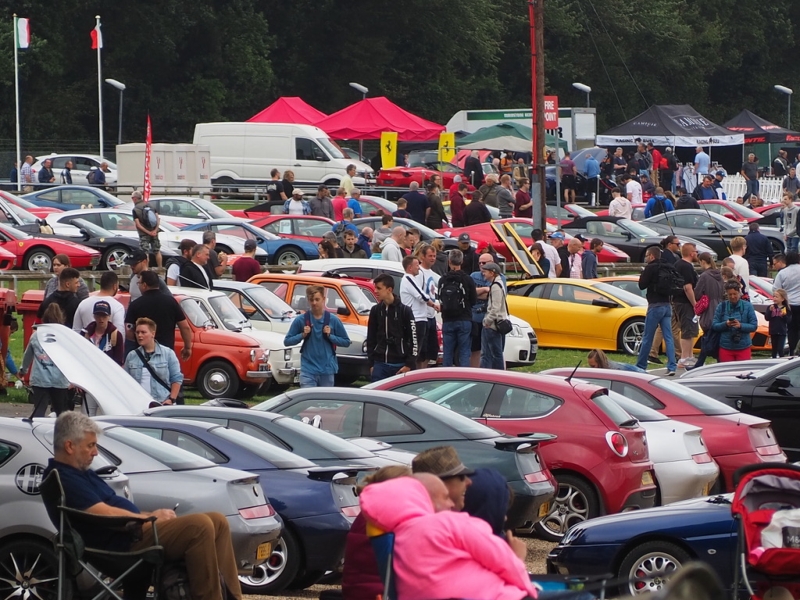 There were some rare Alfa Romeo cars, one being a blue Alfetta 2.0 litre saloon, a late four headlight model. Now I have a soft spot for Alfetta saloons as an 1800 served as my introduction to Alfa ownership and look where that has got me! I will always remember having the car serviced at Cubleys of Ainsdale, a main dealer in Southport, and being told the shock absorbers were nearing the end. The garage principal was on hand and without hesitation he suggested “fit Konis”. So I did and I do not think I have ever done anything to a car which had a more dramatic effect. The handling was instantly transformed and the car became a real BMW beater.

I remember flying along the Southport road beneath trees bedecked with political leaflets with the face of SDP’s Shirley Williams. It was not the type of liberal behaviour she would have approved of but I mastered the knack of hanging the tail out, controlling with a bit of opposite lock and slipping through roundabouts like a politician playing fast and loose with the truth. 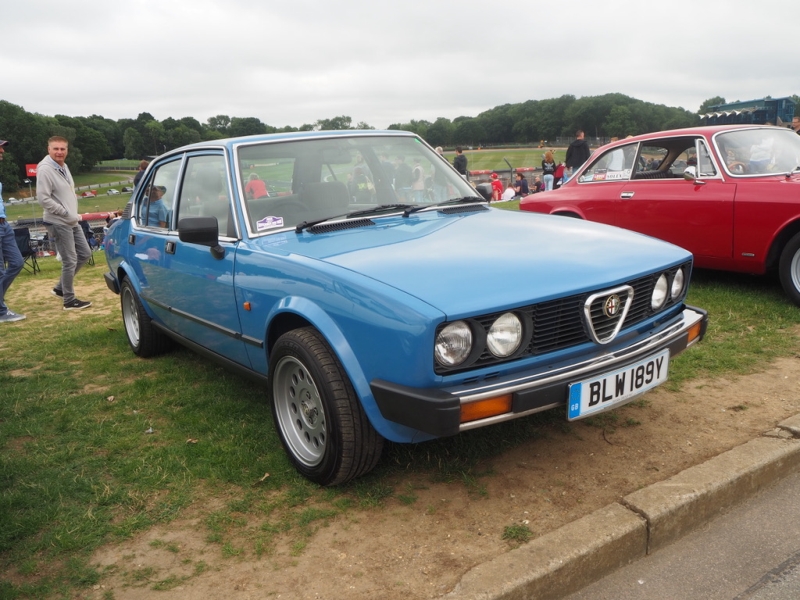 Enough of the misty eyed flash backs, there were some other fairly rare machines on show. A Lancia Thema 8.32, which was a Pininfarina design based on the Tipo Quattro platform shared with the Alfa Romeo 164 among others. These rare machines had a Ferrari eight cylinder thirty two valve engine. Various impediments applied in the United Kingdom, for example it was priced at more than £40,000 which was quite a lot for the late 1980’s car and it was in left hand drive only, so original sales were single figures. Some cars came into the country subsequently from Europe but, like the Alfetta saloon, you will be very lucky to see one on the road.

It is the rare cars which tend to catch my attention but I have a preference for those that are actually driven and not the ones detailed to within a centimetre of their existence and which are covered in clingfilm when travelling to an event. Yes, I have seen that, though not recently I admit! 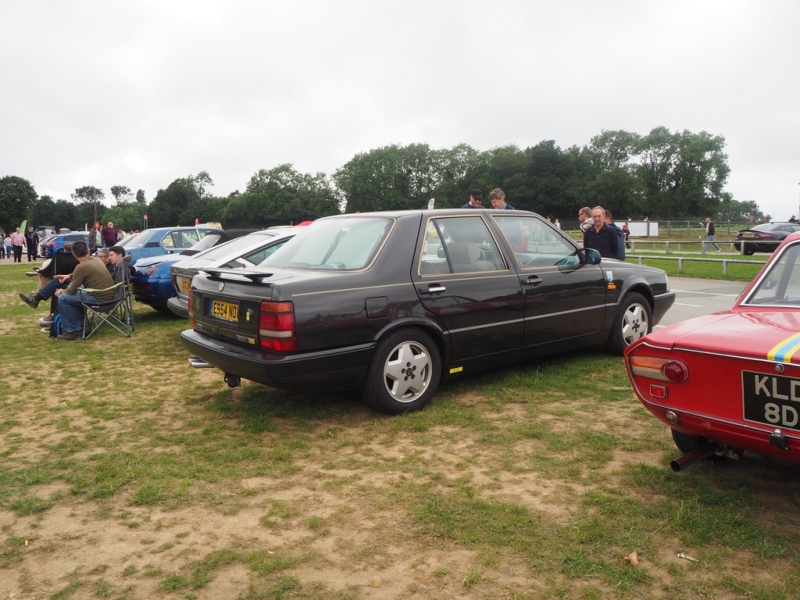 Then there were the Ferraris. Their owners generally give the air of superiority but I do not like to criticise this because I know just how much it costs to buy a genuine Ferrari spare part, basically it is the motoring equivalent of “shedloads”.

However, Ferrari ownership gives me the impression of being a subdued activity and the lucky ones who can afford it prefer to receive the accolades and admiration while engaged in solo missions. Perhaps that is a characteristic born from business or commercial success when you obviously fight to be the best and things get very competitive. You always want to think your car is the best and parking next to other cars which are pretty good, or more fashionable, or more expensive is not necessarily a comfortable experience.

Lamborghini owners, on the other hand, have a very different affliction. If you own one of these supercars there seems to be a compulsion to rev the engine at every opportunity just for the noise effect. It would be wrong to think this is attention seeking, because anyone turning up to an event in a bright kermit green, fantasy yellow, ludicrous orange or sensational purple Lambo is not going to be short of attention, oh no!. Accordingly, I can only assume it is a process which demonstrates to the owner that all those revs, namely the ones he cannot use on the public roads, are actually still there “in the box” so to speak. I mean you would want to know if your Lambo had lost a few revs would’nt you?

‘Nuf said, and on to the racing. There were Ferraris, Alfas and some Fiats on the track demonstrating the intimacy of the Indy Circuit. Take the Twinspark racers for example. They are usually close enough to one another that anti-perspirant would be a useful application before
going racing. 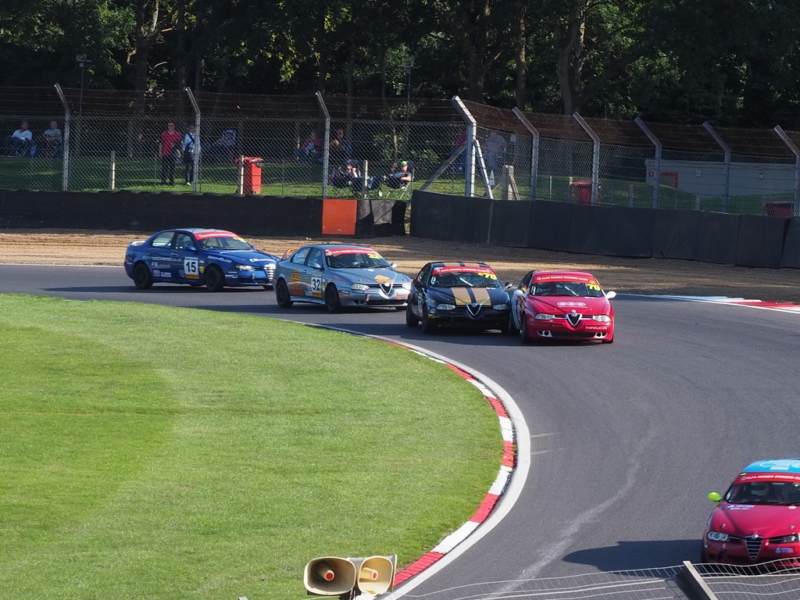 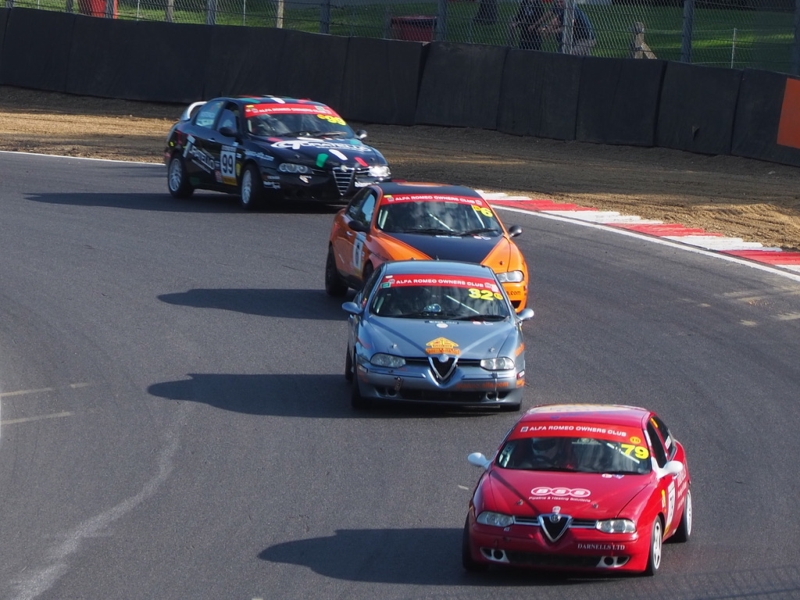 It is as well that all these drivers know each other and are friends …. I think.
Some cars were exceptional and Chris Snowden’s GTV6 fell into that category. It flew around the circuit and seemed poised and balanced at every turn.

These cars were very successful racers thirty years ago, winning championships and even rallies.

There were some heart in the mouth moments one of which occurred in the Ferrari Challenge event when a 308 took to the kitty litter in a spectacular sideways fashion. 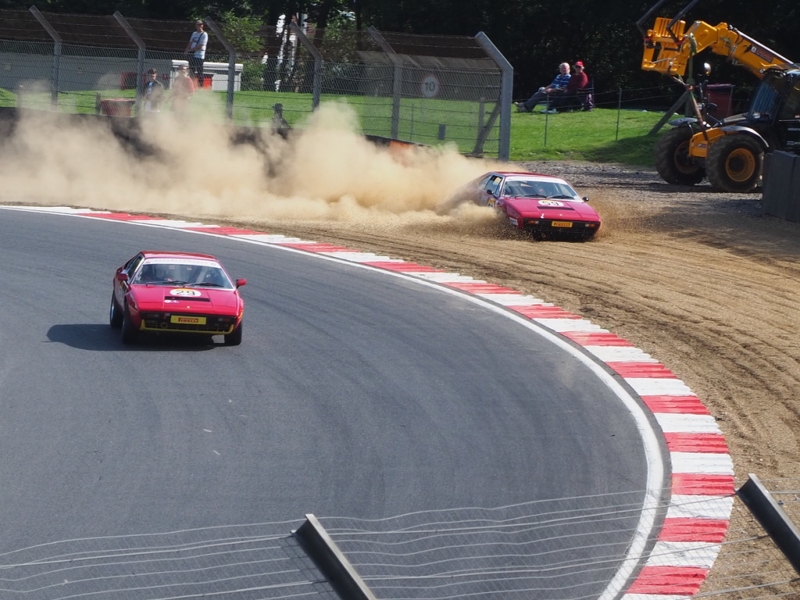 It took a while to dig the car out following which the driver was obliged to go for a foray across the grass shedding gravel in bucket loads from the wheel arches, bumpers and very intimate parts. 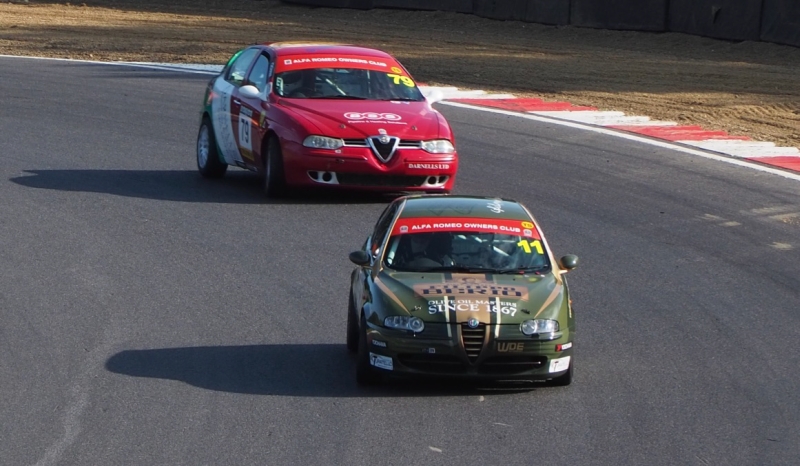 A familiar car was Andrew Fulcher’s “Filippo Berio” Olive Oil sponsored 147 which ran well. This car was present at Hever Castle earlier in the year and members had the opportunity to have a close look at what you need to do to go racing. Somehow the sponsors decals look perfect on this car.

There were a number of historic Formula 1 cars and the pick of the bunch was the Benetton B190 which is a very good looking racer with clean lines. This was the car driven by Nelson Piquet and Alessandro Nanini and it had a Ford HBA4 V8 engine. It was a successful car and won the Japan and Australia Grand Prix.

It was a most enjoyable day at Brands Hatch, perhaps not on the scale of Nürburgring but spectacular none the less. If I were in charge I would make access to the grandstands free but then the operating company are a commercial enterprise trying to turn a profit! 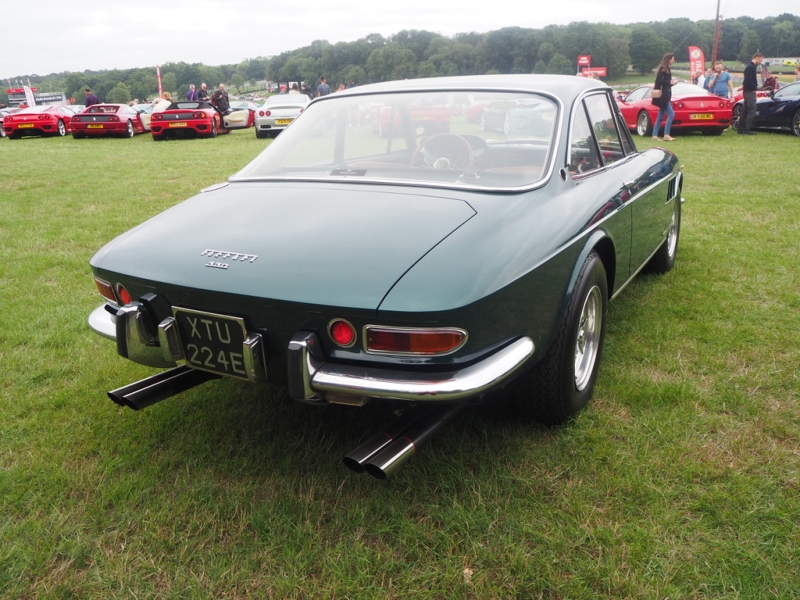 Now I always thought that the exhaust on a Ferrari 330 looked like an arrangement of pea shooters ready to spit out all manner of “bullets” at vehicles in pursuit. It is certainly one of the most impressive systems to have been fitted to a car.